MARK OKUDA’S ROCKET RIDE TO SUCCESS AT THE BROTHERS SUSHI 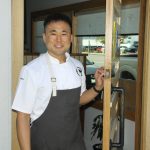 Mark Okuda eyed the slab of blue fin tuna on the cutting surface with respect. He turned it to a slightly different angle and paused the blade over the pink toro. The fat content promised a morsel that would melt on my tongue. One final adjustment and Mark drew the silver blade through the fish for a perfect slice to set atop the rice that would be one of the four pieces of negeri sushi in the final course of my omakase dinner.

I watched Mark from my stool at The Brothers Sushi restaurant in Woodland Hills CA, where he is the owner and one of the chefs. In an earlier feature at Table Talk I wrote of the courage he and his wife showed as he left a job as the Number One chef at a Michelin-starred sushi restaurant to enter the world of restaurant ownership. Now, I realized it was time for an update

Life has been like a rocket ride during the four years since Mark opened The Brothers Sushi in October 2018. With a partner, he bought a marginal sushi restaurant that served mostly sushi rolls. He closed, gutted and renovated the place and re-opened with a vastly upgraded menu. In the subsequent four years The Brothers Sushi became the go-to sushi place for sushi lovers in the west San Fernando Valley. It has been featured in the L.A. Times and Westways and Los Angeles magazines, earned a Michelin Guide listing, rode out the pandemic that forced other restaurants to close, and now Mark has opened a second place, this one in a trendy Santa Monica neighborhood.

You don’t accomplish all that unless the fish you serve is top quality and prepared and presented with care. There are any number of sushi restaurants around that exist with less than prime food because they are “in the neighborhood”, or they are inexpensive, or people don’t have discerning tastes. The Brothers Sushi is in a nice neighborhood; it is not inexpensive and not overly pricey; and the people who dine there tend to know the difference between sushi that is mediocre to adequate and what is off-the-charts good.

At the front of my mind when I interviewed Mark was how he came through the COVID-caused shutdown which hit 18 months after he opened. He told me he shifted from dine-in to take out after being closed just one week. It was either that or risk losing his already successful and fast rising restaurant. Before the pandemic he was doing about one take out order per month. Suddenly, it was all take out from a new menu of set items created for that purpose. He credits Instagram for his success in letting a loyal customer base know they could still get top grade sushi and sashimi. The word spread from there.

“We didn’t even have any take out boxes,” Mark said. “The hardest part was having to furlough employees. The servers were hit the hardest.”

Things are back close to normal now, with just five to 10 percent of the business in take out. The restaurant is full most nights and stretched on weekends. The patio Mark opened for outdoor dining as COVID restrictions eased is a warm and welcoming space that also is full most of the time.

COVID brought another big change to Mark’s operation. The famous downtown fish market stopped allowing access to the building. Sushi chefs no longer can inspect the fish and pick out what they want. Mark turned instead to a place called The Joint, not more than eight miles from the restaurant. The Joint not only provides top quality sushi grade fish, they air dry it, a process that removes most of the water and concentrates the flavor. Mark installed an air drier in the restaurant, buys most of his fish from The Joint and houses it on site.

The Joint, by the way, sells retail and has become the fish store I always wished I had near home. As a side benefit, air drying removes the water from the skin of the fish. Now, when I grill a piece of striped bass or a whole branzino, the skin comes out golden and crisp. None of that sticking to the pan or curling that comes with high water content.

Mark serves about 500 pounds of fish a week to customers at the Woodland Hills restaurant. About 100 pounds of that is tuna, including the highly prized toro, cut from the tuna belly with plenty of marbled fat. The rest is a high-quality array of traditional sushi restaurant offerings – albacore, salmon, yellow tail tuna, kanpachi, halibut, uni from Santa Barbara or Hokkaido, and scallops. But also such treats as sea bream, ono, ora king salmon from New Zealand, nodoguro, kinme dai, kurage jelly fish from Okinawa, and other taste sensations.

Then there are the dishes where Mark’s creativity takes hold. Not just agedashi tofu but agedashi black sesame tofu with squash sourced from Girl & Dug Farm in San Diego. I could make a meal of it. Squash blossom tempura. Wagu steak in truffle butter and seasonal truffes. Eggplant and Wagu beef. Oysters from Seattle.

With such a variety of items available, I often create my own version of an omakase dinner rather than order one of the two omakase meals on the menu.

On a typical day, Mark is awake by 6:30 or 7 a.m. He phones his fish and produce vendors to confirm his orders. Then he takes his 15-year-old son to school and does some shopping for the restaurant. He’s at the restaurant by 11 a.m. to start getting ready for a noon lunch opening. By then, some of the staff has put together a list of things that need to be acquired.
Before he opened the new place in Santa Monica, he might take a short nap after the lunch service ends at 2 p.m. By 4:30, it was time to start to prep for the 5:30 dinner opening. Then he would stay after closing to help with clean up, put together the fish order for the next day and confirm the next day’s reservations. He’d be home some time between 11 p.m. and 1 a.m., after hanging out with the staff to review the day’s service.

Now, with a second place to oversee, he relies on carefully selected staff members to get some of those things done. He says he wants to build a team and ultimately open a third restaurant.

“I want to guide young sushi chefs, help them develop, the way others helped me,” Mark says. He credits what he learned at those earlier stops with giving him the courage to tackle restaurant ownership and the knowledge with which to build a success.

All that is well and good. But it’s Mark’s personal style and taste, and his creative approach to the food and the business that have fueled the rocket he’s been riding. That and some flat out fantastic fish prepared with care in innovative as well as traditional ways.