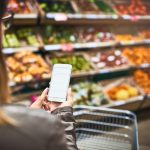 They’re like a swarm of bees as they buzz through the supermarket. They race from one display to the next, hurriedly plucking items to drop in their carts. In one hand they hold a cell phone or a shopping list with a fancy full-color letterhead. They consult it after every stop. They don’t push their carts with their one free hand. They pull them along behind with their trailing hand. They look often at the signage on each aisle as they search for items. Clearly, they aren’t regulars at this market or they’d know where things are and follow a more efficient route.

They are the supermarket surrogates who have blossomed during the pandemic. Most appear to be in their 20s and from observation there seem to be more males than females. They move at nearly a dead run, anxious to fill one customer’s order, pocket the fee and maybe a tip before moving on to the next customer.

A friend, who used a service a few times in the early days of the pandemic, says she doesn’t anymore because her husband and daughter objected. They both cook. She believes serious cooks are too discerning to allow others to select their produce, meat, fish, or poultry. She’s probably right.

As I watch them dash from a display of hard-as-baseballs avocados to a bin of cellophane-wrapped lamb chops, I wonder if they are inexperienced shoppers or they just didn’t care about what they deliver to the doorstep of customers they never will face. So, I asked a few friends about their experiences.

Each related anecdotal foul ups, sometimes funny, but seemed to shrug them off as the cost of safety in a dangerous time. A turnip delivered in place of the jicama that was ordered probably disrupted the night’s meal preparation. What do you do with 12 bunches of bananas if you ordered 12 bananas? A lot of freezing and banana bread going on. A pound of serrano chilis when you only wanted one of the long green babies could be challenging. Keurig coffee pods when you don’t have a Keurig coffeemaker could make you testy when looking forward to that first morning cup. How about four bags of russet potatoes instead of four potatoes?

One friend received a bag meant for someone else and learned the service wouldn’t come pick up the miss-directed groceries. Of course, that meant someone else had received the items she ordered.

Order two strip steaks and get one that’s one-inch thick and another than half-an-inch thick makes for a cooking time challenge. So, share one of them tonight and freeze the other for another night. Order one brand of butter, then select a different one when informed the first is not available and then get both of them? Oh, well, you can always use more butter.

One friend told me she can’t always be sure if the price listed is per pound or per piece. She ordered 40 items one time and two of the five bags didn’t arrive. When she re-ordered the missing items, she received the entire order a second time.

Mostly, the people with whom I spoke have settled into the routine. They learned how to shop remotely and shrug off the foul ups. As they became vaccinated and boosted and gained confidence in the people at their favorite stores, they started to mix in person shopping with surrogate shopping.

“My time is valuable,” one said. She’ll continue to have things like bottled water and packaged goods delivered to shorten the time spent shopping. It will be in person for produce, meat, fish and fowl.

As for me, I never considered surrogate shopping. I opted instead to get up early and be at the market for the 7 a.m. senior citizen hour. I’d go once a weak for the heavy load and make a quick trip on another day if we were running low. We locked down pretty tight before the vaccine became available. The occasional trip to the market was refreshing.

A supermarket is like a community center to me. I chat with other shoppers, exchange recipes for split pea soup. We help each other find a ripe melon. And at the checkout stand I might sing a duet with the clerk. She’ll do the Spanish language version and I’ll do the English lyric for Solamente Una Vez. I learned she has two pianos at home and is a Barry Manilow fan.

I never go grocery shopping alone. The crowd surrounding me lives in my head. They inform the choices I make as I traverse the aisles or wander masked among the booths at the weekly farmers’ market.

Jacques Pépin is there with a twinkle in his eye and a gentle reminder that cooking isn’t complicated or difficult. Bobby Flay challenges me to use more chilis and let my imagination run free. Pati Jinich urges me to do an adobo pork shoulder. Lidia Bastianich makes certain I buy only the sword fish with bright red blood lines. They all crowd around me. Mary Ann Esposito, the ghost of Irma Rombauer of Joy of Cooking fame. They are there by the dozens, these people who have filled my head with knowledge and inspired my life of culinary passion.

I look for the splits where sugar has seeped out of the watermelon and hardened. I heft it to my shoulder, listen for the hollow sound as I rap my knuckles on it to test for ripeness. Mom taught me that. I buy flanken for cabbage soup or beef, barley and mushroom soup because mom said it’s better than short ribs or any other cut.

Need an eggplant. Make it smooth and shiny, deep purple but green near the stem, and it should feel lighter than it looks. Mom’s recipe for Romanian eggplant salad is in my book Cooking for a Beautiful Woman (www.LarryLevineauthor.com.)

Mom was a better shopper than she was a cook. There were some things she prepared in the kitchen very well. Others, not so much. But she had an instinct for a quality supermarket, butcher shop, greengrocer, fish store, or virtually any other place where food was sold. She would chat with the owners and their staffs, get to know them and let them guide her to the best available products. That’s probably where I learned to make friends with the people who work in the shops and markets I attend.

When I gently squeeze an avocado to test if it’s ready to eat today or if it will be better held for the next day, it’s Pati Jinich who guides my hand. It can’t be soft, must be firm with a bit of give, she taught me on her PBS show Pati’s Mexican Kitchen. When I pick the lamb chops with the right marbling of fat, I feel Jacques Pépin smiling over my shoulder.

I know the size and shape of the carrots I like. I know how big a piece of ginger I need. I can switch to a different cheddar cheese if they don’t have the one I want. No surrogate shopper can do all that for me. I understand the reasons why shopping services are attractive for so many people. But for me, I need to make sure I get only the freshest mushrooms.