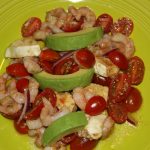 I was in the kitchen a few nights ago, making the dressing for a tomato salad (recipe below) when something jumped to mind: when it comes to extra virgin olive oil and balsamic vinegar price usually equals quality.

I’ve known this for a long time but only think about on infrequent occasions, like when I’m shopping for one or the other of these products. This time the inspiration came from the bottles of extra virgin olive oil and balsamic vinegar on the counter with their ultra-fancy labels.

The olive oil is from Spain, produced from trees planted before Columbus set sail on his journey to find the new world. It’s bottle number 320 of lot 5/3629 vintage 14/15. It was given to me as a gift by my son, Lloyd, and daughter-in-law Edie. I use is sparingly, mostly to finish off a dish just before it goes to the table. For the tomato salad this oil gets drizzled over the finished product.

I have four other olive oils in my pantry. The base olive oil for this tomato salad dressing and most of the other things I do is a first cold pressed extra virgin produced in Italy and stamped with the North American Olive Oil Assn. seal of purity. It’s a mid-price oil.

Two specialty olive oils in my pantry, not used on this salad, are from California trees and bottled exclusively for Corti Brothers market in Sacramento. One boasts of a robust and peppery flavor, the other of a butter and sweet flavor. Theses flavors are obtained from the olives themselves and the soil in which the trees grow. No flavoring is added.

What’s note-worthy about these last two is that Darrell Corti, one of the brothers in the market’s name, is the person who first ignited my appreciation of the differences in olive oils. He of an internationally acclaimed palate for tasting wine and olive oil, had been a judge at some international competition a decade or so ago. An Australian olive oil won that competition and Darrell brought some back to sell at the Sacramento market. The aforementioned Lloyd and Edie bought a bottle for me. One taste and I knew how large was the deficit between quality olive oil and my appreciation of olive oil.

The final olive oil I have on hand is an extra light. It’s of no notable heritage and not at all expensive. I use it only for sauteing and frying because it will achieve a higher temperature without burning than will extra virgin olive oil.

To extend my olive oil education I read Tom Mueller’s Extra Virginity / The Sublime and Scandalous World of Olive in which he laid open the underbelly of the olive oil industry and the ongoing battle to assure olive oil purity. He traces the multiple uses of olive oil through millennia and introduces some of the hard working artisan producers who struggle against commercial pressures in their quest to preserve the ancient traditions of olive oil production.

It’s a fascinating book that taught me the best olive oils will burn the back of your throat when swallowed, some Italian children drink a teaspoon of olive oil every morning, and how to tell the real thing from the frauds. He also recounts the role of professors at the University of California at Riverside in helping boost California olive oils to world class status.

I learned about Balsamic Vinegar while researching an article for Table Talk. What launched me on that project was the discovery of white balsamic vinegar. I learned white is the natural color and the darker color is produced by a long and complex aging process. The best balsamic vinegars are aged for years, even decades, which gets us to a quote from Kermit Lynch’s classic Adventures on the Wine Route / A Wine Buyer’s Tour of France.

“Most people do not understand that it cost more to make a good wine than a mediocre wine. Right off the bat, there is the question of quantity, the yield per
acre. If you allow your vines to produce twice as much juice, your wine will
seem diluted but you will have twice as many bottles to sell.”

The same can be said of balsamic vinegar: produce it and bottle it quickly, charge less, sell more. Now I look for balsamic vinegar from Modena that has been barreled at least 15 years, 25 years is even better. The bottle I had on the counter for that tomato salad was by a company around since 1605 and has been collecting medal at competitions for more than 100 years. What worries me is that nowhere on the label does it say anything about how long the vinegar was aged and that’s usually not a good sign. Good as this is, when it’s gone I’ll probably find something else.

The mulling over of olive oil and balsamic vinegar led me to a truism I discovered long ago about wine: the higher prices on the restaurant wine list usually will lead to the better wines. Not always but mostly. The caveats here are the fad factor and the snob factor. Certain wines become popular with little regard to quality. They rage for a time, commanding inflated prices then crash and give way to the next fad.

Some people will pay more than they should for a wine from France or Italy. Others are more familiar with California wines and feel more comfortable paying a little more for what they know. Me? I’m very comfortable with California and Italian wines.

What to consider in comparing prices of wines is to not mix apples and oranges, or more accurately cabernets and pinots. If you want a cab then select the higher priced cabs in you price range on the menu. Don’t compare the prices of the cabs to the prices of the zinfandels. This wisdom about wine prices applies well to restaurant lists, but not necessarily to retail sales of bottles.

Wash and dry the tomatoes. Cut them in half, lengthwise, and put them in a class bowl. Sliver as much red onion as you think you want, certainly enough to notice it when you’re eating.

Let it rest for 30 minutes to an hour at room temperature.

Taste a piece of tomato and adjust the amount of oil and/or vinegar to your taste.

Add the shrimp and toss everything together to make sure all the ingredients are coated in the oil and vinegar.

Taste another piece of tomato and add more oil and/or vinegar to taste.

Cut the avocado into one-inch pieces and toss it with the tomatoes.

Drain the cheese and cut it one-inch chunks and put the cheese on top of the tomatoes.

Now is when you want to sprinkle on some of that really good, really expensive olive oil, making sure to cheese gets a healthy drink of it.

Toss everything together and serve.

This makes two nice entrees for dinner, or four to six appetizers. Serve it with a favorite bread, preferably something crusty and crunchy like a baguette.

*The tomatoes I buy are packaged under the name of Cherubs. They are the size of cherry tomatoes, but these are oval in shape.

**I use two different levels of olive oil. A medium prices every day oil for the base and then the good stuff to finish.

***You want balsamic vinegar from Modena Italy, carrying the PDO seal, seal and aged as long as you can find and afford. The older the better and more expensive. If you don’t want to spend as much as the PDO costs, at least make sure it has a PGI label.