CULINARY ADVENTURES IN A STRANGE KITCHEN 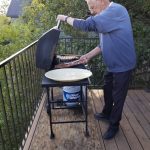 On the last night of my 82nd year I did two things I never had done before. 1) I grilled hot dogs on a barbeque. 2) I ate Nathan’s Famous Hot Dogs with a knife and fork.

On the first night of my 83rd year I did two more things I never had done before. 1) I grilled lamb riblets on a barbeque. 2) I grilled on a barbeque for a second consecutive night.

On the third night of my 83rd year it was two more things I never had done before. 1) I grilled for the third time in a week. 2) I grill a nice thick ribeye steak.

None of these were voluntary. In our post-vaccination euphoria Jennifer and I rented a house overlooking Lake Arrowhead in the San Bernardino Mountains. We arrived on a Monday afternoon. The view of the lake from all three floors of the four-bedroom house was as beautiful as advertised. The rest of the house was OK. Thirty-five steep stone steps down from the street level parking space was a challenge. I had to make 11 trips up and 12 trips down to get everything from the car into the house. Once again I gave thanks to the surgeons who did my coronary bypass surgery 13 years ago as I did 385 total steps up and 420 steps down – 805 in all – to bring everything in from the car.

Next up it was time for me to inventory my favorite room in any house. This kitchen was dreadfully under-equipped. A random selection of pots and pans were totally unsuited for cooking anything in the oven. What was there mostly was crusted with grime. The large frying pan had a rounded bottom. I wouldn’t be baking or broiling anything on this trip, not even the rack of lamb riblets I brought for my birthday dinner. I could do some meals on the stove top with some considerable effort.

From out on the upper of the two decks over-looking the lake there came a call from the gas grill. Now, in the first 81 years of my life I may have grilled on a barbeque half a dozen times. All of them were July 4 holidays at my late sister’s house, where I made Santa Maria b-b-q chicken and ribs along with Santa Maria pinquito beans and salsa. My one condition was that the clean up of the grill would be done by anyone else who wasn’t me.

I lifted the hood on the grill on the deck. The last people who used it and the professional cleaning crew clearly felt no obligation to clean it. It was caked with black, hard grease. Faced with little choice, I grabbed the wire brush on hand and went to work.

In the market our first morning in town I foraged for the stuff of lunches and a second-night dinner. The first night had been an assortment of cheeses and crackers we brought with us.
I wasn’t yet ready to tackle real meat on the grill but I found something to warm my Brooklyn heart, a package of five Nathan’s Famous Hot Dogs. These would be my practice tun at the grill. But no hot dog buns. Jennifer is staying away from bread to the extent possible and I had no need for the minimum-size package of six buns. From the deli counter I picked up some barbequed baked beans with pork.

I did those hot dogs like I had been doing them all my life. Nathan’s Famous Hot Dogs are part of my birth-right. I heated the grill, made a little slit along one edge of the franks (that’s what we called hot dogs in Brooklyn), put them on the grill and closed the lid. I checked on them every few minutes, turned them occasionally and served them picture perfect. If I don’t know what a perfectly grilled Nathan’s Famous frank should look like, no one does. I’ve been eating them for some 75 years served right from the grills at Nathan’s Famous Coney Island.

Emboldened by my hot dog success I was ready to tackle the birthday riblets. I had seen a guy on a cooking show do a rack the week before. Dry rub, 45 minutes on the grill, glaze the last 15 minutes. I even remembered the fundamentals of the dry rub – salt, pepper, granulated garlic and granulated onion. I did a quick internet check to review technique for lamb riblets and found them to be all over the map. From low heat to high heat. From 45 minutes to 3 hours. I worked it out. 350 degrees for 45 minutes. Fat side down then fat side up. All was going well until I applied the glaze. Some of it dripped down and caught fire. I got the riblets out before they burned. They had a black char but still were edible. After all, don’t they have burnt end competitions at b-b-q festivals?

Undaunted, I itched for a return bout. This time it would be at the top of the grilling mountain, a ribeye steak. I got a nice one at the market in the Village, big enough for us to split. I took it from the fridge half hour before cook time and applied the same dry rub. I lit only one of the three burners in the grill, figuring I’d get the char there and finish it with indirect heat. 400 degrees. Five minutes. Turn it. Smile at the perfect grill marks. Five minutes on the other side. Move it to a plate and make a slice because I had no meat thermometer. Perfect. Cover it with foil and let it rest while I finished the stovetop fried potatoes.

There it was. A perfectly seasoned, perfectly grilled, medium rare ribeye steak with perfect grill marks.

What did we do for the other three dinners? It doesn’t matter. I did them on the stove top and they were fine. But I already had my victory. The world’s oldest rookie grill master. Will I now buy a gas grill for the house? Sure, if someone will volunteer to come clean it after every use.