A SLICE OF LIFE / DINING IN A TIME OF PANDEMIC 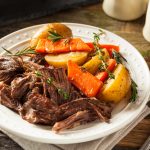 I doubt it’s a world record. It probably isn’t among the longest current streaks. But it’s a personal high of which I am proud.

A few nights ago, Jennifer and I ate our 300th consecutive pandemic-inspired home-cooked dinner, pot roast with potatoes and carrots. During this stretch there have been no take-out dinners and no meals in restaurants, indoors or outdoors, not even in those periods when it was allowed. As the chief cook in the house, I’ve prepared every one of those 300 dinners and I’m loving it. Jennifer handles the clean up after each dinner and says she doesn’t mind.

There are people in this world who eat at home every night of every week of every month of every year. They never go out and they never bring in either for financial reasons or cultural reasons. They are the real heroes. For them dinner out may mean at the home of a relative or friend.

What I’m doing is a matter of both necessity and choice. I didn’t start out last March with this in mind. I was just going to cook dinner at home to protect us during the pandemic with no notion that I’d still be at it 10 months later. We are each passed 80 years old and Jennifer has a number of underlying conditions that put her at particular risk. There’s no way we would be less than diligent in our vigilance in keeping the virus out of the house. So far we’ve been successful.

It helps that cooking is my number one hobby and one of my greatest pleasures. I’m not playing golf partially because of the pandemic and partially because of frisky back issues. We’re not able to visit our sons and their families, including our four grandchildren. We can’t travel. Instead, I spend each day writing and cooking. And for a food writer these are not easy times. As a political writer, however, these are golden days. (www.thepoliticaldish.com)

How I shop and plan meals has changed dramatically. Pre-pandemic I would stop at the market on the way home from the office each evening and buy what we were going to eat that night. Now, I don’t go to the office and I spend senior citizen hour at Gelson’s market every Tuesday morning. Our freezer, once home to nothing but home made stocks, is loaded also with enough meat, chicken and sausages to permit daily choices for at least three weeks. Each day we decide what we will have the following day. I get it out to defrost and I make mental notes of the next day’s schedule to blend my writing time with my cooking time.

In the last 10 months I’ve relied heavily on the 104 recipe in my book Cooking for a Beautiful Woman (www.larrylevineauthor.com). The biggest change is that I’ve become a fairly proficient cook of Mexican food. That comes from watching Pati Jinich’s Pati’s Mexican Table on PBS each week and from having bought her cookbook.

During this stretch I’ve cooked a wide array of different ethnic meals. In addition to Mexican there have been Italian, French, Chinese, Japanese, Jewish, Greek, Basque, Indian, Romanian, Russian, English, American and a number that fused together multiple ethnicities. I’ve created new recipes and relied on some old hand-written ones my mother gave me or I copied from newspapers and magazines over the decades. I cleaned out my recipe boxes and files and uncovered some old gems that I hadn’t done in decades. I’ve cooked beef, pork, lamb, sword fish, Petrale soul, salmon, scallops, shrimp, soups, stews and entrée salads.

Often, I’ve wondered how other people are handling this challenge. So I asked a few dozen friends to tell me of their experiences. The overwhelming majority said they are cooking more and eating out far less. Most said they are having take out more frequently but they prefer by far to pick it up themselves to having it delivered.

“I’m experimenting with new things to cook now that I have the time,” one friend said.

Another said, “I look forward to dinner as the highlight of my day. Early on I really wanted a good burger. I have been experimenting in making my own and I’m enjoying the experience. I know the burger will be hot and fresh and I vary the bread options. We are doing the same with French fries. There’s nothing worse than cold fries. The best thing is we are just using our own old pots and pans and have not bought any fancy kitchen equipment.”

“With more prep time because I’m working from home, I can do more elaborate meals. We’re having less takeout and not going out at all,” a third friend wrote.

A few single friends told me cooking for one always has been a challenge and that hasn’t changed. “The issues of portion size, waste and leftovers are still there,” one said. “I rely more on frozen prepared meals. But there are some good restaurants that offer complete dinners to take home and just re-heat and plate.”

Virtually everyone said they have made either no accommodations or very few to cope with dining during the pandemic. No meals with friends, no restaurants, no indoor restaurants was the near unanimous response. A couple of people said they have taken to ordering their groceries online and having them delivered to their doorstep.

“For delivery we primarily use Grubhub but also sometimes Door Dash and occasionally Postmates. Sometimes the online menus don’t match the actual menus or are missing some favorite items. The addition of delivery-only ‘ghost kitchens’ is also new and interesting,” a friend offered.

Another said, “All this cooking means a lot more dish washing. Maybe you should do a review of dishwashers because they are getting heavy use. And we have more leftovers, which we can make for lunches or can be turned into something else. I roast a lot of veggies for dinners and then the leftover roasted potato, carrots, cauliflower or asparagus get chopped and added to a salad for lunch or as a side salad for another dinner.”

Then there are two of my favorite comments: “When this is over, I plan on making up for lost time with dining out,” said one friend.

Another wrote” “We have been buying a lot of cheese, expensive nice cheese, and fresh nice baguettes or peasant breads. And higher quality butter, which we never paid attention to before. But now we get the Irish butter or another small batch butter that is three times the price of the usual. These small indulgences help ease the misery of the pandemic.”

I love these two because Jennifer and I have said and done the same things.

“When this is over, we’ll probably not have dinner at home for six months,” I half joked one night. “There are so many restaurants to catch up with.”

And we have done that same thing regarding cheese and butter. No more tubs of whipped butter. Now it’s imported butter from France. It’s not as good as what you get in France but it’s a giant step in that direction. And we’ve had a few of dinners that consisted of four or five different cheeses, a variety of crackers, fig spread and nuts. Always with a bottle of Gavi. How civilized.

POT ROAST
(from Cooking for a Beautiful Woman – www.larrylevineauthor.com)

Trim the large pieces of fat from the roast. Divide the roast by separating it along the natural seams.
In a large frying pan sauté the onions in the oil until they just begin to brown. Remove the onions from the pan. Sear both sides of the meat in the pan.
Remove the meat from the pan. Pour in half a cup of water and use a spatula to de-glaze the pan. Bring the water to a boil and then turn the light down to low.
Return the meat to the pan. Layer the onions on top of the meat. Add another half cup of water. Bring the water to a slow boil and cook the meat covered for 1 hour. Check regularly and add more water as needed, half cup at a time. After 1 hour, turn the meat to the other side. Spoon the onions on top of the meat. Add 1 cup of water. Bring to a low boil and cook covered for one more hour.
With 45 minutes remaining, add the carrots. Make sure there’s enough water to cover the carrots. With 35 minutes remaining, add the potatoes.

As an alternative, you can cut the original cooking time to 90 minutes. Remove the meat to a plate and cover with tin foil. Put the pan in the refrigerator. The next day, skim the congealed fat from the water. Return the meat to the pan and bring the water to a boil. Then add the carrots and potatoes.