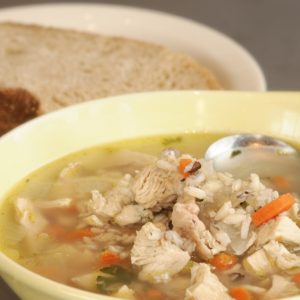 I went out to bring in the mail yesterday afternoon and it was cold. Sunny, but cold.

I went out to bring in the newspapers from the driveway this morning and it was cold.

The calendar still says autumn but it already feels like winter. Even here in Southern California. Imagine what it must be like in much of the rest of the country.

Winter to a food writer and dedicated home cook means soups and stews and in any self-respecting Jewish household the season must start with chicken soup. Portions need to be stored in the freezer to ward off colds and combat those that sneak through our defenses in the months ahead. So we’ll start our soup writing season with what has been jokingly called Jewish penicillin. It’s said jokingly but it’s no joke. The name is well-deserved because it helps cure not just the common cold but also all manner of other maladies, including flu and chest congestion. There are generations of anecdotal evidence to support this cultural belief and now there’s actual proof.

My mother’s freezer was never without portions of chicken soup in autumn and winter. We would drink it hot from a cup like some kind of elixir any time we complained of a sore throat or had a runny nose. Or we would have it in a bowl with egg noodles or white rice. During the winter months mom would make a fresh pot of chicken soup just about every week, with carrots, onions, celery, matzo balls and sometimes even with kreplach (meat filled dumplings).
I learned to make chicken soup at mom’s elbow and that knowledge saw Jennifer, our two sons and me through many Southern California winters. Temperatures didn’t reach freezing. There was no snow on the ground. But that didn’t stop the common cold for making house calls.
Generations of Jewish families have believed chicken soup has medical benefits as strongly as if it said so in the Torah. And just as bagels broke the bounds of Jewish culture to become American food so too has chicken soup.
Then, a decade ago the San Diego edition of the magazine DiningOut reported Dr. Stephen Rennard of the Nebraska Medical Center “applied the scientific method to the ageless theory that chicken soup helps cure a cold. Rennard’s testing revealed that the soup indeed inhibited the white blood cells that cause inflammation’s ability to do so {i.e. it is good for colds}.”
Dr. Rennard reported: chicken soup has anti-inflammatory properties that could explain why it soothes sore throats and eases the misery of colds and flu. In a report published in the journal Chest, Dr. Rennard and his team wrote, “Chicken soup may contain a number of substances with beneficial medicinal activity.”
Dr. Rennard’s’ lab conducted tests on a batch of chicken soup made by his wife. He said he ran lab tests on the components of the soup and found all the ingredients in chicken soup were “inhibitory, including the boiled extract of chicken alone.”
My mother, both of my grandmothers, all my aunts and millions of others would have the same reaction: so what’s new?

My memoir Cooking for a Beautiful Woman includes my mother’s recipe for chicken soup and 12 other recipes for hearty soups and stews. You can learn more about the book and buy it at www.larrylevineauthor.com In the meantime, here’s mom’s chicken soup recipe.

Remove the large lumps of fat from the chicken. Cut the chicken into parts: legs, thighs, wings, breast halves, back. Put the chicken parts, feet, gizzards, necks, backs, onion, celery stalks and leaves, and parsnips in a 12-quart soup pot. Scrub three of the carrots and cut them into 1-inch chunks and add them to the pot. Add the bay leaves and salt. Add the water to the pot. Bring the water to a boil. Lower the heat to a slow boil for 2 hours.

With a slotted spoon, remove all the solids from the soup. Discard the bay leaves and all the vegetables. Save the chicken legs and thighs, gizzards, necks and backs on a plate. Strain the soup and return it to the pot.

Discard the skin of the necks and give yourself a treat: suck the juice from the ends and pick off and eat the meat. Then throw away the bones. (If you want to make a friend for life give your cat the breast and neck meat for a few meals.)

The next day, skim the fat from the top of the soup. Bring the soup to a boil. Peel the remaining three carrots, slice them into 1/4-inch rings, and put them into the soup. Strip the meat from the legs, thighs, and backs, and add it to the soup in small pieces, discarding the skin. Add the gizzards to the soup. Cook the soup at a slow boil for 30 minutes.

Taste the soup and add more salt if necessary.

Serve with a generous amount of egg noodles that have been prepared according to the package directions or with cooked white rice.

Note: Many people and most delis use the breast meat as well as the dark meat in the soup. I find the white meat too dry and lacking in taste, although the cat seems to disagree.

In addition to sucking the juice out of the necks, Mom loved to suck on the chicken feet before tossing them out.

This should give you about ten large bowls of soup when you add matzo balls.