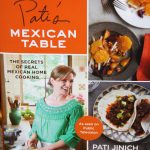 I first met Pati Jinich one Saturday afternoon early this year. She was on her weekly PBS TV show, Pati’s Mexican Table. I was in my living room.

Each week Pati visits villages and cities in Mexico to introduce us to the local cuisine and we spend time with her in her kitchen as she teaches us about cooking Mexican dishes. And each week, when the show is over, I say how I want to follow her around to see what she is seeing, meet the people she meets and eat what she eats. Recently, her travels have been to the Sinaloa region on the west coast of Mexico. Her vivacious personality almost cries out for us to call her Pati, not Ms. Jinich.

After one recent show I went online and found her recipe for Abodo Pork Shoulder (or butt). Then I went to the Barnes & Novel website and bought her book, which carries the same name as the TV show.

Pati has opened a whole new world of cooking for me. In all the thousands of meals I’ve cooked through the decades I never before used actual Mexican chiles, mostly because I didn’t know enough about the flavors or heat level of the various types. Pati solved that problem by spacing paragraphs about many of the chiles through her book.

The first thing I cooked was the aforementioned Adobo Pork Shoulder. I used guajillo and ancho chiles. It turned out beyond superb. I served it with diced fresh tomatoes, chunks of avocado and raw white onion. We swooned with every bite. I wrapped mine in flour tortillas. Jennifer had hers as a plate.

Next up came Pati’s spareribs. This time it was chipotle chiles in adobo sauce. These are ripened Jalapenos, smoked then reconstituted in the adobo. I’ve never had more flavorful, more tender, or juicer ribs anywhere and anywhere includes a lot to territory. It also was the 192nd consecutive home cooked meal I’ve prepared during the pandemic.

This is more than a cookbook. It’s also the second book I’ve reviewed for this online food magazine in the 10 years we’ve been publishing. The other was Jacques Pepin’s Heart and Soul in the Kitchen. Both books provide alluring recipes. They also offer insights into the lives of the chefs and discussions of different foods and techniques. They are books to read for enjoyment as well as cookbooks.

Pati Jinich is a former analyst who specialized in Latin American policy. Her career change was inspired by her husband, who observed her love of food and cooking. Now she is a self-described “overloaded soccer mom” of three sons and the official chef at the Mexican Cultural Institute in Washington D.C., where the family lives.

Pati’s Mexican Table is sub-titled The Secrets of Real Mexican Home Cooking. There are sections on salsas, salads, soups, vegetarian, seafood, poultry, meat, sides, desserts and drinks. And every recipe is aimed at accommodating the schedule of a busy home cook, using readily available ingredients, not overly spicey, and simple to prepare.

For someone who loves the flavors of Mexico but never understood how to achieve them beyond the most basic level, Pati’s Mexican Table is a revelation and a treasure.