Bubble & Squeak / You Don’t Have to be British, but it helps 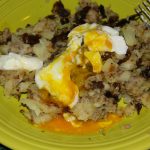 You don’t have to be British, or as in my case married a Brit, but it helps.

The English have a sometimes colorful, sometimes mystifying language when it comes to food. A full fry-up is breakfast; bangers are sausages; spotted dick is cake made with suet and dried fruit.

Then there’s bubble and squeak, the definition of which has nothing to do with what’s on the plate. One story says the name comes from the sound it makes while it’s frying. Another is that it’s the sound one’s stomach makes after eating it.

Whatever the roots of the name, it’s what I made for dinner tonight, the 153rd consecutive home cooked dinner I’ve done in defiance of the miserable pandemic that has me virtually locked down.

In these five months I’ve cooked lamb, beef, chicken, pork, liver, and fish. I’ve made soups, stews, pot roasts, spareribs, short ribs, lamb shanks, pork chops and eggs, and salads. We’ve eaten Mexican, Spanish, Basque, Jewish, French, Indian, Italian, Southwest, Russian, English, Romanian and good old American dinners. And we still are not bored. Many of the recipes are in my memoir Cooking for a Beautiful Woman (www.larrylevineauthor.com), which is a finalist for the Nancy Pearl Award for the best new memoir of the year sponsored by the Pacific Northwest Writers Assn.

Bubble and squeak is something the English do with leftovers. I had a half head of cabbage left over from the corned beef and cabbage dinner I made for number 150 three nights before. Jennifer grew up eating bubble and squeak and always speaks of it fondly. So it was a natural – let over cabbage and a desire to cook something new.

No such thing here. The half head of cabbage was uncooked. The two russet potatoes were in a bowl on the peninsula. We had no appropriate sausage. No problem. I would rise to the challenge. And Jennifer, a Brit who grew up eating bubble and squeak, proclaimed it excellent.

BUBBLE AND SQUEAK (serves two)
For the sausage
½ lb. ground pork
1 teaspoon ground sage
3/8 teaspoon salt
3/8 teaspoon ground black pepper
½ teaspoon red pepper flakes
1/8 teaspoon brown sugar
With your hands, mix all these ingredients together in a bowl. Refrigerate until 30 minutes before you are ready to fry it.

I did this in a 12-inch cast iron skillet and it came out fine.

INSTRUCTIONS
Sautee the onions in a lightly oiled pan for three minutes.
Set the onions aside in a bowl.

For the sausage
Heat the oil in the skillet over a medium-low light.
Add the sausage and break it up with a wooden spoon. Fry until lightly browned.
Set the sausage aside in a bowl.

For the main event
Cut the cabbage lengthwise into strips one-half inch wide. Then cut across the strips to halve them.
Bring a pot of water to a boil.
Add the cabbage, return it to a boil and boil for three minutes.
Empty the cabbage into a colander and drain thoroughly

Bake the two potatoes at 400 degrees for one hour.
Cut the potatoes in half lengthwise. Make cuts in the potatoes to allow them to cool.

Putting it together
Put the drained cabbage into a bowl.
Add the onions and sausage and mix well.

With a spoon, scrape the potatoes from the skins into a bowl one potato at a time.
Mash each potato with a hand ricer and add it to the cabbage mixture.
Mix well.

Melt the butter in the skillet but don’t let it brown.
Add the cabbage mixture to the skillet and fry over a medium-high light for about 20 minutes, stirring regularly. You want it to brown but not burn. Scrape the bottom of the pan as the potatoes start to stick. Don’t let it burn.

When the bubble and squeak is nicely browned, remove it from the heat.

Poach one or two eggs per person. Keep them runny. You want the yolks to run into the mixture when broken.

Plate the bubble and squeak and top it with the eggs.

I can tell you the bubble and squeak neither bubbled nor squeaked while frying nor did out stomachs bubble or squeak after eating it.