THE DILEMMA OF THE RESTAURANT WORKER AND THE CUSTOMER 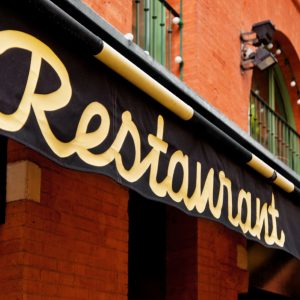 What would you do?

Suppose you were waiting tables in a nice restaurant. You’ve been out of work for weeks because of the coronavirus shutdown.

Now suppose the governor of your state – let’s call it Georgia – says it’s time to open up the economy. Your boss calls to tell you it’s time to come back to work. You get there and you find tables are six feet apart and separated by large potted plants so people can’t walk by close to the tables. No more than six people are allowed at a table. Menus are printed on paper and thrown away after each party orders. Plates and utensils are not on the table until the party is seated. Utensils then are delivered wrapped in a napkin. No one will be seated without a reservation. You will be wearing a mask and gloves as will everyone else on staff, including in the kitchen.

At the same time, you read the newspapers and watch TV. You know the medical community is virtually unanimous in the opinion that opening the economy is going too fast and that restaurants should not be opening. You know restaurants are opening in other states, but there doesn’t seem to be a cohesive policy. Even in your state, it’s every restaurant owner left to figure out what’s best. You aren’t the only one to consider in your decision. You either a) live with your spouse and young child, or b) live with your parents.

Another thing. None of the customers will be wearing masks. It’s a restaurant. They came to eat. Also, no gloves for the customers. And finally, summer’s coming. The air conditioning will be on.

What do you do? If you don’t go back to work you lose the job and you won’t get unemployment insurance. If you do go back to work, and you believe the doctors, you risk infection or carrying the disease to others.

This isn’t hypothetical. It’s drawn from a story I saw on MSNBC about a reopened restaurant in Atlanta Georgia. The place was full at reduced capacity. The manager explained they are not in profit-mode, they are in sustainability-mode.

Fifteen minutes before, on CNN I saw a panel discussion in which three doctors each said reopening is moving too fast, without the checkpoints needed to justify reopening or monitor the results after reopening. Each doctor also said restaurants should not be opening.

Now, another question. Would you be a customer in the restaurant described above, or any other restaurant under current circumstances?

I haven’t eaten in a restaurant since Sunday, March 15, when Jennifer and I had breakfast at Art’s Deli in Studio City CA with our son, Lloyd, his wife, Edie, and our two grand daughters. The next day the shelter-in-place directive was announced and non-essential businesses, including restaurants, closed.

That could be tough duty for the editor and publisher of this online food magazine and a restaurant recommendation website. Restaurants are a vital part of my social life. Yet, I’m not itching to go back. In my personal view, the risks outweigh the reward.

I think of our many favorite eateries and the people who work there. They are not just waiters, waitresses, chefs, busboys and receptionists. They are our friends. And the experience of enjoying good wine and food in a restaurant is an important part of our lives. But apparently not important enough to venture out among people who may not be as diligent as we believe ourselves to be or who may have been exposed despite their diligence.

Someone asked recently which restaurant I would go to first if they all were to reopen tomorrow. I couldn’t answer because the question implies an optimism I don’t feel about the drive for reopening, not just restaurants but the economy in general. My view is that politicians are being reckless in their rush to a false normalcy. If a politician thinks tattoo parlors are essential, why would I trust that person to make a decision about restaurants? While I consider myself a devoted optimist, my personal preference in this instance is to side with the doctors and the science.

When the time comes, when restaurants are opened and I feel safe in attending, then I’ll decide which one comes first.

(A final note. In a poll of 8,000 people nationally conducted in late April and early may for the Washington Post, 60 percent of people working outside their home said they were worried they could be exposed to the virus at work and carry it home to their household.)