COOK ONCE, EAT TWICE / handy hints for home cooks, with a recipe for a great Russian Cabbage Soup 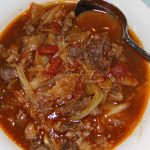 That’s one of the secrets to how Jennifer and I have eaten home-cooked dinners 66 consecutive nights without getting bored.

The last time we ate in a restaurant was March 15, when we had breakfast at Art’s Deli in Studio City CA with our son Lloyd, his wife Edie and our two grand daughters, age 9 and 6. After a large and late breakfast, neither Jennifer nor I felt like much of a dinner, so it was cheese and crackers and fresh fruit at home. The next night, March 16, I grilled Italian sausages, which we ate along with baked beans, grilled onions, sauerkraut and red peppers. Sixty-six days later, we still have not done take-out.

When I say “home-cooked dinners,” I mean from scratch. Not frozen dinners in the microwave or oven.

It’s this last item that’s the subject of this feature. Last week I made a large pot of split pea soup using the recipe from the original Joy of Cooking. It was enough to provide two large bowls of soup for each of us for three nights. We interspersed other things so we didn’t have the soup on consecutive night. Two days ago, I made a large pot of the cabbage soup from my own recipe. We had it for dinner that night, delicious soup with mounds of cabbage and heaps of flanken beef. We have enough for two more dinners. One will come tomorrow night after tonight’s pot roast. And the pot roast will provide enough for a second dinner.

That’s how we’ve come this far. Chicken fricassee, lamb chops, short ribs, pollo ala crème, poached salmon, sole almandine, sword fish, skirt steak, tomato salads, egg plant salad, scampi, marmalade chicken, oven barbequed spare ribs, all of these and others have fed us most of the time, with pot roasts, beef stew, and soups serving multiple-night meals. Most of these recipes are in my book Cooking for a Beautiful Woman / the tastes and tales of a wonderful life. (www.larrylevineauthor.com)

It helps if you start out as a willing home-cook. If not, I urge you to be positive in the face of the coronavirus. Cooking isn’t that hard if you have a recipe and a sense of fun. What’s the worst that can happen? You ruin something and throw it out. That isn’t likely as long as you pay attention. So, put some nice music on the stereo, pour a glass of wine if you like, and relax. Here’s the recipe for the sweet and sour Russian cabbage soup from Cooking for a Beautiful Woman. It recalls the Russian heritage of my father’s side of the family. This is easy for an experienced cook and a good place to start for someone with less experience because it’s almost impossible to mess it up.

In an 8-quart stockpot or larger, combine the tomatoes and water and bring them to a boil. Rinse the flanken and soup bones and rub off any bone chips or slivers. Cut the flanken into pieces of two or three ribs each. Add the flanken, soup bones and all the other ingredients to the pot. Stir to mix. Bring to a boil. Reduce the heat and simmer covered, for 2 ½ hours.

Remove the flanken and soup bones. (If you used marrow bones, scoop out the marrow and enjoy.) Discard the soup bones. When cool enough to handle, strip the meat from the flanken bones, tear the meat into small pieces and return it to the soup. Let the soup cool and skim off the fat. If you have the time, put the soup in the refrigerator overnight so the fat will congeal and be easier to remove.

If you have refrigerated the soup and the fat is congealed, use a spatula or slotted spoon to remove the layer of fat. You will wind up with some of the meat and cabbage sticking to the fat. Put the removed fat into a strainer. Run it under hot water to strain out the fat, then return the cabbage and meat to the soup pot.

Bring the soup to a boil, and serve.

Serve with a small green salad and/or pumpernickel bread.

One heaping bowl often is enough for an entrée for one.

(NOTE: Count the number of ribs that you put into the pot. The meat will cook off many of the bones and you won’t want to leave any in the soup when you serve it.)

If you are alone at home and cooking for one, think of cutting this recipe in half or freezing portions.