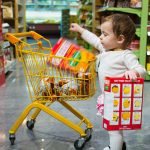 Grocery shopping today is not a question of “what do I need.” It’s as much a matter of “what do they have.”

This was driven home to me this morning when I needed to shop at two different supermarkets to find almost everything on my shopping list because my standby market has come up short on several items the last two weeks. The two markets are located less than a mile apart in what has to be called an upscale neighborhood. Yet the feel of the market behavior of the shoppers in the two markets was so markedly different. It left me with a question: does the market define who shops there, or do the shoppers define the market.

I’m not going to name the markets because it isn’t my purpose to shame either one. Rather, I want to share the differing experiences as a sign of the inconsistencies in one part of everyday life under the cloud of a pandemic.

MARKET #1 – This market has the reputation of being the more expensive of the two. It’s the market at which I do 90 percent or more of my grocery shopping, not because it’s more expensive but because I find the merchandise of higher quality. Until yesterday, it was the only market at which I’ve shopped in the last three weeks. (I went to an English shop yesterday because Market #1 hadn’t had Heinz vegetarian beans for two weeks and that’s something we love with our grilled sausage dinners.)

Market #1 has had a seniors only policy from 7 to 8 a.m. every day for two weeks and that’s when I’ve done my shopping. At first, there were long lines to enter the store. Today and when I was there four days ago, there were no lines. Last time, the security guard told me there were only 15 people in the store when I got there at 7:05.

I arrived today at about 7:03 and went right into the store. A new policy says customers can no longer bring their reusable shopping bags. The market provides very strong, reusable plastic bags. But they are intended for reuse after this crisis is over. In the meantime, they will give you new bags every time you shop. No using the bags more than once unless you want to take your groceries into the parking lot and bag them yourself.

By anecdotal observation, it seemed most of the shoppers were wearing masks. I wasn’t because of the CDC advice that it doesn’t protect you, it only prevents you from spreading the virus if you have it. I’ve been thinking about that last part and I’m going to start wearing a mask anytime I might be around people. Shoppers at Market #1 have been mindful of keeping distances. It’s particularly noticeable in the produce department, where people are not crowding around the displays. I wanted an avocado and was searching for one that wasn’t quite as hard as a baseball. A woman walked up and stopped at the other side of the display. A man stood a distance away, waiting for one of us to finish before he stepped up. It’s the same throughout the store – the nearly empty dairy shelves, the meat department, the fish counter, the deli.

The aisles at Market #1 are fairly roomy, so maintaining separation is not difficult and never once have I felt my space was being compromised.

I was in the store about 25 minutes and had harvested everything on my shopping list. But there were several things the store didn’t have, things that were becoming an issue for us. So, off I went.

MARKET #2 – Access to the store was easy. No lines. I drove by a week ago and there were lines into the parking lot and they were allowing only a certain number of people in at a time. The store website lists an opening time of 6 a.m. but does not show any dedicated senior citizen hours. I headed straight for the dairy section. We were down to our last container of soy milk, which I use for the oatmeal or Weetabix we have for breakfast. Market #1 hadn’t had soy milk for two weeks and I have been known to have lactose issues. At Market #2, I scored three half-gallon containers. We are down to the last of our imported French butter and Market #1 had no butter at all for nearly two weeks. At market #2, I found unsalted butter. Not the imported stuff we like or even whipped. But we now have a pound of butter.

The main purpose for this stop at Market #2 was pure cranberry juice that Jennifer needs. They don’t carry it at Market #1, even in ordinary times. With Jennifer’s directions to guide me, I walked right up to the shelf where it sat.

Toilet paper. They had toilet paper at Market #2, something I haven’t seen at Market #1 for two weeks. Limit one six-pack per person. And I was able to score a package of split peas for the pea soup I’ve been wanting to make.

That’s the good part of the stop at Market #2. But the aisles were narrower and more crowded because there were more people in the store. Market #2 has a reputation of being less expensive than Market #1, which probably explains the larger crowd. Again, it’s only anecdotal observation, but it seemed that very few of the shoppers at Market #2 were wearing masks.

Both markets have installed plastic barriers to separate customers from check-out clerks at the cash register. But the barriers don’t extend to where the groceries go to be bagged after they are checked.

In the more crowded confines of Market #2 I became keenly aware that the math indicates things are going to get riskier in the days ahead. As the number of cases increases, so will the numbers of people who have been exposed and thus can expose others.

I was not comfortable at Market #2 and told Jennifer I would prefer not to go back unless it was for something essential, like her cranberry juice. As for the dairy products, I’ll have to continue to hope for the best at Market #1 and seek them out at Market #2 only if pushed to the limit. Either that, or I’ll have to find a substitute for Market #2.