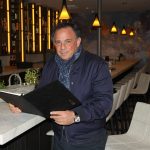 Five hours before the opening of Josiah Citrin’s newly re-christened restaurant, Citrin, in the Santa Monica CA space in which he previously operated the Michelin-starred Melisse, we sat down for a scheduled half hour interview about the journey of the previous nine months.

But not for long. Josiah was like a barefoot kid on beach sand on an August afternoon. I sat opposite him in the newly decorated space and it couldn’t have been much more than 30 seconds before he was on the move, tending to some detail.

That’s the way the interview went. He was like an expectant father and delivery was coming quickly. I followed him around Citrin and the adjacent new space to which he had re-assigned the name Melisse. If I was going to ask any questions, they probably would be addressed to his back as he flitted in one door and out another, in one direction and then another.

I didn’t really need much from Josiah this day, just an update on the interview I did last February, right before he ended the near 20-year run of the original Melisse. I was there more to see the renovated facility. And I needed a photo. To get Josiah Citrin to hold still for a photo, or to even agree to a location or pose is like telling a raw egg not to slide down a wall. Finally, I stuck a menu in his hand – actually a wine list – stood him next to the beautiful new 20-seat white marble-topped bar at Citrin, waited for him to tuck his scarf inside his jacket, and I fired off a few quick shots before he was itching to go again. Before we shot the photos, he asked if I would rather have him in his chef’s coat. I declined, figuring that would just give him more room and more time to escape.

I met Josiah in August 1999, soon after his father-in-law told me about the new restaurant called Melisse while we were playing as partners in a golf tournament. Within minutes of entering the space two weeks later, Jennifer and I were enchanted. The restaurant crooned of an elegance to rival such L.A. stars as Perino’s, The Windsor Room and other great restaurants of a gone-by era. And the food was inventive and extraordinary. We became regulars, visiting on our own and with friends and out-of-town guests. Eventually, we found our favorite table against the wall on the Wilshire Boulevard side of the room. We saw Josiah redecorate the room and evolve the menu through time, always true to the class and sophistication we loved. And we glowed when he was awarded two Michelin Stars

Then, early in 2019, I learned “Melisse was closing.” Horrors. Fear. Panic. This was one of my two favorite restaurants in the state. With our cousins Barry and Beverly visiting from Toronto, we made a reservation for one last meal. At our table that night, Josiah told us he was closing for a total remodel of the space and would re-open later in the year with a new look, new concept and a new menu.

“I want to do an article on the life cycle of a restaurant,” I told him. He said he loved the idea and we met a two weeks later in the space that soon would pass into history.

Restaurants do have life cycles. Unfortunately, too many chefs and owners don’t realize that. They stay on too long and watch their star fade. Josiah got ahead of the game.

For Josiah Citrin, Melisse represented the fulfillment of a dream. “I had been thinking of this my whole life.”

“This” was a fine-dining French restaurant with a passionate staff that opened on Bastille Day, 1999 and quickly took its place among the top rated restaurants in a city replete with great restaurants.

Josiah found the location on Wilshire Boulevard and signed the lease in October 1998 while still working at one of the city’s other acclaimed restaurants. Nine months later the doors opened at Melisse.

Josiah describes the original Melisse menu as vegetable driven with protein added, heavily influenced by his French training. The menu was a combination of ala carte and prix fixe, with all items available for crossover. By 2010 the ala carte orders were down to 20 percent and “portioning and service became an issue.” That’s when the ala carte menu was eliminated and replaced with 10-course and 4/5-course prix fixe menus. A 15-course carte blanch menu was added soon after. Michelin awarded Josiah his first star in 2008.

The notion of change entered Josiah’s thinking in 2016. Lease renewal became an issue, Josiah told me last February. The surrounding neighborhood was changing, he felt the restaurant was aging, and the building needed work. “Every restaurant has a life cycle,” he said.

After mulling over ideas for redoing the restaurant and what he might keep and what might change, Josiah found the path he preferred. He would shut down, modernize the main room, add a separate room for chef’s table dining, and install a new bar. The main room menu would become completely ala carte, but he would keep some of the signature dishes. “If I eliminate the caviar egg my customers would kill me,” he said.

I looked around the room as it was entering its last weeks and felt the nostalgia of the many nights and celebrations. When it opened in 1999, I could go there dressed in coat and tie and know every other man in the room would be dressed similarly. In recent years, I would be the only man, other than the staff, wearing a tie. That about summarizes what inspired Josiah’s recognition of the need for change.

“It needs to evolve,” he said.

Well, it did evolve. The old site consisted of a main room and a smaller space for private events. The whole place was called Melisse. Now, the old main room has been renamed Citrin. The step-up booths around the perimeter still are there but the entire place is more informal. Still quietly elegant. Just less formal. And the menu is completely ala carte.

The old private dining space has been given the Melisse name. Reservations for parties of two or four in the open kitchen restaurant are by advanced ticket purchase with seating limited to 14 people. The menu is fixed with five canapes and nine tasting courses. It’s a two and one-half hour experience.

I asked Josiah a year ago if the new place would be fine dining. His answer: “I don’t know what fine dining is. I just want great food, great service, a great atmosphere, and a great wine list.”

When I stepped into the remodeled space hours before opening, I could feel my eyes open wide. The stunning new 20-seat bar is the first thing you’ll see when you enter Citrin and it took my breath away. From the to the artwork on the walls and the signature chandelier, Melisse and Citrin are ready for their new life cycle.

(Photo is Josiah Citrin at the new bar at his restaurant, Citrin)