A BAGEL, A BOWL OF CHILI AND A CULTURAL APPROPRIATION DEBATE 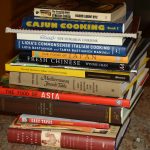 In reading the Post piece, I realized how much I don’t like the words “cultural appropriation.” To me they seem accusatory, separatist, isolationist, and a prime example of political correctness run amok. In short, I find them offensive, particularly when used in relation to food.

You see, I love food. Almost all food from almost all cultures. I love the symphony of flavors found at the vast array of ethnic restaurants that dot the national map. I love the music of the varied languages native to those who own-manage-work in those restaurants. I love the creative cross-cultural flare of a Latino chef behind a Jewish deli counter, the innovation of a Chinese chef in a French restaurant. A guy named Bayless, who pours himself into the culture of Mexico in search of inspiration for his restaurants in Illinois, Pennsylvania, Florida, and California.

I’m amused, not offended when a friend appropriates my culture into hers and orders a bagel with a bowl of chili at a Jewish deli. My Russian-Romanian-Jewish-New York cultures have been appropriated around the globe and I love it. Cheese blintzes at a café in Issaquah WA. Lox and bagels at a hotel brunch in Edinburgh. The biggest retail outlet for Western Bagels is Vallarta, a Mexican grocery chain. We have turkey for Thanksgiving dinner, then use the leftovers for enchiladas the next night and gumbo the night after. Are we appropriating anything?

After all, isn’t imitation still the sincerest form of flattery?

Sure. I love the purity of kimchi prepared by the hands of a Korean in a Korean restaurant, or grilled octopus in a Greek restaurant prepared by a Greek-born chef-owner. But aren’t those kitchens just as likely to be staffed by someone of Latin extraction? And don’t those Latino cooks and Korean restaurant owners figure out how to speak with each other. And when those cooks move on from their current employment, might they not carry with them flourishes to mesh with their own cultural heritages?

In my own cooking, I enjoy the freedom to substitute herbs and spices from one culinary culture to another. I may find my own combinations of flavors for that pot of soup, drag stuff from the pantry and fridge in unlikely combinations for omelets. There are 88 linear inches of spice rack in my pantry crammed to overflowing with a multitude of ethnic flavorings. And it all comes from an amalgamation of things I have eaten in restaurants or at the homes of friends or culled from my collection of recipes and cookbooks.

When I alter a recipe to fit the tastes or dietary constraints of our household, am I appropriating someone’s culture or am I appreciating their history and fitting it into our own lives? When a mixed marriage brings diverse foods to a home, is that appropriation or enrichment?

I never bought into the notion of America as a melting pot. It’s always struck me as more of a mosaic, with neighborhoods of a particular ethnicity living side-by-side with neighborhoods of other ethnicities until individuals begin to break out and assimilate. When they do, the one thing they are most likely to take with them is their food history. That’s why we find sushi restaurants scattered across the landscape, often hundreds of miles form any ocean. It’s why we hunt for “authentic” Italian food in the middle of Nebraska. It’s why some are willing to accept P.F. Chiang as Chinese food and Olive Garden as Italian. Because we crave these cross-cultural experiences, even when they are less than stellar or authentic.

I understand the pejorative use of “cultural appropriation” as it comes from those who fear losing their history. I just don’t agree with it. Share your heritage with the rest of us and enjoy a bit of ours. Hang onto you heritage as you blend parts of it with others to form new cultures. There are plenty of cultural and ethnic divisions in the United States without us having to fight over what we enjoy eating.

At it’s politically correct extreme, cultural appropriation of food is an accusation of “taking or using things from a culture that is not your own, especially without showing you understand or respect this culture,” according to the Cambridge Dictionary. Often, the complaint of appropriation reaches to profiteering from naming a restaurant for a culture and offering food from that culture when you are not of that culture. So, maybe there is some truth in it all, some justification when pointing to a corporate-owned chain of ethnic restaurants with no one, or virtually no one in charge having any ties to the actual ethnicity. The notion is that money is being diverted from other restaurant run by people of the actual culture.

But wait. When we flock to Irish pubs on St. Patrick’s Day do we check to make sure the owner is from Ireland, or even Irish? Aren’t reservations hard to come by at even marginal Mexican restaurants on Cinco de Mayo and don’t hardly adequate tamales fly off the shelf at Christmas? Weren’t Nehru jackets hot sellers in America in the 1970s? Many who wore them were the same age then as those most apt to chant “cultural appropriation” today.

As for those who were so offended by the offerings of ethnic styled food at the Oberlin College cafeteria, ease up. No one claimed it was authentic Thai, or Cuban, or Chinese, or soul food. It was just a nod to diversity. Would you rather have been offered meatloaf or mac and cheese at every meal?

My collection of cookbooks includes Chinese, Indian, Japanese, Mexican, Italian, Middle Eastern, New England, southwestern, Cajun, Jewish, French, and others. My book, Cooking for a Beautiful Woman, includes recipes from some 20 ethnic and cultural backgrounds. Are the 104 recipes in the book “authentic?” Some yes, particularly those handed down from my Russian and Romanian ancestors. Others not so much. I have neither the equipment nor the access to the ingredients to prepare dishes the way they are done in their native countries. Have I appropriated anything when I make Irish stew or chicken teriyaki? Or have I honored the diversity that has come to me through the decades of exposure to the tastes of a myriad of cultures and the people who brought them into my life. An American friend once marveled at the fact that I had prepared a curry dinner for our British relatives during a visit to England. How many layers of appropriation can we find in that one meal it that’s our purpose?

The ethnicity of a chef often has little to do with the quality of the cooking. I recently ate matzo ball soup and a pastrami sandwich at a Sacramento CA deli owned by a Jewish woman. It was dreadful. There are Mexican restaurants with terrible food prepared by Mexican cooks. But who would deny Roy Choi the freedom to offer his Korean-Mexican tacos?

In the last several weeks, I have prepared an off-the-charts shrimp gumbo with a world-class roux, a steak ranchero to write home about, and a chicken fricassee that brought moans of delight. None of these have anything to do with my ethnic or cultural background. But have I culturally appropriated anything? I eat award-winning sushi one night and first-class Argentinian food a few nights later in the same strip mall. Then, a few miles west on the same street, I eat Italian and not too much further along there’s a favorite French restaurant. I celebrate that we can do that. Honor it. If you want to call any of it appropriation, that’s your problem.

When I go to a local coffee shop, where the entire staff is Latino, and I order pork chops and eggs with grits for breakfast, has anyone appropriated anything?

So, let’s all relax. Remember, we all came here from someplace else and brought with us the elements that make up our wonderful national mosaic. I’ll share my bagel with you; you share your chili with me. And you folks in the school cafeteria, instead of railing against the appropriation of your culture, how about inviting a friend home for an “authentic” dinner?