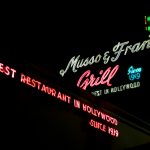 It’s in the middle of a block in the heart of Hollywood California. Thousands of people walk by every day. Mostly they are tourists. They are looking down at the names of the celebrities on the stars on the Hollywood Walk of Fame. Some are reciting the names out loud as they shuffle by. Occasionally they will stop to take a photo of one of the stars embedded in the pavement.

Without noticing, they walk by the front door of 100-year-old Musso and Frank Grill, the oldest restaurant in Hollywood and one of the oldest in all of Los Angeles.

If those tourists walked through that front door on Hollywood Boulevard, they would be stepping into the rich history of Hollywood. To the left is the famous table where Charlie Chaplin always dined. High on the wall in the big room is a mural, discolored by the smoke from Humphrey Bogart’s cigarettes as it wafted up from the table he favored. Even today, you can spot Hollywood stars and deal makers dining undisturbed at one of the booths.

Those tourists also would be treated to some very good food. But Musso and Frank Grill is not a tourist spot. The tourists pass by in flip-flops, shorts and t-shirts. They will stop at a fast food place or taco shop on the boulevard for lunch. The menu and prices at Musso and Frank are seldom for them. Inside, those who are visiting for lunch or dinner, are more likely to be wearing collared shirts, pant suits or dresses, and they are more likely to have entered by the rear door, off the parking lot. They are locals, who have been dining here for decades, or the children and grandchildren of those people. This may be a slice of old Hollywood, but even the younger diners seem to understand there is something special going on in this venerable place.

Musso and Frank Grill will celebrate its birthday with a full week of special events in late September.

That the restaurant is still here is a testament to the efforts of executive chef J.P. Amateau and chief operating office Mark Echeverria. They form the team that took over operation of the landmark some 10 years ago, when it was on shaky ground and might well have closed.

In anticipation of the centennial celebration, I met with Amateau and Echeverria to update a feature we published on the pair and their plans to revive the restaurant eight years ago. https://www.tabletalkatlarrys.com/2011/05/musso-and-frank-grill-where-history-meets-the-future-in-hollwyood/)

Before Echeverria could tell me customer traffic had increased some 300% in the 10 years, I saw the difference. Ten years ago, I had lunch at Musso and Frank with a friend. You could have shot a cannon through place and not hit anyone. This time, the tables were busy in both rooms.

I arrived 90-minutes early for our interview and spent some time at the counter, where I ordered a burger and watched the restaurant’s signature Flannel Cakes fly off the griddle. “Sweeter than a pancake and not as light as a crepe,” is how they are described on the menu. They come three to and order, rolled like a crepe, with syrup, or filled with yogurt, bananas and strawberries, or with whipped cream and strawberries. A ladle of batter, a few twists of the wrist, a flip with a spatula and in less than a minute there’s the golden-brown flannel cake.

I asked Amateau how tastes have changed in the eight years since he took control of the kitchen. “Gluten wasn’t as much of an issue back then and people seem to have become more concerned about food allergies,” he said. As for veganism, he said it’s only an occasional issue and “we usually prepare a grilled vegetable plate.”

Amateau said the only major cut in the menu has been the pork loin, which was a non-seller. He tried to change the tomato soup. He thought the old version was too rich. But the change “didn’t fly” and customers “let us know they wanted the old soup back. I wanted to take a few other items off the menu, but customers balked,” Amateau said.

Steak remains the number one seller at Musso and Frank. Steaks and chops are prepared over a flame broiler that’s been in service for decades. I once asked a grill chef how many steaks and chops had come off that grill and he answered, “Probably a million.” He may not have been exaggerating. Echeverria later said steaks account for 32% of the restaurant’s meals, up from 25% eight years earlier.

Amateau was first brought in as a restaurant consultant. He spent weeks observing kitchen operations. When he started making recommendations, Echeverria realized how important Amateau could be in the revival and survival of Musso and Frank. He offered him the position of executive chef and still marvels at how fortunate that decision was.

Amateau loves to talk about the changes he has brought to the operation of the kitchen almost as much as he loves talking about the food. When he first arrived on the scene, there were no written-down recipes for any of the items on the menu. How the meal was prepared depended on which chef was doing the preparation. There was no concept of knowing how much it cost to put a meal on a plate, so the restaurant was losing money on many of the dishes served to patrons. There was no inventory control or logic to purchasing. Amateau changed all that and says, “The staff bought in quickly and completely. That’s why it worked.” Then he boasts of all the contemporary machinery that took the place of older, less efficient machines in the kitchen.

The front of the house is daily and nightly testament to the success of Amateau’s work in the kitchen, and Echeverria passionate commitment to protect the historic ambiance of the dining rooms and bar.

To step into Musso and Frank’s Grill is truly to step into Hollywood history. Echeverria says he has no plans to have the Bogart-stained mural cleaned. “Why would I?” he asked. “It’s part of what this place represents.”

And there lies what Echeverria describes as the biggest surprise or revelation he found after he took over leadership of the restaurant. His family had been involved in ownership and management of Musso and Frank for three generations before he arrived on the scene. “But I wasn’t aware of how much this restaurant meant to people, to the customers and the staff.”

Musso and Frank is legendary for the length of time many employees stay with the restaurant. There has been a spate of retirements in the last couple of years and the current longest-termer is Juan Ramos, who is in his 70s and has been serving customers for 48 years. That’s what he means by important, Echeverria said. People come to work at Musso and Frank and stay not just for the job but because they become part of the family.

The anniversary celebration will kick off Monday, Sept. 23 with the launch of a book telling the history of Musso and Frank Grill in words and pictures. Renowned L.A. mystery writer Michael Connelly, a Musso and Frank regular, will be on hand to do a reading from the book. The restaurant is closed on Monday’s, so that evening the staff will meet at the old Charlie Chaplin Studio for a party.

Tuesday, Wednesday, and Thursday (Sept. 24, 25, 26) the restaurant will be open for regular customers by invitation with prices rolled back to the 1919 level. Echeverria is working on a throw-back menu for these nights.

The actual 10th anniversary will be Friday, Sept. 27. There will be a presentation of a Hollywood Boulevard Award of Excellence in the afternoon and a special star will be placed outside the front door to mark 100 years on The Boulevard. That evening will feature an entertainment industry private party.

The celebration will wrap up Saturday, Sept. 28. Prices once again will be rolled back to 1919 and the public will be admitted. Reservations will be required, as will a contribution to an as yet unnamed charity.

L.A.is a town where historical preservation often means fighting to save the original golden arches. Musso and Frank Grill has weathered the ups and downs of uncountable economic cycles and food trends, seen the once-glamourous Boulevard fall into disrepair around it, and come through it all as proud as ever. This celebration is well-deserved.