A FRUITLESS QUEST FOR A TASTY BERRY 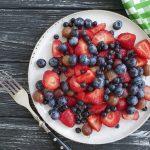 It’s that time of year when markets brim with flats of bright red strawberries and tempt us with the sight and intoxicating aroma of sweetness. I expect to be able to resist that temptation once again this year.

It isn’t that I don’t like strawberries. My history with berries goes back some 75 years to my boyhood and a love affair with berries as they used to be.

One of the fondest memories of my childhood in Brooklyn is the summer vacations in the Catskill Mountains, when my cousins and I would pick wild berries. We would go down by the river with our buckets, wash the berries in the flowing water, sit in the sunshine and eat blueberries, blackberries, raspberries, and strawberries.

Now, whole summers go by and the only berries I buy are blueberries to go in my oatmeal. I rate them as mediocre. They work for me in the cereal. Jennifer eats them by the bowl full but that’s not for me. The difference: frame of reference. I grew up foraging the wild berry vines of the Catskills and in a neighborhood where fresh berries were plentiful. Jennifer never had that opportunity.

If we judge by the shopping carts at our local Costco, Jennifer has plenty of company. In the chill room at the back of the store, there are stacks of cartons of various kinds of berries. By far the largest stack is the strawberries and they are wheeled out in a constant flow of anxious shoppers.

Jennifer brought home half a flat of strawberries from a farmers’ market last week and said, “These look and smell so good,” after I reminded her of our berry experiences of the last several years and why I don’t buy berries at the market or during my Sunday morning visits to the local farmers’ market.

Sure enough, on the second day I was throwing away fuzzy strawberries and cutting away soft squishy parts as I washed a bowl full for her lunch. And when she was eating them, she said, “They have no taste.” Yesterday she acknowledged she is chasing the memory of a time when berries were not this way.

Our home is a 45-minute drive from the strawberry fields of Ventura County in Southern California. California produces about 80 percent of the nation’s strawberries and Ventura County has the highest per-acre crop yield in the state. We stopped at a farm stand at one of those sites about 20 years ago. We were offered a taste of a berry that was unlike any we tasted before or since. The farmer told us they were Sequoia berries, a rare treat that has a very short shelf-life and cannot be sold in any supermarkets, so the they are not grown commercially. We bought a flat, which Jennifer, our two sons and I devoured in something like 24 hours. They were that good and there was no way we were going to risk having them go bad.

When we went back a few weeks later, the Sequoia season had ended. We learned the plants bear fruit only in June, another impediment to commercialization. Visits to the same farm in subsequent years were fruitless. (Hah.)

That was the last time I enjoyed a strawberry. Even the ones I taste at the farmers’ market, despite their beauty and fragrance, lack the sweetness of a truly great berry. They leave a medicinal taste in my mouth and begin to go bad within 24 hours.

All this is the result of the popularity of strawberries and the power of supermarkets to dictate requirements to growers. They want big, plump, red berries to seduce the customer, so growers and researchers found ways to meet those demands. High yield became the first commandment, accompanied by good shipping qualities, the ability to survive being banged around in packaging and shipping. The distance from farm to market added the need for longer shelf-life so the fruit wouldn’t go bad after days in shipping and hours in the market. The need for plumpness meant more water content in the fruit, which is one of the leading reasons for the loss of sweetness.

One might think the shorter distance from farm to consumer at a farmers’ market, or a visit to a ‘pick your own’ farm would resolve the issue. It does, but only slightly. High quality berries, like the Sequoias, are low-profit crops to begin with and the short shelf-life carries the risk of produce-gone-bad before it reaches the market. So, the farmers’ market vendors and the ‘pick-your-own’ fields are growing mostly the same variety of engineered strawberry you find in the supermarket. You might get it a bit fresher, which would mean they won’t go bad until the third day, but in the flavor department they have the same deficit.

If you have the craving, the space, and the time, your solution lies in growing your own and picking them as you need them. Look for Sequoia or Mara des Bois plants. The genetic engineers left these alone. If you can’t find these, have a conversation with the staff at your garden shop.

Cornell University horticulture professor Marvin Pritts told NPR a few years ago of an experiment in which strawberry plants from each decade of the last 100 years were planted at the same time in the same field. He said the research showed the size, yield and firmness increased through the years, but the sugar content and flavor decreased.

Pritts went on to say things would change if supermarkets would let customers taste berries or cut them in half instead of being lured by the look of the berry. A flavorful strawberry would be red through-and-through but the ones we get in most markets are red on the outside and often white on the inside.

Eye appeal drives the strawberry market and for most customers there is no framework within which to remember the days when strawberries actually had flavor.

Strawberries are not the only victims of their own success. Have you tried a blackberry or raspberry from a supermarket any time in the last 20 years? As production has risen to meet demand, tradeoffs have been made and the loser almost always is flavor.

About 15 years ago, Jennifer and I were motoring south through Oregon. She became tired of driving and pulled off the highway so I could take over. As I got out of the car, I was face-to-face with a huge vine loaded with luscious looking ripe blackberries growing wild along the roadside. I picked one and ate it. I picked another and gave it to Jennifer. I was young again, back in the Catskills of my boyhood. I haven’t bought a blackberry in the market since.

Same for what looks like and passes for a raspberry but turns out to be a tasteless collection of seeds.

As for blueberries, I buy them during the spring and summer if they are grown in the U.S. or Canada. The rest of the year, when they are imported from Mexico or Central or South America, I have bananas in my cereal. To my taste, those blueberries have a metallic after flavor.

In a little more than a month, Jennifer and I will be driving through upstate New York. If time permits, maybe we’ll see if we can make a stop in the Catskills and try our luck. If that doesn’t work, there’s always Maine, where we will be in July. I know a place outside of Kennebunkport – Nunan’s Lobster Hut – where I can get a lobster right from the ocean followed by a slice of Maine wild blueberry pie. All is not lost if you know where to look.