DOES ANYONE GO TO HAWAII FOR THE FOOD? 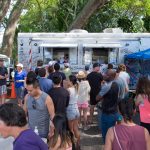 The voice came from behind me as we waited to board our flight to Maui at L.A. International Airport: “You go to Hawaii for a lot of things, but food isn’t one of them,” it said.

By the time I turned to see who said it, I was too late. I didn’t hear the voice again and had no idea who spoke those words.

Jennifer and I have been to Hawaii many times in the last 20 years, usually to Kapalua on the island of Maui. We’ve also been to Kauai and The Big Island of Hawaii. We go for the golf for me, the spas for Jennifer and the whale watching for both of us. We’ve had some very relaxing and wonderful visits. But I can’t say the food ever was the reason for booking the flight.

After a while, I realized the voice in the airport could have been saying either of two things: a) there is no good food in Hawaii, or b) with so many other things to do, food isn’t the main draw.

From our many trips to the islands, I could have accepted either alternative. We’ve ridden horses through lush forests, driven to the top of volcanoes, watched plenty of whales, visited sites where the musical South Pacific was filmed, seen indescribable rainbows, explored the Hana highway, and marveled at the beauty of countless waterfalls. When it comes to food, however, we’ve identified just a few restaurants we enjoy enough to visit again, and many not so much.

Merriman’s in Napili on Maui is the clear winner among all the restaurants we’ve tried over the years. It’s so good that we made reservations well ahead of time for two dinners on our most recent trip. It’s a rare place that does justice to meat dishes as well as fish on the same menu, and the fish offerings are not the boring standard items you will find dozens of other restaurants. Anytime I see Colorado lamb on a menu, I know the restaurant is a probable winner. That’s what Jennifer had on our first night this year, saddle of Colorado lamb. I’ve eaten kanpachi at sushi bars countless times, but this was the first time I’ve seen it offered cooked. It came from local waters. Both dishes were excellent

We’ve been to Merriman’s several times and never yet have we seen a man wearing a baseball cap, torn jeans, or flipflops. Most of the women wear dresses, many with a hint of Hawaii in the patterns. Most of the men wear collared shirts.

For breakfast on Maui we like Longhi’s in Lahaina. We go early, before Front Street fills with traffic and pedestrians, before the cruise ships arrive. The large shudders at the front of the restaurant are open to the scent of the ocean. The eggs are fresh, the bacon full of flavor, the Italian sausages are tops, and the orange juice is squeezed fresh. Then there is the French toast, thick slices of bread, well slathered in eggs, fried perfectly and served with very good maple syrup. With a side of bacon, it makes me swoon.

If you’re looking for something a bit up scale for dinner, there’s the Lahaina Grill on the ground floor of the historic Lahaina Inn. We dined there a few years ago, enjoyed it, but had not inclination to go back, not with Merriman’s just up the highway.

For a quick lunch or afternoon snack, the calamari fritti at Lailani’s on the Beach at Whalers’ in Kaanapali is a good bet, particularly if you can score a table overlooking the beach on a bright, sunny afternoon. It’s the Hawaii of travel brochures.

If we go back to Maui, it probably won’t be to Kapalua. There are other good golf courses elsewhere on the island and any other resorts have a spa. The weather at Kapalua has been problematic our last few visits. It’s the rainiest and windiest part of the island. It can be raining at Kapalua and you seven miles south you’ll find sunshine in Kaanapali or Lahaina. We haven’t been to Wailea in a long time. There’s good golf and spas there, usually better weather, and reasonable whale watching. There was a time when one could commute between the northern and southern cities of the west side of the island, but traffic has become a real issue.

We loved our visit to Kauai a few years ago. We saw the greatest rainbow either of us ever has seen. It touched down just a few yards from where we were having breakfast and lasted a solid 20 minutes. We visited many of the sites where the movie South Pacific was filmed, ate breakfast on a patio from which we had wonderful views, rode horses to waterfalls, and took a helicopter tour of the mountains. The concierge at our hotel recommended a VIP luau package that included dinner at Gaylord’s restaurant instead of the buffet luau food.

The other “do-it-again” meal on Kauai was laulau at Hanalei Taro and Juice Co., a food truck found near Princeville. Again, credit the concierges at the St. Regis for this recommendation. Laulau is a native Hawaiian dish. The traditional preparation, which is what we had, is pork wrapped in taro leaves and placed in an underground oven. Hot rocks are layered on the leaves which then are covered in banana leaves and buried for a few hours. There are several other food trucks on Kauai that offer laulau, but the concierge said this was the best. Strange thing is I’ve never seen laulau offered anywhere on Maui.

That’s pretty sparse pickin’s for two islands, just three restaurants and a food truck. I don’t want to leave the impression that there are no other places worth visiting on Maui or Kauai. It’s just that I don’t find any of them distinguished or distinctive. Go online and look at menus. After you’ve seen three or four, they all begin to look the same – aji, mahi-mahi, opa … We had some acceptable meals on The Big Island. They just were not memorable.

This is not a new situation. My culinary history in the islands dates back to the mid-1960s, when I was a partner in a tour packaging company that specialized in very high-end Hawaiian travel. Our operating mantra was there would be no more expensive Hawaiian vacation package on the market and the traveler would get his or her money’s worth and more. We were dealing with the best of the best in hotels and restaurants. The “best,” of course, is relative. Luau food was dreadful back then and still is today. We contracted with a caterer for a luau package that was exclusive to our tours and met our very particular standards.

In the final analysis, no matter which way you want to interpret the remark I heard at the airport, you don’t go to Hawaii for the food. Not in the 1960s and not now. But it’s worth going for everything else.