OBSERVATIONS FROM THE HIGHWAY 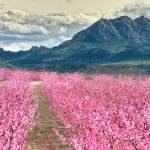 Sunday morning. Easter Sunday. We’re in the car early to head north for a visit with son John and his family in Issaquah WA, close by Seattle. Granddaughter Ella is appearing in High School Musical and grandson Miles will be defending the goal for his soccer team in a big tournament.

“Traffic should be light today because of the holiday,” I tell Jennifer as she heads toward the freeway.

The Tehachapi Mountains are beautiful, green with remnants of the bright yellow mustard grass and lavender from wild flower season. The hillsides look as soft as a giant pillow, like you could run your hand over them and they would be soft as a cat’s fur.

“Can you drive?” Jennifer asks, barely an hour into the trip.

We switch seats and she quickly falls asleep. The stereo is playing arias by Placido Domingo, Maria Callas, Mirella Freni, Luciano Pavarotti. I’m relaxed and happy as I take in the view and hum along.

Around the bend just north of Tejon Ranch. There it is, the ribbon of concrete stretching like a spine through California’s great Central Valley. The checkerboard of farms spreads in front of us, reaching for the horizon.

Where did all this traffic come from on a holiday morning?

This is the time of awakenings in the valley, still early spring when new plantings take hold and mature plants come to life. Five weeks before, when we were driving north to Sacramento for granddaughter Carlie’s birthday, the valley was a sea of pink and white almond and walnut tree blossoms. Vast fields of yellow mustard plants painted the valley floor. Young trees, barely 18 inches tall, stood tethered to the stakes that would keep the straight. New stakes stood bare, waiting for the grape vines that would be planted at their base.

Now, there were just hits of mustard plants and the blossoms had fallen, giving way to the buds of the fruit and nuts that would weigh on these branches in a matter of weeks.

Why do some people think it’s OK to drive 65 mph in the left lane of an interstate highway with a posted 70 mph speed limit?

There’s a field of fresh young trees, just tall enough to be seen above their planting cones. Here’s a field that was young trees five weeks ago, now standing proud and erect, dressed in lush green. And now a grove of mature trees, the ones that were dressed in blossoms so recently.

Those rows of new tomato plants would burst with green and then red fruit in a few weeks and those little stalks would grow into towering corn. That fresh field of alfalfa on the left, and orchard of peach trees on the right. The last of the season’s orange crop clinging to the trees on the slope.

I love this valley. It inspires me.

A DAY OF EMOTIONAL SWINGS –

The mountains on either side of the broad valley still wore caps of snow as we set out on day two, and up ahead, somewhere in the distance, there stood snowy Mt. Shasta, towering over everything. Impossibly close and so far away.

“Could that be Shasta from this far?” I asked Jennifer. “Can’t be. It’s too close.”

We passed through Red Bluff and Redding, and it still was out there in the distance, bright and white. We had driven 50 miles and it didn’t seem any closer.

There’s Shasta Dam. I’m driving now and I look out the side window at the lake. “Wow. Look how high the water level is. Remember how low it was two years ago.”

The road turns. A range of mountains with snow along the ridge line. Something’s wrong. The mountains look black but there aren’t any clouds to cast a shadow. “Oh, my god, the fire.” We approach and I’m stunned. I slow the car and move to the right lane. What am I seeing? You can’t comprehend it unless you see it. Entire mountains blackened. Black trees. Bare. No vegetation. Stumps where trees have been cut down. Black everywhere, on every hillside. This is the Carr Fire that burned in the City of Redding. We’re 50 miles north of Redding. The scope of it is incomprehensible.

Jennifer reminds me. She made this drive by herself soon after the fire, when smoke still rose from the ground and the smell was still in the air. “It looked like a scene from a horror movie,” she said.

The mountains turn green again. The road bends and there in front of us, 107 miles from where we began the day, is Mt. Shasta, covered in snow top to near the bottom. The melt off has hardly begun. A puff of white cloud kisses the top, formed by the mountain’s own weather system.

To the left and ahead, more mountains with snow at the tops. Wisps of clouds look like brush strokes against the clear blue sky. Can we forget the devastation? In time, it will restore itself and so will we. What of the rest of the state? What of next summer?

We climb into the Siskayous, cross into Oregon. Jennifer comments, “So many different greens.” We’re listening to the music of WW II. I sing along.

The pavement is wet. Of course it is. We’re in Oregon. Overnight rain. Of course.

Seattle has the reputation, but Portland gets more rain each year. So does New York. Seattle gets more days of rain. July 26 is the day of the year when it’s least likely to rain in Seattle. Any place that knows that about itself is not a place I want to live. Short winter days. No golf for six months of the year. Convertible car? Why? State flower of Washington? Mold.

Son John is here along with wife, Julie, and grandkids, Ella and Miles. So, we come.

Wait. Oregon first. Hazelnut trees both sides of the road. Didn’t know that. Grape vines in the fields and on the hills. Willamette Valley. Great for Pinot Noir.

Calving season. Lots of young cows with mommas. Some still nursing. Sheep everywhere. Oregon lamb second only to Colorado. Sonoma lamb (Northern California) also very good. Had New Zealand lamb at home the other day. Surprisingly good. Seems to be rebounding. Once was best in the world. Then it slacked.

Pork tacos for dinner at Hop Valley Brewing Co. in Springfield. They do very good ribs. Just didn’t feel like it. Not like me. I love ribs. Love Gus’ in South Pasadena. St. Louis cut. Good tacos last night after I added some of the salsa for heat and moisture. Jennifer’s fish dry. A mountain of chips (fries). Surprising. Cod fish usually is best fish and chips.

Latin music most of the way in the car. Except Placida Domingo singing Merry Widow Waltz. Written in German. Sung in Spanish. With my help in English.

Into Washington. On and off drizzle. Of course. Washington is one big speed trap. Posted limit switches back and forth between 70 and 60 for no apparent reason other than to write tickets. Three-lane interstate highway (I-5), well paved. No curves. Not mountainous. No cities. Just changes from 70 to 60.

Bright, sunny afternoon in Issaquah. Temps in high 50s. Nice after a typical cloudy, cold morning. It may say spring on the calendar. No one told the locals.

Copies of Cooking for a Beautiful Woman handed to John and Julie, Ella, and Miles. Four of the six reasons to come here. 20 minutes southeast of Seattle. The others? Gemini Fish Market. Best fish store I’ve ever seen. Issaquah Café. Like a slice out of another time. Tables and counter and staff who know most of the customers on sight. My breakfast? Old fashioned (thin) waffle with real Vermont (not thickened) maple syrup and three excellent sausage patties. Lunch? Hot turkey on egg bread with mashed potatoes, gravy, and cranberry sauce.

Locals talking about warm weather. We are wearing sweaters and heavy coats. The equinox happens all over the world at the same time. Spring in L.A. and spring in Seattle aren’t the same. Wonder what it says on a calendar in Australia on March 21. Spring or fall? Same equinox.

New discovery. Drive 90 minutes north of Seattle. Then west a bit to Mt. Vernon. See the tulips at the Skagit Tulip Festival. Been there before. Skip this step if it isn’t April. Big, snow-covered mountain to the east? Mt. Baker. West to Le Conner WA. The SLIDER Café. First time. Jennifer’s chili – excellent. My cod fish and chips – excellent. I could taste the potatoes.

Apple trees along the highway and beyond. “Cider” billboards. Fields of freshly planted alfalfa. Lots of cows.

One more thin waffle with sausage patties for breakfast to hold me until next trip. Don’t like thick Belgian waffles.

Impossible. Bright sunlight through Washington and most of Oregon. No rain. No clouds. Never before. At Canyonville OR. Indian resort and casino. Watched bad blackjack players. Sucker bets. No inclination to play. Jennifer found a slot.

Hazelnut trees on the right. Now a field of celery. Annual rye grass. Tall fescue. Wine grapes. Thousands of sheep and lambs. A hawk on a post. Not a red tail. Another overhead. Gliding.

At Sacramento. Greeted by granddaughters. Pre-birthday cupcakes and gifts with Lloyd, Edie and the girls. Nice takeout gumbo from new place nearby.

Sunshine all the way from Seattle to Los Angeles. Unheard of.

What a wonder. Cherry trees. Loaded with fruit. Ninety-nine percent of world’s almonds from CA. Same for artichokes, dates, figs, kiwifruit, persimmons, pomegranates. pistachios, prunes, raisins and walnuts. Enough rice to export to Asia. Nations biggest producer of milk, cheese, other dairy products. More cantaloupes than next four states combined, 86% of the lemons consumed in the U. S., 80% of the olives and 90% of the wine produced in the U.S., 83% of the nation’s strawberry crop and 94% of the processed tomatoes. Leads the nation in production of alfalfa hay, grapes, peaches, asparagus, broccoli, cabbage, carrots, cauliflower, celery, garlic, lettuce, honeydew, onions, bell peppers, spinach, apricots, raspberries, nectarines, and tangerines.

Nation’s number one producer of food and agricultural products for at least 50 years. 84,000 farms and ranches. $100 billion in economic activity each year. Between 300,000 people and 450,000 people employed seasonally. 450 different crops.

Nice trip. Jennifer and me. 52 years. Still travel well together.