THE FOUR-CENTURY JOURNEY OF THE UBIQUITOUS BAGEL 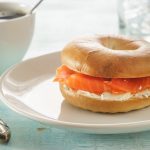 Let us consider the ubiquitous bagel, that round piece of dough with a hole in the middle that has transformed itself from the food of old country Ashkenazi Jews into a symbol of cross-cultural unity.

As a youngster growing up in Brooklyn, New York in the 1940s, I frequented many of the Jewish delis of the borough. If you ordered a bagel back then no one asked, “What kind?” There were only three – water, egg and salt. If you didn’t specify, you got the water bagel, which now is commonly called a plain bagel for reasons that soon will become apparent. If you wanted the egg or salt version you had to ask for it. As for toasting a bagel, fergedaboudit. The same thing was true in the appetizing stores, where we bought things like lox, white fish, pickled herring, cream cheese, sour cream, bagels and other breads. Just three kinds of bagels were available.

We moved west to Los Angeles in 1949 and found the few Jewish delis that existed adhered to the same bagel protocols. Seventy years later, things have changed. Ask the server what kind of bagels are available and he or she may need to pull up a chair and sit down to get through the list. What once was three bins to display the bagels – water, egg, and salt – now is a display case offering 20 or more varieties.

Bagels have broken the boundaries of Jewish delis. You can find them now in virtually any coffee shop or diner. Greg Linzner, vice president of sales and marketing at the giant Western Bagel company, says Vallarta Supermarkets, a chain of 45 stores in Latino neighborhoods throughout California, sells more bagels per week than any other outlet in the far-reaching Western Bagel supply chain. And that includes much larger super markets, many of which have stores in Jewish neighborhoods.

It reminds me of a time about 20 years ago, when I went to lunch with a staff member from one of the election campaigns I was running. We went to a deli on the Westside of Los Angeles and she ordered a bowl of chili and a bagel. I couldn’t stop laughing.

Jennifer and I didn’t choose our house because it’s just a mile from the Western Bagel plant, but it hasn’t hurt. I’m there frequently. It seems as many as 90 percent of the customers are Latino and the counter staff consists almost entirely of Latino kids from local high schools. My first job was at a Foster’s Freeze; these kids are hawking bagels.

That’s quite a journey from the Jewish neighborhoods of Krakow, Poland, where the history of bagels tracks back to the 17th century, when local ordinances dictated that bagels be given as gifts to women in childbirth. Bagels were brought to the U.S. by Polish Jewish immigrants who settled in New York City in the late 1800s and early 1900s.

Until the last half of the 20th century, bagels were made by hand. Crews would shape the dough into the familiar round form and get them ready for the boiling and baking process. Then Daniel Thompson began development of a machine to make bagels. That eliminated a lot of jobs and set in motion the mechanism by which Western Bagel ultimately would be able to produce and sell 240 million bagels last year. Linzner says his goal is to hit one-quarter billion in a year.

Western Bagel was founded by David Ustin in Los Angeles in 1947. His father worked in a bagel plant in the Bronx in New York while studying to be a rabbi. One day, David heard a representative of the Bagel Bakers Local Union say there were no good bagels in California. Now, 72 years later, David’s son, Steve, is President of a family-owned company that supplies bagels to 25 market chains and ships packaged bagels as far as Korea, Japan and Australia.

The bialys are not the genuine bialys that were sold in New York and could be tasted at Barney Greengrass in Beverly Hills before that place closed. Linzner explains those must be made by hand and it just isn’t practical. So, the Western Bagel bialy looks like the real thing but is made from the same dough as a bagel, just flatter and without the hole.

The traditional bagel is made of wheat flour, salt, water and yeast. The formed dough is boiled briefly and then baked until golden brown. There are variants within this formula, including the modern custom of steaming instead of boiling to cut down on labor.

The different varieties are created by putting ingredients on top of the bagel, not inside the dough.

Linzner says the plain bagel is the number one seller, with the everything bagel in second place. Plain is the modern-day name for the water bagel, the result of the proliferation of bagel varieties and the more appealing name in the market place. The everything bagel is topped with onion, garlic, poppy and sesame seeds and salt. At a blind bagel tasting at our house several years ago, Western Bagel was the winner in the plain bagel category and finished second in onion bagels and sesame bagels.

Soon after setting up shop in Los Angeles, David Ustin discovered west coasters preferred a sweeter tasting bagel than what was sold on the east coast and they wanted bagels with less chew. That difference persists today.

As for toasting bagels, that apparently evolved from a time when most restaurants were serving bagels that were of marginal freshness or quality. Now, however, a fleet of trucks is dispatched from Western Bagel every morning to virtually every deli in L.A. Other trucks go out each day with fresh dough to be delivered to the 11 retail outlets the company owns, 10 in Los Angeles County and one just across the line in Ventura County. Each location uses that dough to make its own fresh bagels daily. I check to make sure the restaurant at which I am eating is be supplied by Western and that the bagel is same day fresh. If you don’t ask them not to toast it, they probably will. I would never think of toasting a fresh Western Bagel. Why would I? It changes the texture and the chew. Bagels that are left over from the day before often are sliced thin, well-toasted and served as bagel chips.

A question that frequently invades a discussion of bagels is why the hole in the middle. Most likely it began as a way to more evenly and efficiently boil the dough. No one we asked could come up with a better answer. The British, however, had a different use for the hole. When bagels first appeared in London in the middle of the 19th century, clever vendors would display them on a pole that ran through the holes in a pile of bagels. I remember seeing large pretzels displayed that way in Brooklyn.

Somewhere along the way, someone decided to add capers and cucumbers to the mix of bagels, cream cheese and lox. It’s probably because capers and cucumbers go so well with salmon, and lox, after all, is salmon transformed. Neither of those things would have been found on the plate all those years ago in Brooklyn. But, then, neither would there be a bowl of chili alongside the bagel.

So, that’s it. The story of how a round piece of dough made its way from Krakow, Poland 400 years ago, to the Latino markets of California and markets, restaurants and breakfast tables around the world. For me, a nice fresh water bagel with lox, cream cheese, tomato and onion, a side of smoked cod fish and a few Greek olives is the breakfast I’ve been eating for some 75 years and will continue to eat as long as I can find one.