AT LAST, A SUCCESSFUL MUSHROOM SOUP 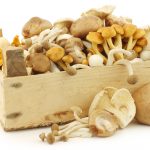 The sun was bright and the morning temperature had inched north of 60 degrees on the way to a high of 69 for the day. It was the third day of winter and the Studio City Farmers’ Market in the San Fernando Valley neighborhood of Los Angeles was teeming with shoppers, testimony to the notion that the best part of winter in Los Angeles is watching it on TV.

I left home knowing I needed a 10-pound bag of Valencia oranges. Beyond that, I told Jennifer I would browse.

For some unexplainable reason I was struck by a desire to make a mushroom soup. This would have to be considered unusual because all previous attempts at a mushroom soup had proven unsuccessful – edible but not very good. Maybe I was encouraged by a success with a new original recipe for vegetable soup in which I included two types of mushrooms that were recommended by the young woman who ran the mushroom stand at the farmers’ market a few weeks earlier. I also had encored my mushroom, beef and barley soup with the usual great success not long ago.

Anyway, back to the third day of winter. The young woman was not at the farmers’ market that day. Instead, the mushroom stand was staffed by a young man and an older woman – older but not old. I asked what they thought would be a good mixture for a mushroom soup. They asked what I planned to use for the stock. When I said “chicken” they pointed to a basket with one-pound of mixed mushrooms that was selling for $20. Most of the mushrooms in that basket were strangers to me, but if I wasn’t going to take the advice, why would I have asked for it.

On the way home I bought a pint of half-and-half, which ultimately I decided not to use. At home, I consulted a few of my cookbooks to see if I could pick up any suggestions. From there I set to work.

Jennifer proclaimed the new soup her favorite, but that’s only because she is no longer allowed to eat (drink) my split pea soup, which is a slightly altered version of the recipe in Joy of Cooking. A few days later, she decided the mushroom, beef and barley probably is her favorite in this post split pea phase of life.

Here’s the mushroom soup that evolved from that sunny day at the farmers’ market.

Wash the mushrooms thoroughly to remove any sand or dirt. Trim off any hard ends of the mushrooms. Bring the chicken stock to a slow boil in a six-quart pot. Add the mushrooms and cook for one hour. Remove the pot from the heat and hit the soup with an immersion blender. (If you don’t have an immersion blender, you should. In the meantime, use a food mill or an ordinary blender.) At this point, I had some other things that needed my time, so I put the soup in the fridge.

Later, I brought the soup back to a slow boil and added the carrots, onion, celery and cheese rind. I kept these as a low boil for half an hour, then reached again for the immersion blender. Once I had everything blended, I added the pearl barley and cooked it at a low boil for two hours.

From here you can complete the soup for serving, or you can put it back in the fridge. If you are doing the latter, take it out about one hour before you want to serve so it can get to room temperature. Then warm it over very low heat so it doesn’t stick to the bottom of the pot and burn. When you have the soup at a slow boil, add the thyme, paprika, parsley, and white mushrooms. Boil slowly for 30 minutes and you are ready to serve.

I tasted the soup and decided to skip the half-and-half and to not add a dash of dry sherry as recommended in one of my cookbooks.

Two bowls of mushroom soup made a nice dinner for the two of us.

I love it when it works like this. My first ever acceptable mushroom soup.

(ABOUT THE CHEESE RIND – This is something I learned from famed chef Jacques Pépin. He saves the hardened edges of cheese in the fridge and then tosses them into whatever soups or stews he’s making. In the hot cooking soup, they melt easily and add a mild flavor to the soup without taking over.)