The one true international food / DUMPLINGS 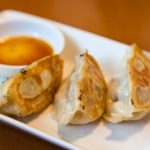 Call them piroshky, or pierogi, or kreplach, sui mai, won tons, or quenelles, matzo balls, gefelte fish, ravioli or any of a thousand other names. You can boil them, steam them, fry them, bake them, or cook them pretty much any way you want. You can serve them in soups or stews, in sauce or gravy, as a side dish, an appetizer, a main course, or dessert. They can be solid, or stuffed with meat, fish, vegetables or sweets. They can be made from dough, grain, potatoes, bread, fish, cheese or just about anything else you can imagine.

They exist in every nation and every culture. Some are served as everyday food; some appear only at holiday meals. They are the one true international food.

Whatever else they may be called, the universal name for them is dumpling.

In the southern part of the U.S. people love their chicken and dumplings; in a Jewish home it will be chicken soup with matzo balls. Italians have ravioli or tortellini, while Chinese have won tons, Jewish cooks have kreplach and the French have quenelles.

The differences between some of these delicacies often have more to do with the language of the people serving them than with the item itself. Minced meat – chicken, beef, lamb, or pork – boiled, steamed or fried in a noodle-like dough is a wanton in a Chinese home, kreplach in a Jewish home (except for the pork), ravioli in an Italian home, or manti in Central Asian households. They also are staples in Afghanistan, Kazakhstan, Krgyzstan, Tajikistan and Uzbekistan.

Use a different dough, bake ‘em instead, and you have a piroshky in Russia, a pierogi in Poland, or an empanada in Argentina.

Wikipedia says a dumpling is a “small piece of dough made from a variety of sources often wrapped around a filling.” But the dumplings in chicken and dumplings are just flour, salt and water formed into balls and cooked in soup. By that definition things like matzo balls, gefelte fish, quenelles and the like also qualify as dumplings. And if gefelte fish is a dumpling, why not meat balls?

I went to Bing recently and searched for “Dumpling Cookbooks”. (That’s Microsoft’s version of Google.) I got 16.4 million hits. As always, with the internet, that doesn’t mean there are 16.4 million dumpling cookbooks, just that many variations on the theme. In short, there are too many things that qualify as dumplings for us to even summarize them here. Wikipedia lists a dozen different dumplings under a heading of India. The research tool also shows dumpling varieties under headings for Asian cuisine, as well as African, Central Asian, Chinese, Indonesian, Filipino, Japanese, Korean, Mongolian, Nepali, Caribbean, Brazilian, Chilean, Jamaican, Peruvian, Puerto Rican, British, Irish, Central European, Eastern European, Italian, Norse, Swedish, Arabic, Jewish, and Turkish cuisine.

If that isn’t the definition of one true international food, I’d like to know what is. Here are two recipes for very different kinds of dumplings. Both are in my soon-to-be-published food memoir Cooking for a Beautiful Woman. The sui mai is in the chapter that highlights my relationship with Elizabeth Blackstone, a high school teacher who had been a Christian missionary in China and got out two weeks before the Communist takeover in 1949. The matzo balls are from the chapter featuring my mother, who was a big band singer at Manhattan nightclubs in the 1930s.

Combine the first 10 ingredients in a bowl. Mix gently but thoroughly. Place the mixture in the refrigerator for about 1 hour.

Place one rounded teaspoon of the mixture in the middle of each won ton skin. Gather the sides of the skin around the filling, leaving the top open. Place the dumplings in a single layer on a steamer rack. Cover and steam over rapidly boiling water about 5 to 6 minutes. Serve hot with dipping sauce.

Combine all the ingredients in a glass bowl. Let stand at room temperature several hours to give the flavors a chance to blend.

(The best matzo balls included seltzer water from the old-fashioned pressurized bottles. It’s hard to find that these days. So, try to find the most highly carbonated, unflavored water you can.)

Beat the eggs until they are light and frothy. Add all the ingredients to the eggs and mix together thoroughly with a fork. Cover with plastic wrap and let stand at least two hours in the refrigerator. Bring the salted water to a boil. Form the mixture into balls with a soup spoon. Drop the balls gently into the boiling water, taking care to avoid overcrowding. (Matzo balls will expand as they cook.) Cook about ½ hour at a moderate boil, until matzo balls are light and airy and any sign of uncooked mixture is gone. (I find it helps to turn the Matzo balls over in the water, using a slotted spoon, for the last 10 minutes.)

(After the Matzo balls are done you will find cooked batter floating in the water. For a treat, drain it, add a little salt and pepper and eat it with a spoon.