THE GREAT HATCH CHILI EXPLOSION / 10 years ago I never heard of them, now they are everywhere (with a family recipe for Hatch Chili enchiladas) 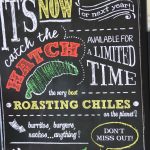 Ten years ago I had never heard of a Hatch Chili. Then, somewhere along the way, my friend Carl D’Agostino mentioned them in a telephone conversation. He became poetic in recalling his boyhood in New Mexico, where the family ate Hatch Chili enchiladas every Friday night.

That’s inside the market. Outside there’s a sign notifying of a big Hatch Chili roast coming to the parking lot in a few days – “buy a case and we’ll roast them for you.” When the day arrived, I saw one woman buy 10 cases. Three young men loaded a succession of cases of chilies into rotating roasters heated by a flow of 500-degree air.

Hatch Chilies get their name from the Hatch Valley in New Mexico, the only place where they are grown in commercial quantaties. The area grows a wide variety of other chilies, but the Hatch is what makes it famous. The village of Hatch lies about 40 miles northwest of Las Cruces, New Mexico, near the southwest corner of the state. The small village of some 1,500 residents sees as many as 30,000 people pour into the area for the annual Hatch Chili Festival each Labor Day. Agriculture drives the local economy.

Many years after Carl moved to southern California, he learned that one Hatch farmer was bringing a pickup truck loaded with Hatch Chilies to La Puente, a small city in the San Gabriel Valley, east of downtown Los Angeles. Carl and his late wife, Evelyn, would stock up on a year’s worth of chilies and the Friday night ritual of his boyhood was revived. It wasn’t long before a single pickup truck load of chilies wasn’t enough and more would arrive at La Puente each year, with people from throughout the Los Angeles area flocking to buy them. Then, in about 2012, the lid blew off the marketing of Hatch Chilies and they began to show up in markets throughout the southwest.

Most Hatch Chilies are sold green, which is Carl’s preference. The first time I saw them, there was a small mountain piled just inside the front entrance to the super market where I do most of my shopping. The sign proclaimed something like: Hatch Chilies, straight from New Mexico. The season is short, so get them now.

Allowed to ripen, the chilies turn red. My market has nothing but green ones, so I can’t use them because Jennifer takes blood-thinning coumadin and the chilies are high in blood-thickening vitamin K. I guess I could buy some and let the turn red at home.

Hatch Chilies are sold in six different levels of heat and the upper levels are very, very hot. According to Wikipedia, Adam Richman, host of the television show “Travis on a Silver Platter” Man vs. Food Nation, described the flavor of Hatch Chilies as: “lightly pungent similar to an onion, or like garlic, with a subtly sweet, spicy crisp and smoky taste.”

The ripened red chilies, according to Tilde Herrera in the San Francisco Chronicle, “… retains the flavor, but adds an earthiness and bite, while aging mellows the front-heat and delivers more of a back-heat.”

The soil in Hatch Valley creates a unique terroir, which flavors the chilies just as terroir lends flavor to wine grapes.

Carl D’Agostino now lives in Sacramento, CA. He is retired after a career as one of the state’s most prominent and successful political consultants. With his partner, Michael Berman, they operated for decades at BAD Campaign, the BAD for Berman and D’Agostino. Together, they were anything but bad, winning major elections in California and helping Democrats win congressional elections across the nation.

When the signs first appeared in the markets in late August announcing the arrival of this year’s crop of Hatch Chilies, I called Carl to ask for the recipe for the enchiladas that have accompanied him through life. He gave a rough description of how they appear on a plate and told me he doesn’t do the cooking himself. That was left to Evelyn and now to their daughter, Ellen. He promised to have Ellen send me the recipe. Here’s what she provided.

FIRST, YOU NEED TO PREPARE THE CHILIES
In the oven –
Pre-heat the oven to 400 degrees. Poke holes in the chilies to prevent them from exploding. Put the chilies on a cookie sheet or some other oven-safe, non-stick surface. After six to eight minutes in the oven the chilies should be blistered.

Under the broiler –
Turn your broiler up to its highest setting. Poke holes in the chilies and put them as close to the heating element as possible. Take the chilies out of the oven as soon as the skin is mostly blistered. You probable will want to turn them over after three or four minutes.

Stovetop –
Use a heavy wire rack. Poke holes in the chilies. Place the rack on the heat source. When the rack is very hot, use tongs to put the chilies on the rack. Turn the chilies frequently until the skin blisters on all sides.

On the grill –
Poke holes in the chilies. Put the chilies on a charcoal grill about five or six inches above the glowing coals. Turn them with tongs until they are blistered on all sides.

In a microwave –
Poke holes in the chilies. Put them in a microwave-safe dish. Cover with an air-tight lid. Put the container on a rotating plate in the center of the oven for seven to eight minutes, depending on the oven being used. You won’t see the skin blistering with this preparation, but the skins will become tough and brittle. Let the steam fully develop in the container for a minute or two after cooking. Be careful when you remove the lid as steam will be release.

Peeling the chilies –
Here are some safety tips: allow the chilies to cool before handling; use safety glasses; don’t wear contact lenses while peeling; wear gloves and a long-sleeved shirt. When the chilies have cooled, the blistered skin should pull off the flesh fairly easily. An occasional rinse with water might help. In areas that are not completely blistered, use a sharp knife or vegetable peeler to remove the skin. Peeling will be easier if you put the chilies in a sealed plastic bag or covered container while they are cooling. Peeling under running water can help separate the skin and make the whole process go more quickly.

Storage –
For best storage in a freeze, use a shallow container or freezer bag. Too many chilies in one container, or too deep a container, allows ice crystals for form and will turn the chilies mushy when defrosted. You may slice the chilies open before freezing. Remove the seeds and membrane. Freeze them whole and chop them when you are ready to use them, or chop them before freezing and freeze in individual portion sizes. You also can freeze the chilies unpeeled and peel them after they are frozen.

FOR THE ENCHILADAS –
Let’s assume the quantities of everything in this recipe are “to taste”, which I can understand given the ingredients being used.

What you will need –
• Hatch green chilies – roasted, peeled and chopped. (Do this yourself or buy it already roasted in one-pound freezer bags if your market carries them.)
• Onion, finely chopped
• Corn tortillas (3 per serving)
• Grated medium or sharp cheddar cheese
• Eggs
• Broth (your choice of chicken or beef)
• Salt and garlic
• Vegetable oil (optional)

Methodology –
Put the chopped chilies in a pan with enough broth to make it like soup. Add a dash of salt and garlic, and heat to simmer.
Heat about one inch of oil in a pan and cook the tortillas quickly on each side, turning with tongs. Remove the tortillas while still soft. Drain on a paper bag covered with paper towels. If you don’t want the grease, quickly dip each tortilla into the hot chili and broth mixture. Turn with tongs to cook both sides. Be careful, if you don’t move quickly, the tortilla will fall apart.
Place a softened tortilla on a plate. Layer it with some chopped chili depending on how spicy you want it. Spread a layer of cheese on top and sprinkle with onion. Add another layer in the same manor. Add one more tortilla. Top with a little more chili, some cheese and onions. Microwave about 1 minute, until the cheese melts.
While the enchilada is in the microwave, fry two or three eggs in vegetable oil, however you like them. Remove the enchilada from the microwave. Top with eggs, some cheese, a few onions and a drizzle of the chili with the hot broth.

Ellen says to enjoy this with a margarita or iced tea.

These are the basics. I can think of a few things I would do differently. For instance, I prefer flour tortillas. I would soften the tortillas in a heated non-stick pan and skip the oil, or if I wanted to use the oil it would be a lot less than an inch deep. I don’t have a microwave, so I would do the final step in the oven. I doubt that Carl’s mother – Ellen’s grandmother – had a microwave either. Now, if I could just find some place to buy red Hatch Chilies instead of the green ones …