SUBS, HOAGIES, GRINDERS, TORPEDOES, FOOT-LONGS / a sandwich by any other name is still a dream come true 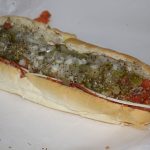 I’ve been eating submarine sandwiches for close to three-quarters of a century, since I tasted my first one with my dad in Brooklyn, NY in the mid-1940s. We called them heros, not subs, or submarines, or any of the dozen or more other names by which they are sold. While we were at it, dad also taught me how to eat hot peppers (jalapenos) with the sandwiches without setting my mouth on fire. I was about eight or nine years old when I learned that trick.

Cured meats, be they Italian or Jewish, have been a thread through my entire culinary life. It started with hard salami at home in Brooklyn. Dad installed a hook in the ceiling above the kitchen counter. From that hook were suspended a succession of Hebrew National salamis. We would buy them hard and they would get even harder as the fat drained into tin foil cups secured to the cut (bottom) end by a rubber band. Salami sandwiches on rye bread were a staple in the lunch boxes we took to work on dad’s home delivery seltzer truck. On days when we ate at one of the many Jewish delis along his route, I might deviate and have a corned beef, pastrami, or tongue sandwich instead.

For heros we would visit a place alongside the steps leading to the elevated train station around the corner from our apartment. These sandwiches were pretty much the same as what is sold today around the world. Start with a good, fresh-baked soft roll. Layer on some provolone cheese, then an assortment of Italian meats (salumi) – mortadella, dry salami, capicolla, cotto, soppresatta, and maybe some pancetta. Top it with diced onions and pickles, sliced or diced tomatoes, maybe some shredded lettuce, pepperoncini, and dress it in some olive oil-based concoction that includes dried oregano and other Italian herbs. Sprinkle on some black pepper and you have it.

That’s the sandwich that began humbly as the Italian meat sandwich someplace in the northeast U.S. a hundred or so years ago and now is being sold at some 45,000 Subway sandwich franchise stores in 100 countries, the largest restaurant chain in the world. The quality of the sandwich at any store, whether one of those franchise locations or any of thousands of stand-alone owner-operated shops, depends first on the quality of the bread, as is true with just about any sandwich. Then there are the varying qualities of the meats and cheese, which can run the gamut from factory-made commercial level products to delicacies imported from Italy.

Through the decades, I have encountered these sandwiches under more names than I can recall. Whether they have been called submarine sandwiches, subs, hoagies, heros, grinders, torpedoes, battleships, destroyers, po’ boys, spuckies, garabaldis, blimpies, zeppelins, bombers, foot-longs, or wedges, they all amount to the same thing – a long soft roll, cut in half lengthwise and filled with meat, cheese and vegetables. The different names spring from different regions and each has multiple stories regarding its origin.

It may seem obvious that the name submarine stems from the shape of the roll used for the sandwich. By one account, the name was attached by Italian immigrant Dominic Conti, after he saw a recovered submarine in about 1901. Conti is credited with bringing the sandwich with him from Montella, Italy and first selling it at his grocery story in Paterson, New Jersey around 1910. Another story claims the sandwich came into being in New London, Connecticut, site of the navy’s primary submarine base during WWII. However, researchers found references to the submarine sandwich in Wilmington, Delaware before the U.S. entered the war, according to Wikipedia. Any or all of these may be true. The sandwich could have had multiple beginnings in different places in the U.S. as Italian immigrants set up show throughout the northeast.

As for the heros we ate in New York – yes, heros, not heroes – some believe New York Herald Tribune food writer Clementine Paddleford first used this term in the 1930s. Others believe it is derived from the Greek gyro. Others believe the name derived because eating one is an heroic act.

Hoagie? It seems to stem from the Philadelphia area. One account claims Italians working the WWI era shipyards at Hog Island in Philadelphia introduced the sandwich, which first became know as the Hog Island, then hoggie, and finally hoagie. Or was it the “hokey-pokey men” who sliced the sandwich at bakeries that gave birth to the name hoagie? Or maybe it comes from the South Philly Italian neighborhood where people down on their luck were said to be “on the hoke” and deli owners would give them scraps on a bread-roll and call it a hokie?

Who knows the origin of any of these names for the same sandwich? Does it really matter other than as regional pride? A true fan probably doesn’t care other than for curiosity. More important is good bread, quality meats, good dressing, and nice cheese.

After our family arrived in Los Angeles in 1949, dad and I were forced to forego heros for several years because there just weren’t any around. The closest we could come were French Dips, made up of inferior grade pastrami and served on inferior grade rolls dipped in some kind of overly salty liquid at a chain of stores and imitators throughout the region. These were terrible knockoffs of the excellent dipped sandwiches served at Phillipe’s and Cole’s in downtown Los Angeles.

Then, in 1956 – my senior year in high school – along came Santoro’s Submarine Sandwiches, on Burbank Blvd. in Burbank, California, less than a mile from where we lived and just a few blocks from the school I attended. With friends, I would go there for lunch about once a week. What was a revival for me was new to my friends. Santoro’s quickly became an institution as word spread to nearby cities. Dad and I would stop in frequently on Saturdays. When I worked at the Burbank Daily Review, there were lunchtime runs to fetch sandwiches after we put the paper to bed. This many years later, I still look forward to dropping in for an Italian cold cuts sandwich at Santoro’s. I can’t eat as many hot peppers as I once did, but I manage a few.

Santoro’s is nine miles east of where Jennifer and I live. Eight miles in the other direction – southwest – there is Domingo’s Italian Deli. L.A. doesn’t have a Little Italy, but Domingo’s comes close to filling the gap. It’s a top notch grocery store that also serves sandwiches and other Italian dishes to eat in or take out. In addition to the Italian meat sandwich, Domingo’s offers something called a Traditional Dom, which they say is more like the sandwich as it is served in Italy. For this, the vegetables are finely chopped and spread on the bottom half of the roll. The cheese and meats are layered on, the olive oil dressing is applied, and that’s it. The rolls are baked fresh daily in house and many of the meats are imported from Italy. Although, I can’t find any reference to this style of sub sandwich anywhere other than at Domingo’s, that doesn’t stop me from driving over for lunch every few weeks.

We didn’t plan it this way when we bought our house 38 years ago, but I wake up each morning happily about equal distance between two outstanding submarine sandwich joints, a fact that probably would give my cardiologist nightmares. For me it’s a link to those days in Brooklyn three-quarters of a century ago and to the dad who showed me how to appreciate how important it is to have a good hero sandwich shop nearby.

(The sandwich in the photo is an Italian cold cuts sandwich at Santoro’s.)