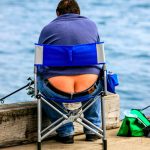 She was wearing a nice dress, dark with a muted floral print. Tasteful ear rings, hair well dressed. Totally appropriate for a Saturday night dinner at a nice restaurant. She looked to be about 30 years old.

The man with her appeared to be about the same age. He wore a black tee shirt not tucked in, blue jeans, and sneakers. She sat on the bench seat of the booth; he sat opposite her on a chair, well-placed so his lower back and butt crack were visible to all when his shirt rode up and his jeans pulled down as he leaned into the table.

It’s at times like this that make me wonder: doesn’t she care; doesn’t he care? Doesn’t she care enough to tell him to dress a little better if he wants to accompany her in public. Doesn’t he care enough to show respect for her and for the place they are going? While it isn’t conclusive, neither of these people were wearing wedding rings, so there’s a reasonable chance this was a date, not a married couple.

This rant has been building in me for several years as the level of decorum has eroded in American society. It always seems to be the men who offend my personal sensibilities. Jennifer and I go to the opera and I see nicely dressed women: black cocktail dresses or long gowns, classy cloak or jacket, pearl or diamond necklace and ear rings, lovely shoes to match the rest of the attire. And the guy with her: plaid shirt, khaki pants, sneakers or even sandals. It’s been happening with increasing frequency for at least the last decade. I can overlook the shoes he’s wearing now that I have to wear orthotics much of the time because I’ve developed plantar fasciitis. But even with this condition, I change to my regular dress shoes when we go out for the evening. Maybe he has a condition that won’t permit this. But, by god, there’s not excuse for everything else, for not caring.

Why doesn’t she look at him and say, “It’s the opera, damn it. It you don’t want to go, just say so. I’ll find a friend to go with me.” Or, if it’s a date the opera probably isn’t a first date, so she should know better. If it’s a date and he shows up at her door dressed like that, why doesn’t she just tell him “never mind.” I hold each of them equally responsible – him for his lack of respect and her for not speaking up, whatever the reason for her silence. They each are guilty of killing couth in America.

As I write this, I anticipate some of the responses I will receive. I will be accused of being out of date, out of touch with modernity, and maybe worse. To these I plead guilty. I will admit, there is much about “the good old days” that wasn’t very good. But there were things that spoke to the civility of society, and I defy anyone to defend the notion that today’s society is more civil than the one in which I grew up. As far back as high school, I knew to wear a coat and tie when taking a date to dinner and a show. When Jennifer and I started dating, in our late 20s, there was no way I would show up at her door for a night out in jeans and sneakers, unless the plan for the night was a hike, or a sporting event. After we married, and still today, with Jennifer and with friends – male and female – I’m not going to the opera in anything less than a suit; I’m not going to Melisse or Le Bernadine without a tie.

You can defend today’s standards all you want, you can accuse me of being old-fashioned or anything else, but I just don’t want to see your butt crack.