AN AMERICAN ABROAD AT A STRANGE TIME – Part four / D-Day at Normandy, then and now 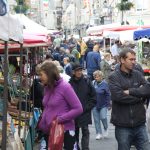 I stood on the sand at Utah Beach and felt history sweep over me. I walked the sands of Omaha Beach, looked out at the roiling sea and envisioned the waves of American soldiers landing on the shore.

It was June 6, 2017 – the 73rd anniversary of D-Day, the day American, British and Canadian troops stormed the Nazi bunkers on the Normandy coast to begin the liberation of France. I cannot recall a time when I didn’t want to visit this place. That it could be on the actual day of the anniversary and with Jennifer, a child of the war, beside me made it even more meaningful.

I’ve never been a fan of the glorification of war. I’m partial to the words of Paddy Chayefsky in “The Americanization of Emily,” where he wrote of military parades and other such displays as a way to assure that future generations view death in battle as a worthy goal. Because of that,  a hint of antipathy tinged my anticipation of the day.

What I found, however, was not glorification but commemoration, a distinction I had not considered before. Those who died on these beaches altered the course of history and halted a monstrous time in the journey of humankind. I cannot use the word sacrifice for what they did because to me sacrifice is something done voluntarily. No one volunteered to be there or to die that day. They were drafted and sent to fight in what admittedly was a worthy cause. Their bravery cannot be denied, as they did what they did in the face of what must have been unmeasurable fear.

There is a somberness about the Normandy beaches, museums and cemeteries and a distinct absence of the kind of commercialization we expect at tourist attractions in the U.S. We found gift shops only in the museum and restaurant at Utah Beach.

There are Nazi bunkers to be visited, craters from Allied bombs left unfilled, barbed wire that blocked the advancing armies still in place. Massive blocks of concrete shipped from England to aid the landing are clearly visible beyond the tide line. The seawalls put in place by the Germans to block a possible landing are maintained as an historical reminder.

We spent almost no time in the Utah beach museum, where remnants of the German war machine are on display. We felt we didn’t need to be schooled regarding the Nazi atrocities. It is important that they be on display for succeeding generations. But Jennifer and I witnessed the war from our two different perspectives, she as a child in London and me through the newsreels and newspapers in New York and subsequent readings of history. The simple sight of a gas mask shook Jennifer. It was one of her earliest memories of life in England.

No matter how may movies and documentaries we have seen, it is impossible to envision the scope of the D-Day operation without actually seeing it. The five beaches that were the landing sites stretch for 80 miles – 80 miles of landing craft, helmeted troops, trucks and tanks advancing and Nazi machine guns and cannons raining hell on the liberators. The landing craft appear much larger in the movies we see than the actual ones used that day and on display now.

We were able to go into the Nazi command bunker and see the ocean as they might have seen it that day. We also could see how the weather and natural terrain hid many of the Allies from Nazi view. Our tour guide, Gisele, was a 40-year-old Brazilian woman whose degree is in history. She took us back to WW I and the emergence of Hitler and through a description of the strategic planning, logistical preparations and actual moments of the landing. Much of it I knew; some I had forgotten; some of the information was new.

We drove through the countryside along which the liberating armies began their march to free Paris, passing many of the same homes and farms that were there 73 years ago. .

It is unimaginable, all of it is fathomable, without actually seeing it. And we saw it on a cold, windy, rainy day – not as rough as it was 73 years ago during the actual landing, but rough enough to create the feeling. Gisele told us for the last five years D-Day had been bright and sunny and to her that never seemed right.

I look at most military cemeteries through the prism of Chayefsky’s writing. But once again, the American cemetery at Normandy is a commemoration, not a celebration. Jennifer looked out across the cemetery, with the sea to the right and all the crosses and stars of David facing west toward the U.S., and she wept a silent “thank you for saving my country and giving me my freedom.” It’s something she can feel that I never could.

That’s the kind of place the Normandy coast is today. All these years later, the French have not forgotten. Signs in shop windows read “Thank you, liberators.” French residents and foreign visitors, both military and civilian, mingle with a sense of mutual respect and understanding. There is no glorification of war here, no aggrandizement of warriors, just a reminder of what must never again be permitted. Gisele told us visitors come from all over the world, but not from Germany, Japan, or Russia.

Now, on summer days in good weather families gather on the beaches for picnics. Children splash in the water and shout with joy. That’s the way it was before the war and restoring this place to its people was part of what happened on June 6, 1944.

But on this day – June 6, 2017 – as night fell on another anniversary, the restaurants were full. Men and women in uniforms from many countries, visitors mostly from American and Britain, and French locals gathered to sip wine and eat dinner and appreciate the freedom that has been handed down to them.

Life goes on today in the City of Bayeux, where we were staying. This was the first city liberated by the Allies. It served as the capital of France until the liberation of Paris. And today, just another Wednesday morning, we strolled with hundreds of local residents through an outdoor market, where ample supplies of fish, chicken, cheese, and produce were on display. For lunch, we sat with French shop workers and business owners and sipped wine and ate chartoucherie, cheese and pate.

This was a day to relax and reflect on what we witnessed yesterday before moving on with our travels – a day to realize that for having been here, our lives will never be quite the same.

(The photo with this article is the street market in Bayeux the morning after the D-Day anniversary.)

(NOTE: Fifty days after D-Day, my uncle Irving Zucker was killed in the Battle of the Hedgerows, not far from here. I remember him well and dedicate this trip and this feature to him.)