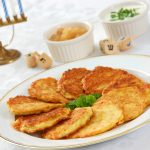 Each year about this time my father would get out the old box grater and set to work hand-grating potatoes and onions for Hanukkah latkes. Mom would peel the potatoes and put them in cold water to keep them from discoloring until Dad could get to them. Most often, we would have company for the first night of Hanukkah and mom would make a brisket or some kind of roast beef to go with the latkes. This is how I learned to eat raw potato, devouring the last end of each one that was too small to grate without risking damage to the fingers. Let’s just leave it at raw potatoes are not for everyone’s taste.

After dad died in 1980, the latkes parties moved to our house and the grating chores fell to me. The first couple of years I continued the tradition of grating by hand. Then I realized there is a “grate” button on my blender. I said a silent apology to dad and decided to experiment. I quickly discovered I had to add water to the blender bowl to keep things moving. The grating went well, maybe a little finer than the coarse grating dad once did, but a whole lot easier.

My latkes won raves from everyone at the table. When I revealed I had abandoned the grater for the blender, all agreed they couldn’t tell the difference.

I’m posting this recipe now, in time for Hanukkah, which begins Dec. 2 this year. I’m going to leave the recipe it up as a feature all month. Latkes will go well with your Christmas turkey, if you are so inclined, or any other big, festive dinner you are planning this month or in the future.

POTATO LATKES
1 lb. russet potatoes, peeled and grated
1 medium brown onion, grated
1 large egg, lightly beaten
Matzo meal as needed
¼ tsp salt
¼ tsp black pepper
Vegetable oil
Peel and grate the potatoes – either Dad’s way by hand, or in a grater. Put batches of grated potatoes in cold water as you go to prevent them from discoloring. When all the potatoes are grated, let them soak in the water about 2 minutes, then drain them well. Grate the onions and stir into the potatoes in a mixing bowl. Stir the egg into the potato and onion mixture.

You are going to want the mixture to be moist but not runny. If it’s too watery mix in some matzo meal until you get a consistency that will stand frying. You don’t want it too dry, either. Stir in the salt and pepper.

Heat ¼ cup of oil to medium high in a wide frying pan. Don’t let it start to smoke.

You will want about 2 tablespoons of the potato mixture per latke and you will want the latkes to be fairly thin. Reduce the heat to medium. Put the mixture into the hot oil and flatten into rounds of about 2 ½ inches each. Fry until the undersides are browned and crispy – about 5 minutes. Turn the latkes over and fry until the second side is browned and crispy – about 5 more minutes. Remove the latkes from the pan and place them on paper towels to drain the oil. Add more oil to the pan if needed and skim off fried bits left in the pan before adding more of the mixture.

To keep latkes warm while making additional batches, after they are drained on the paper towel, put the latkes on a wire rack in a shallow baking pan and put them in a preheated oven at 250 degrees.

Serve with apple sauce and/or sour cream, or just serve the latkes as a side with a tri-tip roast, skirt steak, or prime rib.