EATING OUR WAY THROUGH BELLAGIO / Italy, not Las Vegas 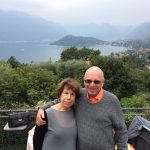 By Barry and Bev Wellman –

Bellagio, Italy, must be the only village that has a Las Vegas hotel named after it. 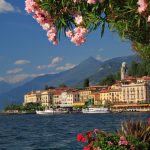 No wonder! Its setting is spectacular, and its ambiance so enchanting that residents of Milan use it as a summer getaway. It’s two hours north by car, train, or boat on a promontory where Lake Lecco meets Lake Como. It looks like the inverted – Y of a peace symbol. 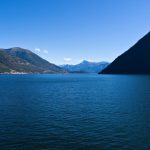 Lake Como’s beauty has been celebrated through the ages. George Clooney owns a villa and even shot part of Ocean’s 12 there. In Roman times, Pliny the Younger had his two villas – called “Tragedy” and “Comedy” – in Bellagio. It’s been an elite gathering place since the early 1800s, when the vice-president of the First Italian Republic built Villa Melzi there. As the French writer Stendahl wrote in 1810:

What can one say … about Lake Como, unless it be that one pities those who are not madly in love with them … the sky is pure, the air mild, and one recognizes the land beloved of the gods.

We, too, love Lake Como and have been to Bellagio six times. This September and October (2017), we had wonderful times revisiting two of our favorite restaurants and experiencing two new ones. All the restaurants and shops are small and family-owned. Our top three are a bit out of town, but easy to get to, and the journey is part of the fun.

Al Veluu:  If you want a view that will last a lifetime, you have to go a bit outside of Bellagio. Take the frequent 10-minute ferry across Lake Como to Cadenabbia, and then drive or get picked up by car to go 4 minutes (2 km.) up a twisty hill road to Al Veluu in Tremezzo. Try to sit on the restaurant’s patio for a spectacular view of Lake Como on one side and the pre-Alps on the other. It’s where Barry chose to celebrate his 75th birthday lunch.

The owner, Luca Antonio, picked us up at the ferry dock in his hot new BMW. His parents, Pina and Carlo, started the place in 1974 after working in high-end St. Moritz resorts. Luca and his brother Adriano took over in the late 1990s. Luca’s English wife, Cheryl, runs a small B&B on the premises. (While driving, Luca told us that a “veluu” is a Mediterranean sail.)

In this online food magazine, editor and publisher Larry Levine called Al Veluu the single most memorable restaurant meal experience he ever had for the combination of food, view, and rustic ambiance after lunching there in 2005. We agree – it’s still wonderful. 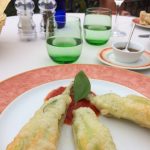 Even on a cloudy day, the view continues to inspire and so does the food. Everything is local, fresh, and not excessively prepared. Luca himself serves and talks about what is fresh from their garden and what is no longer in season, such as his figs. We began with prosecco, which complemented the zucchini flowers stuffed with ricotta cheese on a bed of red tomato coulis. This was followed by veal scaloppini smothered in newly-picked porcini mushroom sauce, accompanied by zucchini fries paired with a pleasantly astringent local Gavi wine. Lunch ended with a flavorful panna cotta surrounded by fresh fruits. Everything was beautiful at Al Veluu and Barry got his birthday wish. After two hours of basking in the view and the food, Luca drove us back to the ferry, which gave us wonderful views of Bellagio itself as we crossed Lake Como.

Salice Blu: If Al Veluu was the best moment of the trip, Salice Blu (blue willow) was the best food – probably one of the most outstanding restaurants in Italy. We went there for Barry’s birthday dinner.

Salice Blu is about a 20-minute walk along a twisty local road outside of Bellagio. You can walk up the hill, but the chef himself, Luigi Gandola, offered to pick us up for the 5-minute drive. Along with his personalized “self-taxi” service, Luigi has become a famous chef in Italy – doing frequent TV shows.

Like Al Veluu, Salice Blu is two generations old. We first met Luigi a decade ago, when he was just coming into his own. He’d already won a Culinary Olympics gold medal at the age of 24 for his watermelon carving. Since then, he has been voted the Best Chef in Lombardy. His family is 100% behind him: his mother, Flora, still works with him, cooking, while his grandmother prepares and cleans up in the kitchen. The dining tables in the recently renovated restaurant face the glass-walled kitchen, where a team of three works with Luigi and his mother. In the summer there is an outdoor dining terrace.

The real proof of Luigi’s talent is in the presentation, combinations, creativity, informality, and exploding tastes, all of which are part of the dining experience. We skipped the gluten-free options, a rarity in Bellagio, and had the smaller of the two tasting menus at €70 each (Cdn$104; US$80). The larger tasting menu would have been too much of a good thing. 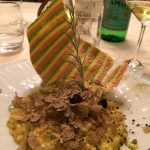 The menu focuses on “renovating” the traditional Northern Italian dishes. Bev had a wonderful pâté de foie gras with port, apple and fig jam. Barry had an equally good porcini mushroom salad with Prosecco for each of us. We followed with the best risotto of our lives, made with black truffles, saffron and zucchini flowers, garnished with a tricolor sheet of pasta. The main dish in this “small” tasting menu was steamed salt cod with leeks over polenta. Risotto and polenta are at least as much of a staple as pasta in northern Italian restaurants. A white wine, Valcalepio Bianco from nearby Bergamo, washed it down. We finished with a lovely three-chocolate soufflé with chocolate ice cream and Tahiti vanilla sauce. We also gaped at the neighboring table’s chocolate pyramid with meringue, ice cream and gelato. Our gaping led to making friends with Mara and Matt from Parma.

Alle Darsene di Loppia: Unlike Al Veluu and Salice Blu, Alle Darsene di Loppia was a new find for us. (Darsene means docks, and Loppia is a small onetime fishing hamlet that exemplifies quaint.) It’s the easiest to get to: a 20-minute walk along the Como lakefront and through the gorgeous gardens of the Villa Melzi. The garden-walk costs €6 all day, or you can detour around it along a busy road. Melzi d’Eril himself was an early supporter of Italian unification.

The restaurant has a nice vine-covered pergola by Lake Como. The small harbor holds one of the few remaining Lake Como transport boats called comballi, with hoops for canvas covering – like a water-borne version of the Conestoga wagons that settled the American west.

Having stuffed ourselves in our earlier meals, we ate less fully for a lovely lunch. It was a fine meal, but having never been there before, we didn’t have the same intimate conversations with the proprietors that we’d had at Al Veluu and Salice Blu. 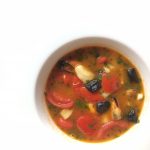 Barry started with a thick fish soup (zuppetta) with mussels and Bev had homemade cavatelli pasta. Both were tasty and unusual. Barry’s main course was nicely sauced topside of lamb with potatoes and porcini mushrooms, while Bev enjoyed panko-crusted John Dory, also over polenta, with burrata cheese and sea asparagus on the side.

For dessert, we walked back through the Villa Melzi Gardens to the promenade at the heart of Bellagio to have one of our dream desserts at Rossi: an “affogato” of espresso poured over vanilla gelato.

In the Heart of Bellagio

La Fontana: You don’t have to leave Bellagio to have a good meal. The restaurant we liked best, La Fontana (The Fountain), is filled with vitality and good food. It’s up a hilly staircase-street (salida). When the proprietor took our order, he told us, “I ran a restaurant in Miami Beach for 30 years, and that’s a southern branch of New York City.”

Bev had a typical fileted branzino, while Barry had a filet of orata – known as dorade in North America – with a sliced potato crust, cherry tomatoes and capers. Orata is a Mediterranean fish,  not local in Bellagio. Why not lavarello, the typical northern Italian lake fish that many Bellagio restaurants serve? It’s very bony and orata is fresher this time of year. 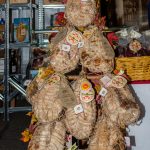 B-Style: B-Style is a small wine-bar, not a restaurant. It was perfect for our new acquaintances from Salice Blu, Mara and Matt, to join us on their last night in Bellagio. What makes B-Style special is their prosciutto imported directly from its sacred home of Parma, and even more impressively, culatello from the same area. Matt and Mara explained that culatello is to prosciutto as prosciutto is to regular ham. Culatello is ham made from the muscular part of the hind legs of pigs that is salted and air-dried for over a year in caves and farmhouse cellars in the town of Zibello near Parma. Thinly-sliced, like prosciutto but darker and more expensive, it was delicious and worth the price. For people tired of big meals a plate of charcuterie, local cheeses, prosecco, and nice conversations with the owners was the perfect way to say good-bye to Bellagio.