THE MUD OVEN AND THE SOUS VIDE COOKER / co-existence after 29,000 years 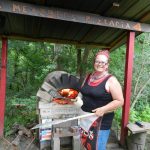 Some 29,000 years ago, give or take a century, someone came up with an idea that set culinary evolution on an important new path. Archeologists can’t tell us who that person was, but for the time being they are pretty sure that’s about when human ingenuity gave birth to the first oven.

As with most things archeological, there’s a high probability this will change when someone finds remnants of an oven that predates that one by a millennium or so. It probably will be someone who is excavating for a swimming pool in the backyard of some suburban home and uncovers an ancient baking chamber with a loaf of bread still in it. In the meantime, we’ll go with the roasting and boiling pits discovered to cook mammoth meat in yurts in Central Europe. At least that’s what Wikipedia tells us.

Once having set foot on this culinary path, cooks and chefs have followed it through cauldrons and fireplaces to many of today’s devices. Yes, a direct line can be drawn from a clay vessel filled with boiling water in a yurt to the sous vide cooker in my son’s kitchen.

For Dawn Metzger of Melrose, WI, that path led elsewhere. She’s the niece of TableTalkatLarrys regular reader Jerry Gschwind. Jerry lives in Honolulu and sent me the video of Dawn’s brave adventure that led to this article.

The You Tube video shows how Dawn built her own mud oven. She was inspired by her friend Pam, who had built a mud oven some years earlier. At a bread making social one day, Dawn said, “Wouldn’t it be fun to build a mud oven down by the creek and have a bread baking party?”

The seed had been planted but it took years to germinate. “I wanted to build my own mud oven using reclaimed and natural materials and I had my own vision of what it would look like,” Dawn explained. “I’ve been ‘green’ my whole life, always recycling and reusing before it became trendy.”

She added, “I began stockpiling materials and researching how to build a mud oven. About eight years after I had the first thought, a neighbor did a landscaping project. He brought us fill that had a lot of clay in it. That’s what spurred me into action.”

The notion of owning a mud oven, earthen oven, cob oven, brick oven, clay oven, or any similar creation was and is far outside my sphere, when I received the You Tube link from Jerry. A search at Bing found 29.8 million listings for “mud oven.” Google showed 2.4 million listings. Most of them fell into the general category of how to build a mud oven or where to buy more traditional ovens. While there doesn’t seem to be anywhere in internetville to buy a mud oven, there were a few listings for brick ovens. They range from small in-home and backyard versions to the large ones used at pizza joints and an occasional steak house. To purchase one comparable to the mud oven Dawn built would set you back between $3,000 and $4,000 and it wouldn’t provide anywhere near the satisfaction and romanticism.

Dawn estimates she spent $100 for the materials to make her oven. “The only things we spent money for were the gray blocks on the bottom, four 4×4s, the food grade cardboard barrel, a layer of fire bricks for the floor and a bale of hay,” she said. “A lot of it was reclaimed material. I got the old bricks from a neighbor’s chimney tear down. Chicken wire was from our old farmhouse chicken pen. The sheet metal roof was siding left over from a friend’s pole building. The sand was from the boat landing and the clay was from my yard and a neighbor’s yard. I collected parts and studied plans for eight years but the actual project took three weeks start to finish. Most of that was to allow dry time between layers of the oven because it had to dry slowly to avoid cracking. I built the actual oven in three days.”

As for maintenance, Dawn says that amounts to repairing cracks after every winter.

Of course, you could write a check and buy a brick oven if you don’t have Dawn’s sense of adventure. Otherwise, you could follow her lead and be able to tell friends and family, “I did it myself,” as you turn out homemade bread, your own pizza, or juicy steaks with a beautiful char?