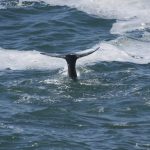 (I shot this photo from an on shore observation deck right on U.S. 101 at Depoe Bay, OR ) –   We’re off again. This time it’s 18 days, starting with six nights on the coast of Oregon before heading for the annual Salmon Days Festival with our son John and his family in Issaquah, WA, and then down through California with a stop in Sacramento for our granddaughter’s seventh birthday.

We’ve set a goal for this trip. Actually, I set the goal: let’s see if we can go the whole way and eat only in locally-owned and operated restaurants, no chains. Jennifer, who by now is accustomed to these kinds of things, said, “OK. But don’t we always do that?”

So far, through the first two days, we’ve made it work if you don’t count breakfast, which usually is something from the “continental breakfast” at the Holiday Inn Express or a bagel and coffee at the closest Starbucks. I don’t count that. But then, I’ve never bought into the “breakfast is the most important meal of the day” business. So, I’ve narrowed the goal to lunches and dinners, and breakfasts only if we have a real breakfast.

You have to love California. In how many states can you spend two full days driving in the same direction and still be in the same state. In those first two days we’ve seen and touched and smelled giant redwood trees and Ponderosa Pines, looked out over the Pacific Ocean, and watched turkey vultures perch on power poles and circle overhead. We’ve seen countless signs warning of some creature with antlers crossing the road in the next few miles, but we haven’t seen a single creature with antlers. These aren’t the typical deer crossing signs with a graphic of a stag leaping. These are just the head of some creature with antlers. Then we also saw signs with the single word ELK. So, I presume the creatures with antlers on the other signs are elk. I wonder often at how the elk, or the deer for that matter, know where they are supposed to cross the road. We did have a deer dash across the highway about 50 yards in front of us. But there was no sign for that.

We spent the first night in Williams, CA – not the Williams near the Grand Canyon. To get there, we drove through the awe-inspiring agricultural heartland of California’s central valley. Most of the grape vines have been picked over and are turning brown in late September. But fresh crops of strawberries have been planted. Remember when strawberries were not a year-round crop, back in the time when they had real strawberry flavor? Some of the almond trees have been picked clean, the nuts on the way to market; some were being harvested as we drove by and others hung thick with nuts that waited their turn. Red apples were visible in huge groves; other trees were hung with green apples. Still young tomato plants were dotted with white buds.

No matter how many times I traverse this valley, I am inspired and amused that a city kid from Brooklyn can identify every crop at 80 miles per hour.

Our commitment to locally-owned and operated restaurants hold up. Lunch the first day was at Harris Ranch on the I-5. Dinner that night was a locally-owned and operated Granzella’s in Williams. Granzella’s is a motel, restaurant, deli and bakery. After a large lunch at Harris Ranch, neither of us was particularly hungry. Jennifer had just a shrimp cocktail and I had a nice bowl of chili with beans.

Day two brought a gem at lunchtime – the Woodrose Café in Garberville, CA. I had a glass of Orange juice that was squeezed after I ordered it and a grilled ham and swiss cheese sandwich. Jennifer had a grilled bacon and swiss sandwich. The restaurant is borderline health food with some vegetarian and vegan items. The owner was in the kitchen and the front-of-the-house staff was tastefully friendly. Dinner that second night in Mckinleyville, CA was at a locally-owned and operated coffee shop, where the food was of adequate coffee shop quality. There were a number of locally-owned Mexican restaurants in town, but Jennifer didn’t feel like Mexican food. There was a locally-owned sushi restaurant that looked very busy as we drove by, but I’m kind of cautious about where I eat sushi.

ON TO DEPOE BAY, OR

Rule #1 – Don’t order steak in a sea food restaurant. It’s probably on the menu as a sop for those in a dinner party who don’t like fish, so the quality of the meat may not be of concern to the restaurant owners.

I broke that rule the other night, but in my own defense, it was with good reason.

We are in Depoe Bay, OR, where you don’t have to go out whale watching because the whales come to you.

Dinner all three nights was at the locally-owned Tidal Rave. First night, I had clam chowder and sautéed shrimp on a bed of polenta and vegetables in a delicate shrimp broth. Jennifer had the rib eye steak special served with bacon laced mashed potatoes and a mélange of vegetables. The steak looked beautiful and Jennifer said it was tender and full of flavor. My shrimp dish also was top notch.

Ordinarily, we would not have gone back to the same restaurant two nights in a row, let alone three nights. However, we looked at the menus for a number of other places in town, decided there were other things on the Tidal Raves menu that were attractive and it was an easy walk from our hotel so we could have a cocktail as well as wine.

The second night, I did a reprise of the clam chowder, but this time I followed with the rib eye as it appeared on the menu. It’s been many years since I had a restaurant rib eye as good as that one. Jennifer had a cup of smoked salmon chowder and an appetizer order of two Dungeness crab cakes.

En route to Depoe Bay, we stopped for lunch at The Crazy Norwegian’s Fish and Chips in Port Orford, OR. It’s a tiny restaurant right on the highway, the kind of place we’ve been seeking in our quest for locally-owned and operated. The menu proclaims “nearly famous clam chowder”, so I started with a cup of that. It was the first of what would become many servings of clam chowder. The menu also announced “cod is my co-pilot” and “trust in cod.” Who could say “no” to that? I ordered the fish and chips. The cod was beautifully white, moist and flakey and the batter was wonderfully light and thin. Jennifer had a bowl of chili and a slice of blackberry and marionberry pie. Then two very satisfied travelers hit the road again.

Depoe Bay bills itself as The Whale Capital of the Oregon coast. They won’t get any argument from us. We checked in to the Inn at Arch Rock and before we went to our room we turned and  looked out the window of the reception area. There was a Pacific Gray Whale shockingly close by in the bay. An adult gray whale can weigh in at 40 tons and measure an average of 45 feet long. To see them in shallow water is highly unusual. At the sighting of that first whale, we went out on the bluff and saw two more. They were feasting on the local shrimp population. Imagine something that size eating a shrimp.

As we sat at the bar at Tidal Wave that first night, Jennifer drinking a mimosa with real orange juice and me with a Maker’s Mark Perfect Manhattan, we saw at least five whales out the window and then were treated to a glorious sunset. The next day we drove The Otter Crest Loop, passed Cape Foulweather and on to Devil’s Punchbowl. The whale sightings were too many to count. While there we stopped in at Mo’s West for lunch. After enjoying an excellent bowl of clam chowder, I asked how much of it they serve in a day. In summer, I was told, it’s about 25 gallons a day, with the record being 36 gallons a few years ago. At this time of year – late September – it runs about four gallons a day.

Depoe Bay boasts “the world’s smallest navigable harbor” at just six acres. To access the harbor, boats cross under the highway. From our vantage point at the state parks observation point next to the bridge, we joined the crowds in a feast of whale viewing. We would see the whale watch tour boats motor out of the harbor and into the ocean. They would chug right on by the whales that were putting on a show for us. People were paying $40 for a 90-minute whale watching trip and we were standing there seeing all the whales you could want and it was free.

Lunch this day was at Gracie’s Sea Hag, where I had another delicious bowl of clam chowder and Jennifer had a shrimp cocktail and a side of French fries. If you’re wondering why I’m the only one eating clam chowder, it’s because Jennifer cannot stand to get sandy grit in her mouth and that’s part of the bargain with any clam chowder. I’m holding up our collective end of the bargain, having had four bowls and a cup in three days.

Next up – Manzanita, OR, not Mexico