CHARCUTERIE, SALUMI, COLD CUTS / unlock the mystery of all those deli meats 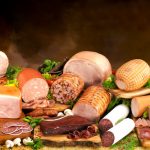 Charcuterie, salumi, cold cuts … call ‘em what you want. They all add up to the same thing – salt-cured, brined, fermented, or otherwise processed meats.

In the U.S. they are served mostly as platters or sandwiches for lunch or dinner. In Italy they are served along with cantaloupe, tomatoes and cheese for breakfast. In France you are most likely to find them on dinner menus as appetizers.

I grew up eating cold cut and home and in Jewish delis. They were salami, pastrami, corned beef, beef tongue, peppered beef, or head cheese.

At Italian sandwich stands we would just ask for a hero – also known as submarine sandwiches, subs, torpedoes, and assorted other names in different parts of the country. We never had to concern ourselves with the names of the various meats that filled those delicious sandwiches. Later in life, I became acquainted with Italian grocery stores and was astounded by the seemingly infinite variety of meats available. My eyes popped when we arrived in the hotel restaurant for breakfast our first night in Rome.

I was reminded of this on a recent visit to Corti Brothers grocery story in Sacramento. It isn’t an Italian store, but the deli department carries about as complete an assortment of top quality Italian meats as one could want. Whenever I visit my son Lloyd and his family, there’s a high probability a Corti Brothers sandwich will be lunch at least once during the stay. Lloyd’s daughter, Alise, won’t eat meat of any kind. Except salami. When I brought home a quarter of a pound each of Hebrew National salami a and dried Italian salami a few months ago, she instantly hugged me and proclaimed “you’re the best grandpa in the world.” She’s six years old.

There’s no possible way to estimate how much of this kind of stuff I’ve eaten in my life. In trying to pin down the primary reason for my quadruple coronary bypass surgery of nine years ago, this part of my diet certainly warrants a place high on the list.

For all this, however, I still have trouble remembering and defining more than just a few of the Italian salumis – a catchall word for processed meats. Mortadella is easy. It’s the large, round, pink meat (pork) that sometimes has pistachio nuts in it. I prefer it without the nuts and if I’m preparing a deli platter for a party, it’s the meat I’m most inclined to nosh and it is an absolute must for your deli platter.

Technically, most Italian meats qualify as sausage in that they are chopped and stuffed into some kind of casing, which often is edible. But whatever the variety, Italian meats have long held a favored place in the palate of Americans. Here’s a guide to help you become familiar with the choices available to you.

SALAMES (Italian spelling) – The variety of salames can appear unlimited. Most common is he Italian dry salame and it should occupy a place on your platter. It’s finely minced pork often used in sandwiches, salads, pastas and antipasti plates. It’s not a bad idea to include a second type of salame for the platter. Ask the deli person for tastes of several and pick the one you like. Toscano style dry is coarsely chopped pork with garlic and white peppercorns. Toscano picante adds cracked chilis and whole peppercorns. Salametti sencha cacciatore is a small diameter salame that originated in Milan. Hot salame is spiced with cracked chilis and cayenne pepper. Salame coto is coarsely chopped pork slow cooked in a steam oven. It’s served cold in sandwiches. Pepperoni is dried pork the a spicy hot flavor, often used as a pizza topping or just a snack.

COPPA – Also known as Dry Coppa. It’s pork shoulder cured in salt brine and rubbed with cayenne pepper and black pepper. It usually is offered as either hot or mild. The hot can be a bit much for the average palate.

SOPRESSATA – Pork with peppercorns and red wine. Usually very spicy. Mostly served for snacking with parmigiana cheese. Limit how much of this you put on your platter.

BEEF TONGUE – Corned, chopped and molded into a loaf. This is a gourmet treat and only occasionally found in commercial delis. It also isn’t very likely to draw much attention on your platter. I particularly like it on a Kaiser roll with yellow mustard. It will be the same whether you get it at an Italian deli or a Jewish deli.

PEPPER LOAF – Very lean pork with a hint of garlic and rolled in coarse black pepper. The meat has a very smooth texture. It’s a good change of pace on the deli platter

GALANTINA – A coarsely chopped pork loaf, flavored with white wine and pistachio nuts and slow cooked in molds. Another texture change of pace, best served with some crusty Italian bread.

HEADCHEESE – A blend of pork head meat, diced and cooked with seasoning and black pepper. It is extremely fatty. Only the most gourmet of you guests will want this, but they will appreciate having it on the platter.

And then there’s the crown jewel of all Italian meats – PROSCIUTTO de PARMA. Prosciutto is dry-cured Italian ham, often sold as Parma Ham. It usually is sliced extremely thin and served uncooked. Any number of regions throughout Italy offer their own versions of prosciutto. Some even is produced in the U.S. But the grand prize goes to Prosciutto de Parma, prosciutto from the Emilia-Romagna region of Italy. This is the meat serves so often with cantaloupe on antipasti plates or as appetizers in fine Italian restaurants and that’s how you’ll want to serve it at your party.

When it comes to Italian sausages, the variety can become daunting. Sausages can be hot, or mild. They can have fennel, or not. But it doesn’t end there. If you are going to serve sausages at your party, they must be kept hot. Serve them slices with tooth picks for picking them up to eat. Best way to serve them is grilled.

SALSICCIA – A mild traditional sausage from Genoa. Prepared with mixed spices and often serve with onions and red peppers.

COTEGHINO – A traditional dinner sausage served with eggplant or lentils. Not really user friendly for a standup buffet. But it’s unusual and would attract some notice. Better serve it with a fork to eat it.

SALSICCINIA – From the Piedmont area. A gourmet treat, often served grilled for breakfast.

SICILIAN SAUSAGE (Hot or mild) – Spiced with cracked chilis, whole fennel seeds and spices. Frequently used to spice up a pizza, or on a crispy roll with peppers and grilled onions. If you are serving sausage, this will be the most familiar and most popular.

CALABRESE SAUSAGE – Obviously, the Calabrian version of this national treasure. Usually a but spicy and wonderful in spaghetti sauce. At a party you are going to want to serve this with a nice red sauce and a fork for eating.

I think you get the idea. There are as many varieties of sausage in Italy as there are regions. The mixture of spices and seasonings may vary. But the all come down to chopped pork in a casing.

There you have it. Much of what you need to select the meats for a platter for a house or office party. And don’t forget some cheeses. I would suggest pieces of cantaloupe, but I’m not very enthusiastic about what’s being grown in the U.S. these days. Of course, you could just go to an Italian deli that stocks imported meats and tell them you want a platter for however many people you are expecting.