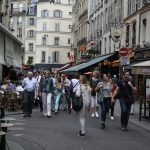 Twenty-four hours and not a single mention of Donald Trump.

We are pleasantly encamped in the Hotel Relais Christine in Paris after an event-free Air France flight from Los Angeles and a harrowing drive into and through the city in Friday afternoon traffic.

I was happy to see that the research funded by several airlines is paying off and there is a marked uptick in the food offerings aloft. In an earlier post, I discussed why it is so difficult to provide flavorful meals in the air and what the airlines were attempting to do to rectify the situation.

For Air France, the culinary consultant is the respected Daniel Boulud. His recommendation, among the five offerings for “hot dishes” was Basque-style chicken. I recalled what I learned in researching that earlier article and that’s what I ordered. I actually was flavorful and enjoyable.

A nap was the first order of business upon arrival at the hotel. Then we plunged into the neighborhood Jennifer and I each recalled from our previous stay. It was 6 p.m. on a Friday and the streets were teeming with locals and tourists in quest of sustenance and any of the uncountable local restaurants. Want Indian food? Japanese? Italian? Greek? French? All plentifully present and most of them eerily familiar from the last time we walked these streets.

The display of shell fish outside Atlas at 11 Rue De Buci was attractive. We asked for a table far inside to avoid the pall of cigarette smoke that hung over the outdoor dining area. After asking for a half-liter of sauvignon blanc, Jennifer ordered an assortment of shrimp, welks and Spanish mussels. I ordered half dozen “Burgundy snails XXL” and a platter of Normandy lobster, crab, shrimp, four different kinds of oysters, and mussels.

What was set before us was prodigious. First, the snails were the largest I’ve ever seen and they were delicious. Then we tackled the shell fish with unbridled delight. It was a lot of food, a very lot of food. But we hadn’t eaten since breakfast and we polished off the who bunch of it. The mussels were raw, a first for each of us. Jennifer downed a few and decided they weren’t for her. So, I assumed responsibility for the lot of them and passed some of the lobster and crab her way.

Stuffed. Sure. But the dessert tray included a lovely, individual-size tarlatan for me and a napoleon for Jennifer. That and some lovely espresso and we were done.

The only thing left was to congratulate ourselves and each other for having gotten together 50 years ago and stayed together this long. How awful, we said, if we had gotten together with people who didn’t like to eat this way.

Not possible, I said.