AN AMERICAN ABROAD AT A STRANGE TIME – Part seven / it took 18 years, but we’re back 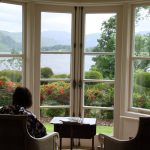 It was 18 years ago – 1999 – near the end of a magical five-week drive through England, Scotland and Wales. We had visited many of the sites of the Arthurian legend, stayed at manor houses and castles, dined with some of the finest chefs in England at a time when manor houses and castles were competing to lure chefs away from each other. Every time we stopped at a new place, I had to teach the bartender how to make a perfect Manhattan as we relaxed in the solon before dinner. It was quite a posh life.

One the way south, we needed a place to breakup what otherwise would have been a long drive. Our travel agent had booked us into the Sharrow Bay Country House on Lake Ullswater in the Lake District of England. We were enchanted. The setting on the shore of the lake was beautiful. Emerald green hills rose from the lakeside and were reflected in the rippling water. And we would long remember the restaurant, with its views of the lake and magnificent food.

After dinner, Jennifer retired to our room and I went to the conservancy to relax. The only other people there were a British couple. The man sat at the piano and played songs from the war years. When he began to play “The White Cliffs of Dover”, they fumbled with the words. I started to sing along and they followed my lead – an American on vacation teaching two Brits the words to one of their nation’s best-loved songs.

The next morning, we were on our way. But we vowed to return someday. That day was Thursday.

It was cold, windy, and rainy when we arrived, not untypical for this region. From our room we watched the changing weather on the lake and surrounding hillsides. Then, umbrellas aloft, we made our way to the restaurant.

We were seated first in the lounge. We each ordered a glass of prosecco and through the picture window we counted the sail boats anchored by the other shore. We were served two amuse bouche – a cheese puff and a fish cake. Then the captain came and took our orders for dinner and wine.

Soon, we were summoned to the restaurant. Our alcove table for two provided a view of the lake. The rain stopped and hints of sun broke through. Jennifer was convinced there had to be a rainbow, but she couldn’t find it.

Dinner was served at a leisurely pace. For me it was a starter of roasted quail leg and breast with a quail egg, mushroom puree and enoki mushrooms fried to a crisp. Then it was a magnificent breast of Gressingham duck, bred and raised in a small village in Lancashire in the far north of England. The duck was served with spiced carrots, shallots, roasted lemon and thyme and a Madeira sauce. I finished with a soufflé of St. Clements citrus and a lemongrass ice cream. All this was accompanied by a very good bottle of Barolo. It was a meal for the ages.

Jennifer skipped a starter course. For her main she had Herdwick lamb, herb crusted with sweetbread black pudding, fried black kale and Roskoff onion confit. Turns out it wasn’t really lamb, but rather something call hogget. The captain explained that while lamb is sheep in the first year of life, hogget is sheep in its second year, after it has had a chance to feed on grass for a longer time and develop a stronger flavor. After the second year, it becomes mutton. For dessert Jennifer had a decadent chocolate infusion, three different chocolate offerings comprised of dark, milk and white chocolate with accents of cherry, caramel and hazelnut.

Jennifer raved about the flavor of every bite of the lamb and I resolved to have it the next night. Our tastes in lamb are nearly identical.

For night two I ordered seared duck foie gras with roasted figs and buttered spinach as a starter, then the lamb. At the first bite, Jennifer looked at my face a knew something was amiss. “The texture,” I said, “it’s mealy.”

“I thought of that this afternoon and meant to mention it,” she answered.

Too bad. I thought from her reaction the first night, that I was onto something with this hogget business. I was going to preach hogget to all the chefs at restaurants in L.A. But I changed my mind. The flavor was nice, but not at all as wonderful to me as it had been for Jennifer. The texture, however, spoiled it.

Be that as it may, our stay here has been wonderful, well worth the 18-year wait. We spent four hours on a lake yesterday aboard the Lake Ullswater Steamer, which actually is diesel powered. It was very cold and windy, but I got some nice photos. Today dawned bright and sunny with predictions of record heat throughout the England. Jennifer drove us to the nearby village of Pooley Bridge, where we strolled the shops, came across a town craft sale, bought some gifts to take home. In places, the road was not wide enough for two cars. It was at those places where we were most likely to encounter oncoming traffic. Jennifer and the other drivers managed enough social interaction to avoid damage to anyone’s car.

We’re going to skip dinner tonight. Instead, at 4 p.m. we will engage in one of those most civilized of British customs – afternoon tea. It will be finger sandwiches, scones with cream and jam, assorted pastries and tea. I’m sure there are people who will do that and then return three or four hours later for dinner. Not us.

Tomorrow we will overnight back at Stratford-Upon-Avon. Then it will be on to London, where the massive apartment fire and resultant deaths has left a glumness over the city.

(The photo with this feature is the view from our room at the Sharrow Bay Country House. That’s Jennifer in the lower left corner.)

NOTE: You can read all seven parts of this series here.