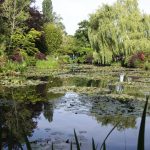 Behind us, the coastline of France. With us, the memories of a wonderful and adventuresome week. Ahead, not yet in view, the White Cliffs of Dover, England.

As the ferry sets off across the English Channel, we take with us the feeling of warmth and welcome of the French people who hosted us for a week and for their sometimes funny, idiosyncratic and challenging ways.

This would have been a very different trip if Emmanuel Macron had not won the French Presidential election. Had the French people elected instead the holocaust-denying far right candidate, there would have been a dark cloud over us this vacation and I would be leaving with the thought that I might never return to France. But Macron won, the far right was rejected by an overwhelming majority and I could look our French hosts in the eye with admiration and joy.

In our entire week in France there was only one mention of Donald Trump. That came in the context of our tour guide at the Normandy beaches discussing Hitler’s rise to power. She likened Hitler’s demagogic manipulation of the 1930s to Trump’s bellicose rhetoric in 2016. I was surprised we didn’t hear more commentary about the role of America in the world today and face more questions about what has happened to the American people.

This trip, so far, has been proof that if you keep going life will continue to serve up new discoveries and thrills. Certainly, the time we spent at the Normandy beaches on the anniversary of D-Day was life-altering. (You can read about that day in Part Four of this series.) The moment, when I walked through the gate at Monet’s Water Garden in Giverny, stood on the bridge and looked at the scene as he had painted it, was breath-taking. I rank it with my first glimpse of the Statue of David, my first look at The Old Course at St. Andrews, my first visit to Teatro La Scala in Milan and my time spent looking into the eyes of the Mona Lisa. All indelibly etched in my memory.

Dinner on our last night in France brought another first. At the restaurant Sole Meunier, I ordered the signature dish, sole sautéed in a lemon butter sauce. A spoiled American, I was surprised when I was served a whole fish, with only the head removed. “The biggest sole in the city,” the French waiter said as he set the plate in front of me.

I had no choice. I was about to fillet a whole fish on my own, just as I’ve seen it done by waiters and by Jacque Pepin on television. With a fish knife and a fork I set to work and swelled with fascination and satisfaction as I quickly dispatched every bone in that fish. I had extracted four perfect fillets. Not one bone left to enter my mouth; the skeleton sitting across the far end of the plate; the edge bones carefully piled to the side. I think this was the best meal I had during the French leg of this trip, and not just because it was my first fillet. The fish itself was delicious and the potatoes served with it were heavenly. For a first course I had escargot in a garlic-butter sauce with flakey pastry. For dessert I ordered strawberries with a very light lemon sauce and I topped it all off with an espresso.

On the other hand, France is a land where street signs seem to be optional. You can drive for blocks in a city and not see as sign to tell you where you are. That can make it difficult to find your hotel. Even the GPS in the rental car found this confusing. Twice we had to phone the hotel to ask for directions because the GPS and one-way streets were having an argument and both times I was not able to tell the hotel where we were because there were no street signs.

This was the first time we ventured outside of Paris and away from the restaurants of the great chefs of France. What we found is that restaurants in the rest of the county are no different than they are in most of the U.S. – no better, no worse. In Giverny and Bayeux we asked the hotel staff for recommendations and made reservations ahead of time. I’m sure they suggested the better places in each city. The restaurants were fine – not great, but fine. I guess as an American I was inclined to associate French food with fine dining. Silly mistake. The food in any restaurant in the world is as good as the owner wants it to be and the chef is capable of delivering.

Foie gras in France means paté, never the sautéed piece of liver that sometimes is served in the states. In the U.S. it will only be duck liver. But in France it might be either duck or goose, depending upon the restaurant. To have goose foie gras again after all these decades was a welcomed treat.

Butter in France is unlike any commercial butter in the U.S. I never eat butter at home. I can’t stop eating it here. Breads in France will ruin a person who must then return to the U.S. and eat what is produced there and French cheeses are extraordinary.

Not being able to speak French is not fatal. Even locals who speak no English can make themselves understood with hand gestures if the English speaking person is patient and really wants to understand. Same is true in reverse. If you speak no French and you are willing to use gestures and speak slowly, you will be understood. Really, they want to understand and be understood. Speaking of speaking French, Jennifer’s old school-girl French began to return after we had been here a few days. On the way to the ferry terminal this morning, she asked the taxi driver how he was feeling and she did it in flawless French.

(The photo with this feature is the Water Lilies scene at Monet’s Water Garden in Giverny. France. This is the approximate view from which he painted is wonderful piece.)

(NOTE: You can read the previous four features in this series here.)