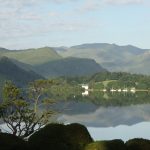 Well, that was a morning to remember. I awoke to find Jennifer sitting in the alcove of our room at the Sharrow Bay Country House on Lake Ullswater in the Lake District of England. The drapes open wide and she was reading.

“Look at the view,” she said in a tone that got me out of bed without a moment to even stretch.

The sun had risen behind us and was bouncing a reflection off the hills on the other side of the lake. The water itself was still, like a mirror grabbing onto the images. Swallows had left their nests under the eaves of the building that housed our room. They were darting everywhere, feeding in flight on the midges that danced in the air. Who would want to leave this?

This far north, the last glow of daylight lingers until about 10 p.m. By 3 a.m. morning has made it light enough to see the boats anchored across the lake. Five hours of darkness, that’s all there is just three days before the longest day of the year.

But it was time to go. Our three days in this magic place had come to an end and London awaited after a one-night stopover in Stratford-Upon-Avon to break up the drive. The GPS said the drive would be a shade longer than three hours. Six hours later, we parked behind the Shakespeare Hotel in S-Upon-A.

We hadn’t gone very far – maybe 45 minutes – when the GPS lady told us she was revising the route because of congestion ahead. Jennifer left the decision to her navigator – listen to the GPS lady or follow the Collins Road Guide. Strangely, I had developed more confidence in the GPS lady than I ordinally would invest in a piece of technology.

“Get off at the next exit and we’ll follow her directions,” I said.

You know what’s wrong with this whole scenario? Everyone else driving on the M6 on Fathers’ Day had a GPS of their own. We all got the same advisory. We all got off at the same exit and thousands of us tried to fit onto the two-lane roads through the tiny villages that parallel the M6. At the same time, the northbound traffic was receiving the same GPS messages. Buses, trucks, vans, campers and autos of all sizes were navigating village roads lined with vehicles parked on both sides. Traffic signals in these ordinarily sleepy villages compounded the situation. It took us a bit more than one hour to travel a distance that would have taken about 10 minutes on the M6.

Along the way, I asked Jennifer, “Wonder what would have happened if we stayed on the highway with all those people who have no GPS.”

We speculated that it looked as if something really serious had shut down both sides of this major north-south artery. Later we learned there was a collision – called an “incident” on the highway advisory signs – between a car and a lorry (truck) in the northbound lanes. Southbound lanes were closed for a time to land an air ambulance.

When finally we rejoined the highway, Jennifer pointed to the Range Rover in front of us and said, “That’s the same car that was just ahead of us when we got off the highway.”

By now, Jennifer was a tense bundle of nerves and I was on the border of car sickness. We saw the northbound lanes jammed solid for miles and decided to get south of the whole mess before pulling off at a “services layby,” where she had a Starbuck’s latte, a chocolate chip cookie and a berry yogurt. I sipped tonic water with quinine, a great stomach settler.

The road was crowded the rest of the way, with intermittent slowdowns. By the time we reached our hotel room, we each wanted to collapse in a heap.

Then came dinner. I couldn’t recall what time I made the reservation at The Garrick Inn, so I phoned them. They had no such reservation and were fully booked with tour bus groups. They couldn’t understand why their computer system accepted my reservation and confirmed it because these groups had been booked for months. When we tried to eat at this place five days ago, during our first stop at S-Upon-A, we were told bus groups had the place fully booked.

We wanted to eat at The Garrick Inn because it’s the oldest pub in the city, a timber-framed building that dates back to the 1400s. But Jennifer pointed out as we walked to a different pub, “In my experience, places that cater to bus groups don’t serve very good food.”

Smart lady. We trooped around the corner from our hotel to The Golden Bee and ordered a shandy (beer and 7-up) for Jennifer, a pint of Stella Artois for me and two fish and chip dinners with chips (French fries) and mushy peas. They were out of fish for the fish and chips. That has to be a first in the history of England.

As we took a stroll after dinner, I couldn’t help but think of the swallows flitting through the Lake District morning, the reflections on the lake, and the quite alcove that protected us from the real world. Tomorrow morning, it’s on to London, where the real world awaits us. Just a different kind of real world.

The photo with this feature is the early morning view from our hotel room at Lake Ullswater.

(NOTE: You can read all the features in this series here.)