A CULINARY CORRIDOR / places to chow down along Interstate 5 between L.A. and Seattle 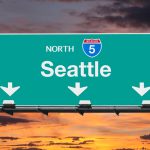 For starters, you are dead certain the food at most of the places you will see, even the ones that look like they might be acceptable, is going to range between poor and mediocre. And that doesn’t count the fast food joints that dot the landscape. Even the chain coffee shops are not risk free.

Applebee’s? Denny’s? Shari’s? Red Lobster? Olive Garden? IHOP? Outback Steakhouse? The Cheesecake Factory? P.F. Chang’s? Bob’s Big Boy? You pretty much know in advance what you will get at most of these places – the same thing you got the last time you stopped at one in the same chain. In our meanderings across the U.S., we’ve eaten at least once at each of the places named above. In some cases, once was enough. Or too much. There are others at which we’ll pay a repeat visit if we don’t spot something that looks locally unique and inviting.

In most towns you’re likely to spot some independent local restaurants. These can be a real crapshoot. But sometimes they can pay off big time. Often, you can tell by the line waiting to get in or by the crowd inside the place. Of course, that also could be the result of it being the only half way decent place in town, or an indication of a local taste bud deficiency.

Jennifer and I have done a whole lot of stopping at take-a-chance places as we piled up miles wandering around the U.S. Several years ago, we did a five-week driving trip from Los Angeles to Key West and back. Another time, we did a three-week drive through eastern Canada and New England after the graduation of our son John at U-Mass Amherst. A few of years ago, we drove up the east coast from South Florida to Philadelphia because I wanted to be at Chesapeake Bay for the start of the soft shell crab season and at Coney Island for the re-opening of Nathan’s Famous Hot Dogs after Hurricane Sandy.

A friend once said that if there was a good restaurant within 100 miles, Jennifer and I would find it. The experiences of the journeys described above and others tend to prove the accuracy of that statement. In Tallahassee, FL and Childress, TX we plucked true gems out of seemingly nowhere. Same was true at the Outer Banks, Montreal, Ketchum, and too many other places to recount. We passed up some nifty looking lobster restaurants in and around Kennebunkport before we stumbled upon Nunan’s Lobster Hut the first time.

I wish I could tell you there’s some secret to how we do it, some mysterious formula that I could pass along. But there is none. You could try recommendations by reservation clerks who check you into your Holiday Inn Express, Hilton Garden, or Motel 6. But talk about a crapshoot that will come up snake eyes with a frequency that would evoke jealousy from a Vegas casino owner. For those of us of some vintage, the recommendation of someone who is impressed by restaurants that have table clothes is not going to cut it.

So, what to do? You’ve spent six or seven hours on the road. Lunch was a quick stop at one of those coffee shops. Now you’ve settle in at a hotel or motel. What you want most is to relax over a nice drink before you open the menu. Then you want a good to excellent meal with a decent glass of wine. That’s a tough assignment for a stranger, even in a good size city. In much of the nation it can be beyond reach.

What it all comes down to instinct and luck. With practice you might well be able to do it too. I guess it starts by eliminating those places that look ordinary. At the ones that seem possibly worth a try, look at a menu for hints of attention to detail and style. It’s not so much what is on offer as how it is described – are there items that hint of something special. We found a truly extraordinary French restaurant in California’s gold country by browsing through a folder of menus in the lobby of our hotel. Some of the offerings seemed unusual for the area – things like escargot imported from Burgundy. You may pass over some perfectly wonderful places this way. But in time you’ll develop your own instincts. And that’s what’s most important, because, after all, you are looking for places that you will like and it doesn’t matter whether or not I would like the same place.

Of all our travels, the route we’ve driven the most is Interstate 5 between Los Angeles and Seattle. We live in L.A. Our son John and his family live just outside of Seattle. We’ve probably made the roundtrip 40 or 50 times. (During the winter we fly to avoid the risk of snow in Northern California and Southern Oregon.) Our other son, Lloyd, and his family live in Sacramento, also on the I-5.

I couldn’t begin to guess how many different restaurants we tried along that route in the last 13 years. Some earlier favorites later changed menus or owners and fell from our list. Others we’ve discovered on recent trips. A new one joined the list just this year. Here, to get you started from south to north along this route, are some of the places we recommend with no hesitation.

THE RANCH HOUSE RESTAURANT, GORMAN, CA – It’s barely an hour up the road from home and kind of early in the trip to be making a stop. But if you leave early, with the thought of having breakfast on the road, this is a winner. It’s owned by Sizzler, but the food is cooked to order and there isn’t a buffet counter in sight.

TACO TRUCK, I-5 at the Buttonwillow Exit (next to the Chevron station) At the junction with State Route 58 – 26 miles west of Bakersfield – If you left home a little later, after breakfast at home, and you want a lunch stop, this is authentic Mexican street food served from a truck that never moves. Or if you are southbound and want dinner before you get home …

HARRIS RANCH INN AND RESTAURANT, COALINGA, CA – This is where we stop for lunch on most of our trips north. It’s half way between home and Sacramento, two and one-half hours north of the San Fernando Valley. The location and the food add up to a restaurant that is always crowded, but moves people through in good order.

TIMBER’S STEAKHOUSE, CORNING, CA at the Rolling Hills Casino – A solid menu, anchored by beef and rib entrees, in a pleasant setting. Also nice salads and pasta dishes. There are a number of fish offerings on the menu, but I’ve never tried any of them. Enter through the south door of the casino for the most smoke-free route to the restaurant. Open for dinner only. Closed Monday and Tuesday.

PURPLE PLUM, YREKA, CA – A local coffee shop with traditional coffee shop offerings. It’s a frequent lunch stop for us when headed north – just the right time and distance from our overnight stop at Corning.

DEBBY’S DINER, MEDFORD, OR – Heavily reminiscent of a 1950s diner without the juke boxes on the tables. A great place for a burger and real, old-fashioned malt. The rest of the menu is typical diner food, with the quality you won’t find at a chain. Breakfast and lunch every day; no dinner on Sunday or Monday.

K-BAR STEAKHOUSE, CANYONVILLE, OR at the Seven Feathers Casino – Great location when heading south, but a bit too far south for a northbound stop. A really nice, eclectic and extensive menu. Good beef dishes and local Oregon lamb and Columbia River salmon in season. Opened for dinner only. Closed Monday and Tuesday.

LOS 3 REALES, CORVALLIS, OR – An accidental find during the one and only time we stopped in Corvallis. The only room we could find during graduation week in central Oregon was a mile from the University of Oregon. Go figure. It was at a Holiday Inn and we had a second floor room with a river view. I had an urge for Mexican food; we didn’t want to drive to dinner; and this restaurant was across the street from the hotel. I had one of the best carne asada dinners I’ve ever eaten. Jennifer said her burrito was excellent. People at a nearby table raved about the Pollo a la crema. It’s a bit off the I-5, but we will return.

ISSAQUAH CAFÉ, ISSAQUAH, WA – Issaquah is a small city about 20 minutes southeast of Seattle. And, no, it is not on the I-5. It’s where son John and family actually live. Issaquah Café is where I love to go for breakfast when we are in town. I’m partial to the old-style thin buttermilk waffles, which they serve here. The maple syrup is the real, thin stuff brought west from Vermont, not the thickened commercial stuff served at most restaurants. And the patty sausages are a great accompaniment.

MONTALCINO RISTORANTE ITALIANO, ISSAQUAH, WA – This small gem rivals the finest Italian restaurants anywhere. The owners are from Montalcino, Italy, and they brought the recipes with them. The star of the wine list is imported from the owner’s winery “back home.” Reservations are a must any night of the week. We’ve been there many times, ordered many different antipasti, pastas and entrees. Even if you are staying in Seattle, it’s worth a trip to Issaquah for dinner here.

THE BROOKLYN SEAFOOD, STEAK AND OYSTER HOUSE, SEATTLE, WA – How about 19 different types of oysters at the raw bar. Steaks and chops cooked on a flame grill. Fresh local and Alaskan sea food. I generally avoid restaurants that can’t decide if they are a seafood house or a steak house. I make an exception for The Brooklyn.