WHO’S CRAZIER, DONALD TRUMP OR THE FARMERS WHO SUPPORT HIM? 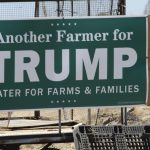 Suppose a candidate for public office told you that your biggest problem didn’t really exist and you knew he was either misinformed or lying.

Suppose that same candidate promised that if elected he would do something to give you an even bigger problem.

If you decided to support that candidate and urge others to join you would you be:

A. Stupid
B. Suicidal
C. Brain dead
D. A farmer in California’s central valley
E. All of the above?

I’ve traveled up and down Interstate 5 through the agricultural rich central valley of California hundreds of times since 1965. From the window of my car, at 80 miles per hour, I can recognize just about every crop growing on either side of the highway. I find California’s agriculture awe-inspiring.

So it was no small surprise, when one recent day I spotted something new growing alongside the walnut and almond trees, something I never had seen before in all those many trips. There, amid the fields of corn and rows of tomatoes, grew signs proclaiming:

Another Farmer for
TRUMP
Water for farms & families

My first thought was “are they nuts?” Then I realized: “yes, they are. I’ve known that for years.”

These are people who produce the produce that feeds much of the world. These farmers grow more than 450 different crops. They grow more than 99% of the world’s supply of almonds, artichokes, dates, figs, kiwifruit, persimmons, pomegranates, pistachios, prunes, raisins and walnuts. They produce more cantaloupes than the next four states combined, 86% of the lemons, 80% of the olives and 90% of the wine produced in the U.S., as well as 83% of the nation’s strawberry crop and 94% of the processed tomatoes. They lead the nation in production of alfalfa hay, grapes, peaches, asparagus, broccoli, cabbage, carrots, cauliflower, celery, garlic, lettuce, honeydew, onions, bell peppers, spinach, apricots, raspberries, nectarines, and tangerines. And they do all that in what is essentially a desert.

But when it comes to knowing on which side of their political bread the butter is spread, at least a representative sample of these agricultural geniuses seem to suffer from brain flatulence. And they have no shame about public displays of their ignorance. By now must it must be viewed as a chronic ailment for which there is no apparent cure.

These farmers are suffering through a stifling drought that now is in its fifth year. Some of their fields lie fallow; their water allotments have been reduced; they are drilling their wells deeper and deeper in the quest for water. Water tables are depleted to the point where the ground is sinking. Aquifers have been drained to dangerous levels to water crops and there has not been sufficient rain or snow melt to replenish them.

In the face of all that, Presidential candidate Donald Trump took his campaign to the valley and proclaimed “there is no drought.” http://www.usatoday.com/story/news/politics/onpolitics/2016/05/28/donald-trump-tells-californians-there-no-drought/85082174/

That’s right. Trump told these farmers that their biggest problem doesn’t exist. And what do these farmers do in response, these farmers, who know better than anyone that the drought is real? They erect signs supporting Trump for President.

Way to go, you blockheads. Who’s crazier, the guy who says the drought doesn’t exist or the wackadoodles who support him? Let’s call it a tie.

But there’s a way to break the tie and determine that the farmers are the winner.

Trump has said from the beginning of his campaign that he wants to deport the people who make up the primary work force for these farms. The people who plant, tend and harvest the crops – he wants to send the packing – not packing crops for market but packing suitcases for the trip “back to where they came from.”

Have these farmers been standing in the sun too long? Has the dust from the parched land filled their heads and sand blasted their brains? Are they too stupid to realize the consequences of Trump’s nutty plan?  Do they think they’ll just follow their workers and move their farms south of the border? But Trump has a plan for that too. Tariffs. That’s what he wants to use to pay for his wall. Tariffs that would drive up the cost of food and pretty much put today’s California farmers out of business.

Since they seem too dense to figure it out for themselves, let me spell out some things for them:

In a feature published here a couple of years ago, we reported that an Alabama tomato farmer told the Associated Press only eight of her expected 48 field hands showed up to pick the crop after the state passed anti-immigrant legislation.

Trump’s promise would deport those eight along with the rest of them and leave that entire tomato crop to rot in the field, assuming the famer could find someone to plant the crop in the first place. California is the nation’s number one producer of tomatoes. Wipe out the crop and there will be plenty of fallow land on which to plant Trump for President signs, although I doubt there’s much cash in the sign crop.

A survey of Georgia farmers a few years ago found more than 11,000 jobs going unfilled as workers left the state in the wake of passage of anti-immigrant legislation. The president of the Georgia Agribusiness Council estimated the revenues lost to the state’s farmers could top $1 billion and could spiral out of control. The state’s response was to attempt to recruit probationers for the jobs. But the president of the Georgia Fruit and Vegetable Growers Assn. said most of the probationers quit after just one day, with many leaving after 30 minutes because the work was so difficult.

Tom Nassif, president of Western Growers Association, said of the anti-immigrant legislation passing in state after state, “America could lose its domestic supply of fresh produce and accelerate the flight of farming to Mexico and beyond” as a result of the anti-immigrant fervor. “For every farm worker job that goes, an additional two to three off-farm jobs in related industries go with it,” he added.

It’s sheer lunacy. But it certainly isn’t new. California agriculture often seems to have dust where its brain should be.

For years, drivers along Interstate 5 have been confronted with signs that read:
“Stop the Costa, Pelosi, Boxer Dust Bowl” as in Congressmembers Jim Costa and Nancy Pelosi and U.S. Senator Barbara Boxer
“Stop the Democrat Created Dust Bowl” with the same accompanying three names in a circle with a line through them
“Tell Feinstein (U.S. Senator Dianne) to Vote for the Water Bill”

Notice a pattern? Blame the Democrats. All the named elected officials are Democrats and the only political party named is the Democrat (sic) party.

If one didn’t know better one might assume no Republican ever was elected to represent these areas in Congress. But we do know better. Virtually every person who has represented the Central Valley in congress for eternity has been a Republican. It’s those Republicans have done nothing to solve the problems about which these farmers complain.

Come on folks. Republicans have been the majority party in the House of Representatives in 15 of the last 19 years. And through all those years your own locally-elected Republican congressmembers haven’t fixed your problems. So, why are fingers pointing at Democratic elected officials? Did you geniuses ever think of turning to your local Republican representatives and asking, “Why the hell should we support you any longer.” Haven’t those elected officials proven to be either unresponsive or ineffective? Shouldn’t those be the names on those roadside signs? Aren’t those the people who really need to be replaced? Instead, these suicidal farmers seem to have concluded the answer to their problems is Donald Trump, the guy who denies the problem even exists and has a plan to make things worse.

What becomes apparent out of all this is that the answer is “yes,” some of California’s farmers actually are crazier than Donald Trump.