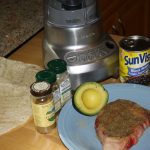 The article described it as a hand-made corn tortilla covered with a black bean sauce that gained a flavor boost from avocado leafs harvested from trees grown in the area of Oaxaca. It said the leafs imparted a flavor of black licorice.

The author described the dish as simple and satisfying and said it looked like a smudge on a plate. It’s called enfrijoladas and it sounded delicious. But where was I to get those rare avocado leafs.

I read the article while eating a burger with Swiss cheese at Barney’s Gourmet Burgers in Sherman Oaks, CA, right across the street from my office. My dinner plans switched in an instant. I was going to make my own version of this instead of either of the two fish dinners I had been contemplating.

I was going to use flour tortillas because we like them better than corn tortillas. They would be store-bought, not hand made. And I certainly didn’t have any avocado leafs, Oaxacan or otherwise. I would get the licorice flavor from star anise.

The Food Network website describes enfrijoladas as a tortilla, bean and cheese casserole. Rick Bayless dresses his up with chorizo, onion, salsa, and one of three different cheeses. I didn’t learn of this until I went online after Jennifer and I swooned over my own version, which didn’t include cheese. Here’s the recipe for my own version, which I served that night and a couple of times since.

Mix the dry rub ingredients together. Pat the dry rub onto both sides of the steak. Refrigerate for at least one hour.

Drain the liquid from the beans, reserving the liquid. Puree the beans in a blender, adding as much of the liquid as necessary to aid the process. Crush the star anise with a mortar and pestle and add them to the beans. Puree again to incorporate the star anise. Pour the puree into a sauce pan and bring to a very slow boil. Add more of the reserved bean liquid if the beans start to get too dry. Taste the heated bean puree and add the salt.

Remove the steak from the refrigerator one-half hour before you are ready to grill it.

Bring a cast iron grill or grill pan to very high heat on the stove top. When the pan begins to smoke slightly, put the steak in the middle and grill for four minutes if the steak is fairly thin, longer if the steak is thicker. Turn the steak and grill until medium rare, about three to 5 minutes longer depending upon the thickness of the steak. Remove the steak to a carving board; cover tightly with tin foil and let the steak rest for five minutes if thin, ten minutes of thicker.

One minute before the steak is finished resting, heat the tortillas.

To assemble: carve the steak into slices about one-half inch thick. Spread the bean puree on the tortillas. Lay the steak slices on top of the beans. Place a slice of avocado on either side of the steak.