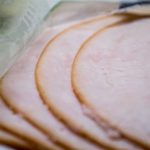 Any way you slice it, they’re all the same.

That’s how I regarded processed deli meats. To me, they all share similar unsavory traits – like salt, preservatives, nitrites and other questionable additives.

But Oscar Mayer set out a while ago to prove me wrong – starting with the “slice it” part.

They spent years developing a machine to make their Carving Board turkey look hand-sliced, not extruded. Their eventual answer: replace industrial slicers with industrial hackers. Then add caramel color to the edges of the hunks to heighten the right-off-the-bird optical effect.

Unlike the bird itself, this idea did fly. The revamped turkey slabs looked and sold better.

But wouldn’t the health-conscious consumer still be skeptical of packaged turkey, no matter how unpackaged it appeared?

Oscar Mayer counters in their TV ads: “Finally something that’s not too good to be true. Oscar Mayer natural turkey breast.”

So maybe my reservations are shaky. Oscar Mayer has made its meat-slicing reforms. Maybe now their turkey is as good for you as the real thing? Maybe not all processed turkey-makers are birds of a feather?

Sounds very unprocessed food like. So far, their meat seems as real as their claims.

That’s it? No nitrites. No preservatives. No nothing except a few incongruous items that seem healthy enough – potatoes, cherries, celery and a little sugar.

And for almost every American shopper, especially those in a hurry, on tight budgets or simply seeking convenience, that ingredient list will be enough to convince them. Like Oscar Mayer says in another turkey ad: “Just like the holidays…without all the hassle.”

But I can’t just quit my prejudices cold turkey. So I combed the web to learn more about the fruit and vegetables listed in Oscar Mayer’s natural turkey. Are they just nutritious flavor-enhancers or something else? Or in a larger sense, could it be that food processors are catering to natural food enthusiasts by making healthier products? Or are they using new label-friendly terminology to mask the on-going presence of preservatives and other chemicals shoppers are increasingly looking to avoid?

I ran into hundreds of web-borne opinions on the subject. Some angry. Some ironic. Some manufacturer hype. Some government definitions. All stated as fact. What follows comes from the ones that seemed most logical and unbiased to me. In short, the ones I chose to believe.

Here’s a closer look at the “clean label” ingredients – the ones listed by Oscar Mayer as well as other processed food makers whose products are in your local market.

“Natural flavor.” A logical ingredient for natural turkey. Sounds like a wholesome change from the typical over-processed, food-engineered, chemically-flavored stuff.

But senior scientist David Andrews of the Environmental Working Groups (EWG) says “natural flavor” is actually the fourth most common ingredient among 80,000 foods they tested for the degree of nutrition, ingredient concerns and processing concerns –  trailing only salt, water and sugar.

“Overall, thousands of flavor chemicals are being added to foods without FDA oversight or review of the available safety information or the concentration used. The food additive review system is broken.”

That’s a lot of things not normally associated with turkey, much less Mother Nature, added in the lab to replace flavors that food processing has destroyed. And most sound a lot less wholesome than the words “natural flavor” found on a clean label.

Any way you slice it, most shoppers would be less eager to buy any packaged food that says, “may contain aldehydes, acetates or butyrates” in its ingredient list – which is why the term “natural flavor” is naturally favored by the industry.

Celery goes in turkey stuffing. But when you think celery juice, think nitrates and nitrites, two of the evil-doers of processed foods that can create the nitrosamines associated with cancer. Celery juice is not a nitrate/nitrite substitute. It’s an alternate source of the same thing. But because it is a “natural” form of the chemical, it shows up on the label as juice.

A cultured dextrose maker bills its product as “the next generation of clean-label antimicrobial hurdles for prepared meals” which “the FDA has agreed may be labeled on finished food products as cultured dextrose rather than all its different components.”

Got it? May be labeled something other than “preservative.” Though it is one. In a meat product trumpeting “no artificial preservatives.”

Cherry powder: not a fountain drink base. It’s another nitrate-containing curing agent.

Potato starch products are essential in the food, adhesives and textile industries – but not in mashed potatoes and gravy (unless yours tastes like wall paper paste). In this case, it’s a moisture binder.

All of the ingredients discussed above are in Oscar Mayer’s natural turkey product. Doesn’t mean it’s good or bad for you. But by marketing it as “finally something that’s too good to be true,” they raise questions.

Is natural turkey a natural choice if it uses natural chemicals to replace artificial ones? Is eating nitrate/nitrite-laden preservatives in your meat actually better if they come from plants instead of test tubes – especially if they’re the same chemicals?

These and many similar debates will intensify as the $390 billion processed food industry and their alchemists continue working to replace the ugly words on their ingredient list with clean-label alternatives, and we ask: does cleaner-sounding always mean cleaner?

(NOTE: In publishing this article we do not intend to pick on Oscar Mayer. The references to the labeling of this product is intended to represent what appears to be an industry-wide practice.)