WHAT DO YOU DO WITH A BOUNTY OF LEFTOVER BAKED HAM? / you make an old recipe better 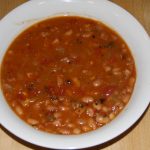 Nine pounds of shank end ham sounds kind of excessive for two people. That’s because it is excessive.

But I didn’t have much choice. My new Jacques Pepin cookbook – HEART AND SOUL IN THE KITCHEN – has a very inviting recipe for glazed ham. I was committed to preparing it for our dinner and the smallest shank end I could find was nine pounds.

I’d never baked a ham before. I’ve eaten it at other people’s homes and always enjoyed it. And, after all, this was Jacques Pepin.

Pepin’s recipe calls for a six-pound shank half of a cured smoked ham. The woman standing next to me in the meat department told me ham freezes well. So, I went for it. And for one of the few times in my life I followed the recipe with no deviations.

The result was a gloriously glazed ham drizzled with maple syrup sitting proudly on my cutting board.

We had a wonderful ham dinner that night – ham with a sweet potato for me and a yam for Jennifer. What was left over was sliced, piled on a plate, covered and put in the refrigerator. A couple days later I reheated some of the ham and we had another wonderful dinner, this time with mashed potatoes and roasted brussels sprouts.

I still had a prodigious plate full of leftover ham. Some went in the freezer. The rest became part of an inspired transformation of an old favorite recipe I hadn’t prepared in several years.

One of the many things people don’t usually discuss before getting married is whether they like beans. In our case it turned out we each do. I found a recipe for a Bean Pot many years ago. I tried it, altered it to our liking and cooked it regularly. Then there came a long hiatus for no explainable reason. Until the last few weeks, when I mentioned several times that I had a hankering for a bean pot. Jennifer was all in.

So, when the cosmic forces presented me with a bounty of ham, a clear path merged: make the old bean pot and add a whole bunch of diced ham that wasn’t part of the original.

Soak the beans overnight in cold tap water to cover by about two inches.
Drain the beans, then put them in a 6-quart sauce pan. Add water to a depth of about two inches above the beans. Add the salt. Bring the water to a slow boil and cook for one hour. Check occasionally and add more water if needed.
Add the onions, garlic, chilies, tomatoes, taco sauce and cumin to the beans. Stir. Bring to a boil and cook at a slow boil for 1 ½ hours.
Stir in the chili powder.
Add the ham. Bring the pot back to a slow boil for about 15 minutes.

This will give you about 10 hefty bowls. It will freeze well in individual portions.

You can put the pot in the refrigerator before adding the ham. Then bring it to a slow boil the next day, add the ham, heat it through and then serve.

I like to serve this with heated flower tortillas.