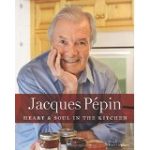 It’s more than just his recipes. It’s also his light-hearted, casual attitude toward cooking in general. “Some salt” means however much he happens to pick up in his hand and toss into a pot. “A pinch” of something often is followed by a “a little more would be good” and a second pinch. That’s the essence of chef Jacques Pépin, who long has been my favorite television chef.

So, when his latest series – HEART & SOUL IN THE KITCHEN – started on PBS, I took a break from whatever football game was on that Saturday afternoon to see what he was doing. The answer is he’s doing on TV what he does at home. He’s cooking what he cooks for his family and much of the family is there with him.

In an early episode of the TV show he prepared a rack of lamb with spicy crust and fried potatoes. The next day I was at a local book store and bought a copy of the cookbook that carries the same name as the TV series.

I did the fried potatoes that night and served it with my own version of a whole roast chicken. In the text that accompanies the potato recipe Pépin says, “I do not do much deep-frying at my house, preferring to use a minimal amount of oil in a skillet to achieve my goal.”

No wonder I like this guy. I gave up on deep frying years ago after deciding it was a waste of oil, a mess to clean up, and not very healthy. I still fry occasionally, but it’s in a skillet with only as much oil as is needed.

The second thing I prepared using a recipe from HEART & SOULD IN THE KITCHEN was poulet à la crème. With such a fancy sounding name, someone unaccustomed to French cooking might be intimidated. (It’s chicken and mushrooms in cream sauce.) But this recipe is astoundingly simple. So is just about every other recipe in this book.

The rack of lamb is there, too, and Jennifer has requested it for our traditional New Year’s Eve dinner at home, when she gets to choose the menu. I’ll probably do a real Pépin dinner and serve the lamb with his skillet fried potatoes, then I’ll find something from the dessert section of his book.

The opening sentence of Pépin’s introduction to the book reads: “Think of this book as an invitation to come over to my house for a meal.”

That sets the tone and establishes the style of the entire book. Each recipe is introduced by a personal paragraph. For the poulet à la crème Pépin writes that his mother prepared the dish using a whole cut up chicken but he uses only thighs. He tells of other changes he has made and how his mother served it with rice pilaf. So, that’s what I did – rice pilaf with sautéed onions, green peas and a bit of tarragon.

Later in the introduction he writes: “You’ll find the dishes I prepare for quiet evenings when my wife, Gloria, and I are alone … I’ve included true standbys that I rely on when guests drop by on the spur of the moment … the recipes are for the food I love to eat and enjoy with those dearest to me.”

The book delivers on that promise. Scattered through the book are essays in which Pépin relates stories of his family, his cooking with Julia Child, his thoughts about food, and a range of other personal observations. His goal, Pépin writes, is to provide recipes that enable home cooks in preparing stress-free appetizers, mains, and desserts without having to be locked in the kitchen for endless hours and miss out on the social aspects of dining with friends.

Finally, there’s this passage from the end of the book’s introduction: “Many of the dishes in this book date back to my childhood … in my kitchen a recipe is never carved in stone or static, but a living thing that will change subtly – or occasionally not so subtly – according to whim, new flavors that inspire me … I know I will never make any recipe exactly the same way again. I will always be tinkering … Please feel free to do the same with these recipes. They will become all the more rewarding when they reflect your heart and soul.”

The Jacques Pépin I have seen on television through the years has always appeared friendly and inviting. This book brings the same comfort.

(NOTE: While measuring spoons and cups are foreign to Pépin on his TV show, the recipes in the book provide directions regarding measurements. But, remember, he gives you license to change anything you want to change.)