HELLOOOO, LOUVAR / the fish that made a confident cook nervous 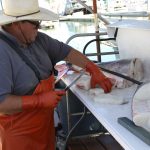 I looked lovingly at the milky white piece of fish on my red Fiesta plate.

My eyes darted from plate to plate around the table, smiling at the fish on each of the other five plates at this impromptu dinner party.

Then my eyes returned to my plate and my smile broadened. I formed a tent with my fingertips as they rested against my chin.

“Helloooo, louvar,” I said, with a joy that filled the room.

This was it. After four years of foreplay, the time had come. No more waiting. No more anticipating. The white flesh of a louvar fish finally was there in front of me.

I first heard of this prized and rare fish late in 2011, when Jim Oswalt of Gemini Fish Store in Issaquah WA mentioned louvar in his weekly email to customers. In 25 years in the fish business, he wrote, he never had seen a louvar and now he had some available on a first-come-first-served basis. Our son John was among the first to come by and be served. Here’s how he described what happened:

“I walked into Gemini Fish Market yesterday to pick up some salmon. Jim pointed out a fish he got in called louvar. He told me he had never even heard of it until a month ago, when a customer asked if he ever got it.  He then told me his distributor has only seen it once in 10 years and most people who catch one keep it. Of course I asked if it was sashimi grade and he cut me a slice to try. Holy crap. Buttery, but not rich. A light crunch like halibut fin. Smooth texture, no gristle.”

In a subsequent email John said, “Tonight I seared it in a pan just barely coated with canola oil as I wanted to flash it on a high heat. I served it with al dente broccoli, peas and snap peas. I put no sauce on anything but did put a drop of butter and a little pepper on the veggies.”

And here is the reaction from granddaughter Ella, then 6, and grandson Miles, then 4:

And so began my quest. Next time Jim got his hands on some louvar I was going to have him ship a few pounds south for me in L.A. and I was going to invite some friends to come share in the bounty. Either that or I was going to get on the next plane for Washington and join John and family for dinner.

I missed a chance to try louvar earlier this year, when I neglected to read one of Jim’s weekly emails in which he wrote of having some available. John missed it, too, but was lucky to stop in to buy something else for dinner and arrive before the louvar was sold out.

Then last Thursday I received an email from someone named Dania Williams. The subject line read “Louvar Fish!” Clearly not spam. Either that or cleverly disguised spam. It read: “My husband is a Commercial Fisherman here in Ventura County. He just started his Swordfish season and is bringing in some LOUVAR for our fresh-off-the-boat market this weekend. I enjoyed an article of yours from 2012 about Louvar, so I wanted to be sure you knew that we have some available if you are interested.”

By the end of the day I had phoned a number of friends to see who would be available for dinner at our house Sunday night. Four could make it; four could not. So, the dinner party would be six of us. I asked Dania to put aside three pounds of louvar for me. I could have gotten just a couple of pieces for me and Jennifer. But after four years of anticipation, I wanted an event, a celebration. This had to be festive.

Sunday morning I made the 45 minute drive to the Channel Islands Harbor farmers’ market. I followed my instincts and found the Fresh Fish Fanatics boat from which Dania and her husband Chris were selling the week’s catch.

At Chris’ request, one of his crewmembers dashed off and retuned with a whole 100-pound louvar, its orange tail sticking up from the large plastic barrel in which it was brought to the dock. Perfect: blue Pacific waters glistening under a bright, sunny Southern California sky as I got my first look at an actual louvar.

Chris invited me on board to watch him and his crewmember heft the fish onto the filleting table. He washed the fish, sharpened his knife, confirmed that I wanted three pounds and made the first cut into what would become our dinner just a few hours later.

I’m a fairly confident home cook. I’ve cooked thousands of meals for friends and family over the decades. I’ve tackled a wide variety of ethnic cuisines. But I don’t have much experience with fish and the prospect of my first louvar had me nervous. Emails flew back and forth between me and Jim and John and my cousin Beverly in Toronto, who is a very good and adventuresome cook. Jim and John advised me that louvar will dry out very quickly if over-cooked, so be careful. Beverly suggested serving it atop a small salad.

John said he usually grills the fish – quickly over high heat. But I don’t grill. He suggested cooking it in parchment. Jim said “no”; I would wind up with a lot of liquid in the paper at the risk of dry fish.

John said, “Don’t cook it like your swordfish,” which I steam topped with slices of lemon. He warned the lemon would be too strong for the mild fish.

Jim said sauté it in butter or olive oil and serve it with a fruit salsa. Two minutes on each side should do it, he said. But if the steaks are thick they might need to be flipped back to the first side for one more minute.

OK, I thought, but I’ve never made a fruit salsa. That meant another bout of nerves. I searched online but couldn’t find anything I liked. Most of the recipes included mango, which neither Jennifer nor I like.

Coincidentally, Jim’s supplier had delivered three louvar to him the same weekend. Saturday he told me he had served it to his family the night before. “The best louvar yet,” he wrote in an email. He said he sautéed it in butter and served it over noodles in brown butter.

That didn’t appeal to me. So, I continued to ponder on the fruit salsa. I settled on strawberries, slivered sweet apple and avocado. At least that’s where I was at the beginning of the day Saturday. Then Jennifer brought home a box of late season red raspberries. Yes, raspberries instead of strawberries, it thought. Notice, I no longer was obsessing over how to cook the fish. Sautéed in butter it was going to be.

But I needed something to bind the fruit into a salsa. Maybe I’ll soak the berries in prosecco for half an hour or so? What about a little bit of honey? No. Orange juice? Chardonnay instead of prosecco?

All this time I also was trying to figure out what wine to serve. How about starting with prosecco for the cheese and olives hors oeuvres? And maybe a J. Rickard sav blanc with the fish? That would work if I didn’t bathe the berries in prosecco. That’s where I was until I arrived at the wine store Saturday morning to pick up some prosecco.

While I was there, I also veered off the J. Rickard sav blanc and grabbed two bottles of Grgich Hills fume blanc for the hors oeuvres. Another good decision. I love the J. Rickard, but this fume was perfect with the Pt. Reyes blue, Cypress Grove Sgt. Pepper goat cheese, imported Italian Borchetta with truffles, and an assortment of Greek and Italian black and green olives. And of course some crackers.

OK. Everything’s settled. Except I was still mulling the fruit salsa. Then it came to me. I would soak the raspberries in fresh orange juice for 15 minutes, drain the juice and add yellow grapes, slivered apple and diced avocado.

I made myself a sardine and onion sandwich for lunch and sat down to watch some football. Everything was under control. I just needed to make the carrot and ginger soup for the first course, get the wine glasses and flutes from the cupboard, and help Jennifer set the table.

There you have it – the story of how Larry met louvar in person for the first time. Was it worth the wait, the worry and the effort? Every anxious second of it. The meal was a universal winner.

Were we not going to be gone the rest of the week I probably would have bought some of the beautiful, fresh swordfish and opah they had on the boat.

Chris landed his three louvar off of San Miguel Island, the westerly most of the Channel Islands about 165 miles west of Oxnard CA. That’s not anywhere near where louvar usually are caught, when they are caught. No fisherman – commercial or sport – goes out after louvar. They are a by-product of fishing for swordfish. That’s how Jim came up with the louvar at Gemini four years ago – one of his contacts was out after swordfish near Hawaii and landed three louvar. More often, when a commercial boat lands a louvar the owner keeps the delicacy for himself.

Wikipedia describes Louvar as “a big ellipsoidal fish, growing to two meters in length. It is pink in color and possesses a characteristic bulging forehead. It is found in surface waters of temperate and tropical oceans throughout the world.” A louvar’s diet consists exclusively of jelly fish.

That Chris was able to land the louvar where he did is testimony to the ocean warming in the current El Nino condition. Whether it means we will see louvar available more frequently in the coming months remains to be seen.

In the meantime, I met Dania and Chris. My name is on the list to receive the weekly email notification of what they will have available each Sunday. I expect to see them with some regularity even if it is a 90-minute round trip from our home to their boat at Channel Islands Harbor. And if the email says there will be louvar, I’ll be making another round of phone calls to put together another spur-of-the-moment dinner party.

(The photo accompanying this feature is of Chris Williams, the fisherman who caught our louver, as he cuts the actual steaks we ate at the dinner party.)