THE CALIFORNIA DROUGHT / coming soon to your super market? 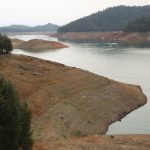 We should be afraid – very, very afraid. And we shouldn’t be looking to the predicted El Niño to save us.

The subject, of course, is the drought that has gripped the west – California in particular – for the last four years. The photo attached to this feature is Lake Shasta in Northern California, the largest water storage facility in the state. I took the photo during a recent road trip to the northwest. Lake Shasta currently is at 37% of capacity.

California has lost more than 6 trillion gallons of water from its reservoirs and natural underground aquifers during the drought. The snow pack in the northwest is as a 500-year low.

With increasing intensity, Californians are hearing of mandatory and voluntary water-saving measures. We are cutting back on water use in our homes and learning of new efficiencies.

To many Californians the drought has been mostly an abstraction until this past summer, something they saw on television or read about in the newspaper. To them I issue an invitation to drive by Lake Shasta. What we saw was jaw-droppingly, stunningly frightening.

It was frightening from the perspective of California residents, who already are seeing their lawns turn brown, taking shorter showers, doing their laundry less frequently, and changing their dishwashing procedures.

California has been the nation’s number one producer of food and agricultural products for at least 50 years. California farmers grow more than 450 different crops. The state is the nation’s number one producer of milk, cheese and other dairy products. California produces more than 99% of the world’s almonds, artichokes, dates, figs, kiwifruit, persimmons, pomegranates, pistachios, prunes, raisins and walnuts.

California farmers produce more cantaloupes than the next four states combined, 86% of the lemons consumed in the U. S., some 80% of the olives and 90% of the wine, 83% of the nation’s strawberry crop and 94% of the processed tomatoes.

More than half the agricultural and dairy products produced in the U.S. are produced in California. That the drought has not yet had a devastating impact on food supplies and prices across the nation is a wonder that can’t last forever. Among other things, the underground water tables that have sustained much of agriculture are being drained to the point where the ground is sinking.

If the drought continues the potential consequences for the rest of the nation and the world could be devastating. No matter where you live, food produced in California probably plays a role in your day. And now, because of the tightening water supplies, agricultural production is being reduced. The drought has caused hundreds of thousands of acres of agricultural land to lie fallow and raised the cost of what water is available.

As winter approaches, news coverage has turned to focus not on the consequence of the drought but on predictions that an El Niño condition will drive heavy rain storms into the state before we see spring again. Among many, that has given rise to a belief that the days for drought are almost behind us and soon we’ll be able to water our lawns everyday as we did before.

It’s a false hope. El Niño itself will not come riding in on a beautiful horse to rescue us.

El Niño is a rather simple sounding name for a very complex climate event. It originally was the name attached to the warming of the surface of the Pacific Ocean near the equator off the coast of South America. Now, it has grown to include the impact that warming has on weather throughout the world. One consequence of the warming of the ocean in the past has been increased rain storm activity in California.

Weather scientists estimate a 95% probability that the building El Niño will mean a very wet few months for California this winter. So far, scientist believe, the current developing El Niño condition could be the third most severe in history.

If they are correct that will mean a whole lot of water.

The previous most severe El Niño condition pounded California in the winter of 1998, with February becoming the heaviest hit in most areas. UCLA was doused with 20.51 inches of rain in that month, the Santa Clarita Valley received 16.58 inches, and downtown L.A. got 13.79 inches.

Not only would those kinds of numbers this winter not resolve the drought, they would very likely bring some extremely disastrous effects. Storm damage for Ventura and Los Angeles Counties for just one day in February 1998 – the 23rd – was estimated at $20 million. Estimates for the state exceeded $475 million in damage from February 9 to March 1 and 15,000 people filed for federal disaster relief.

What scientists say they do not know about the coming winter is how many storms there will be, how much rain they will bring, where the storms will hit and if it will have any impact at all on the critical snow pack in the northern Sierras. It could be the entire impact might be restricted to eight or nine southern California counties and Mexico.

If that happens it might serve to partially replenish some of the drained aquifers, but most of the rainfall will flood streets before entering storm drains and heading out to the ocean. It will cause havoc with traffic and probably create substantial mud slides.

What is needed to bust the drought is heavy snow in the Sierras not just for one year but for several years.

So, whatever El Niño brings this winter, if it brings anything, the need for continued conservation and the potential for shrinking food supplies and higher food prices will not go away. In short, we’re in this for the long haul.

In the meantime the response of local jurisdictions has varied across the state. Pleasanton residents and businesses in the San Francisco Bay area have reduced water use by 47%. The city has instituted a program of providing free reclaimed water to local residents for use in landscaping. The city has begun development of a water recycling plan that ultimately will save some 450 million gallons of potable water each year.

These are the kinds of things cities and water districts throughout California should have implemented years ago and will have to implement in the future, even after the drought has abated.

Many look to the vast Pacific Ocean and advocate desalination as a solution. Two new plants are going on line. But desal is an expensive proposition with serious environmental concerns.

When a drought of this magnitude hits, there isn’t much a city or state can do to immunize itself. But it can take measures to mitigate against the effects. In parts of Belgium property owners are required to build large underground storage facilities to store runoff water. Jurisdictions already have recognized and acted upon the potential for recycling. And there is increased recognition of the need to capture water that now flows down storm drains, into flood channels and out to the ocean.

The challenge for elected officials and water managers will be to maintain the focus on the critical need for remediation and wiser water management policies not just during the drought but after it is over. The challenge for the public will be to accept the increased costs of implementing those measures and not just forget about water issues after the drought vanishes from the news.

UPDATE (March 24, 2016) – The winter storms in Northern California have brought the dams to a level where water is being released for flood control purposes. El Nino has not hit with the force expected and while it has been a relatively good year for rain, the drought is far from over.