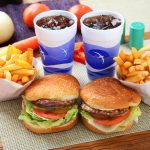 Ever wonder why burger chains use near-naked models as their sales images? Why not run ads featuring goggle-eyed mad scientists instead?

But the truth is today’s Dr. Frankensteins have more influence over your burger-buying habits than do the sex symbols inviting you to join them in a ménage with their ground meat.

Put simply, big food has spent big money to cook up the most profitable physiological and neurobiological ways to manipulate our eating expectations and preferences. They have also sophisticated their inundation systems. As a result, we are now part of the Corporately Modified Tastebuds (CMT) generation.

Can independent restaurants compete with that? Probably. But it helps to understand that many of their customers, willing Gen-CMTers or not, are influenced by the standards created by America’s most skilled processed food formulators, marketers and distributors.

My source for a lot of what follows is Dr. Steven Witherly’s fascinating look at why humans like junk food. If the following seems like a fact or a product of research, it is likely his. The snide asides are mine.

First, bear with me on some definitions. (Or bare with me, if you’re a burger model).

Witherly’s most important food theories include:
•  taste hedonics (the appeal of salt, sugar, fat and savory),
• dynamic contrasts that cause food arousal and surprise,
• sensory properties that evoke past memories,
• the optimum calorie density and
• the love of foods in emulsified forms.

As they say, that’s a mouthful.

We like foods with sensory contrasts – like light and dark, sweet and salty, temperature changes. Think of a tostada with all its tastes and textures.

Other Witherly findings:
• Big portions excite the palate,
• we crave calorically dense food when we see it,
• calories can help burn-in permanent liking,
• picky eaters tend to eat the same foods over and over,
• eating fat-protein-carbohydrate laden food conditions humans to prefer that food.

There’s much more to the study, but it all tends to prompt this conclusion: It is possible, given the resources, to condition Gen-CMTers to accept fast food flavor profiles as the standard to which other restaurants should aspire.

It’s the pinnacle of fast food science, incorporating all the basics of the hedonistic food selection process. (No need to speculate what the bikinis, long legs and red lips contribute to the laboratory formula).

No wonder on-line dining reviews by amateur foodies invariably comment on the absence of one or more of the fast food traits, as if this were a failing of the chef rather than the restaurant’s refusal to emulate common CMT food characteristics.

But conform or not, here’s the reality restaurants must all confront: in the land where multi-billion dollar fast food corporations predominate, taste-producing salt, sugar and fat will prevail. And that has more to do with the scientists who develop and refine profitable products than it does with the clowns, kings, jacks-in-the-box, redheaded girls in pigtails or models who present them.

Will the trend eventually reverse? Well, we now look at smoking differently than we used to. With our healthcare crisis escalating at least in part due to poor eating habits, perhaps some day we will look at CMT differently as well.

Part one of this three-part series — CMT / What is it and why it’s of more immediate concern than GMO — can be read at https://www.tabletalkatlarrys.com/index.php/2015/08/cmt-what-it-is-and-why-its-a-more-immediate-concern-than-gmo/

Part two of this three-part series – Can Restaurants Survive in the Processed Foods era – can be read at https://www.tabletalkatlarrys.com/index.php/2015/08/can-restaurants-survive-in-the-processed-foods-era-part-two-of-three/