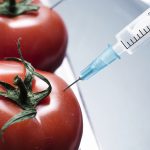 Are you OK with frog DNA in your corn chowder?

Provocative topic no doubt, especially for vegans, but no less compelling than: are we regularly eating the food equivalent of lead paint?

Perhaps. But those were the kinds of what-will-become-of-us questions ignited by Proposition 37, California’s GMO labeling measure that was rejected by voters in 2012.

Television viewers were deluged with ads from crusaders wanting to save humanity from having to live either with or without (depending on the ads’ producers) genetic alterations to our food supply.

Now, as you may recall, the Bible tells us that original sin involved eating. And while, technically, all  subsequent food sins, by definition, are at least slightly less original than eating an allegorical apple, some GMO opponents suggested that their war against food re-engineers was akin to protecting everyone from the modern world of Genesisian serpents beguiling us to eat things we are better off avoiding.

A word here about word re-engineering. While “Genesisian” – referring to the kind of villains whose ancestors might have lurked in Garden of Eden – may not have been a real word until I genetically modified it, the world is surely better off with the introduction of this comparative adjective.

But the point here is, GMO is a highly emotional issue. Few of us are planning to subsist on a biblical diet of raw, plant-based, pesticide-free cuisine – even including serpent-recommended fruit. But the battle flag against genetically modified corn and other staples is still waving furiously.

Witness the waitress I saw in a vegetarian restaurant who wore a T-shirt inscribed with: “GMO aka WTF.”

And while I believe the GMO debate is worth having, I think there is an acronym far more worthy of attention. And that is CMT, a concept victimizing consumers and restaurateurs, vegetarian or not.

Never heard of CMT? Not surprised. It’s another of my contributions to the lexicon. It stands for “Corporately Modified Tastebuds.” And it has far greater implications to America’s food preferences, restaurant patronage and general public EssaysWriters health than all the GMO products combined.

What Is CMT And Why Should I Care?

Michel Moss, a Pulitzer Prize-winning reporter, is the author of Salt Sugar Fat, a 2014 book on the processed food industry. His message: over the last 100 years, Big Food’s chemists, researchers and marketers have altered the American diet to favor taste over nutrition – with disastrous health consequences.

“The poor cows have lived and been slaughtered for nothing because no one can appreciate the meat they gave their lives for if you refuse to season it.”

“The broccoli was not seasoned.”

In defense of the broccoli lady, who yearned for more salt, and the guy who believes beef should taste like something more than beef, they are simply suffering from CMT syndrome.

Says Moss of his research: “What I found… was a conscious effort – taking place in labs and marketing meetings and grocery store aisles – to get people hooked on foods that are convenient and inexpensive.”

How do they do it? By using sugar, salt and fat – in quantities way beyond what’s good for us – to create optimum sensory intensities called bliss points.

For example, take Cheetos. According to Moss, Frito-Lay employed nearly 500 chemists, psychologists and technicians conducting research costing up to $30 million a year on mouth feel and aroma of 21 varieties of the puffs.

The result, again according to Moss, is what food scientist Steven Witherly calls “one of the most marvelously constructed foods on the planet, in terms of pure pleasure.” Witherly was especially reverential about Cheetos’ ability to melt in the mouth. “It’s called vanishing calories density,” says Witherly – which means it melts down so quickly that the brain thinks there are no calories in it, signaling that it’s OK to keep eating.

In short – high marks for taste and bliss with minimal guilt.

And, obviously, it’s not just Cheetos. It’s literally from canned soup to nuts and nearly all processed food in between. As you would expect from an industry with roughly $1 trillion in sales per year.

GMO or CMT? Which Re-Engineers Have Your Attention?

A few more tidbits from Moss for the GMO crusaders to chew on.

Food manufacturers are fiddling with the structure of fat globules, affecting their absorption rates, and increasing the allure of the products by improving what is known in the industry as “mouthfeel.”

Food manufacturers have altered salt’s physical structure to increase its allure: they now produce it in 40 different grades, from powdered to pyramid shaped, each of which is specifically designed to send the strongest signals to the brain.

So, as absorbing as is the debate on the future of GMO – and questions like, should we be scared that some day, cows eating modified corn may grow extra legs and horns – it might be wiser to focus more attention on food engineering that is affecting us in the present.

As in, perhaps we should be going beyond concern about the GMO corn in high fructose corn syrup and instead consider that some analysts believe that Big Food uses the GMO HFCS to produce compulsive eating patterns and light up the brain in the same manner as addictive drugs.

And, in short, somewhere in this CMT equation is a national obesity and diabetes crisis – not in the future, but now.

Next Chapter in this three-part series: CAN RESTAURANTS SURVIVE IN THE PROCESSED FOOD ERA – https://www.tabletalkatlarrys.com/index.php/2015/08/can-restaurants-survive-in-the-processed-foods-era-part-two-of-three/