CAN RESTAURANTS SURVIVE IN THE PROCESSED FOODS ERA? / part two of three 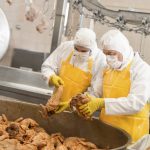 That’s the ad copy for a recent Panera Bread TV campaign – and the core of the restaurant chain’s marketing strategy for surviving the Corporately Modified Tastebuds (CMT) era.

It is an eloquent capitulation to a generation of consumers raised on processed foods. Restated: We can suffuse even the healthiest ingredients with fast food flavors if that’s what it takes.

In this case, their fast food flavor is usually salt. Take Panera’s low fat lemon chicken orzo soup. Sounds like a “food that’s good for you.” Until you factor in the 2240 mg of salt per portion. Smokehouse turkey panini? 2590 mg salt. (The FDA suggests we stay within  2,300 mg per day total – 1,500 if you’re over 51.)

But that’s the challenge confronting not only Panera, but every restaurant in America – from the most exclusive to the darkest dive. How do they satisfy a population of taste hedonists who calculate eating pleasure based on what they have been taught by America’s most skilled processed food marketers, formulators and distributors.

In short, how do restaurants keep diners happy in the world where the fast food giants have set the standards for creating and satisfying cravings? How do they compete with the corporate tastebud modifiers pumping out calorie dense food elevated in desirability by enormous amounts of sugar, salt and fat?

In a Part One of this series, I illustrated the dilemma by reprinting the comments of two presumably average diners, each offering an on-line review of a high-end San Francisco steakhouse.

One complained her vegetables were unseasoned. The other said: “The poor cows have lived and been slaughtered for nothing because no one can appreciate the meat they gave their lives for if you refuse to season it.”

Here are some more on-line editorials from “real people” reviews of high-end restaurants. See if you detect a theme.

“It was weird, and I was disappointed there wasn’t a full on menu on burgers! I was like… are you freaking serious?! Not only do you have only ONE BURGER in the menu, but also it’s not even fun or exciting?!”

“I had a McDonalds burger a few days ago and I would be lying if I didn’t say that I would prefer that.”

“My wife had the short rib. Once we added the gravy it was delicious!”

“The potatoes were awesome, but the quail was barely seasoned.”

“I had the lasagna Bolognese and it wasn’t as tasty as I expected and the ‘little ears’ pasta was bland – so bland my friend had to request chili pepper.”

Restaurateurs know that negative on-line reviews like these can damage or crush their business. And yet many are loathe to respond by serving meals that emulate lab-formulated salt, fat and sugar profiles structured to create optimum sensory intensities among average eaters, called bliss points by flavor enhancing researchers.

So what are they to do to keep from disappointing the CMT generation? My guess is that they lean more heavily on ingredients that produce big flavors.

Dr. Steven Witherly in a fascinating and exhaustive look at why humans like junk food (http://jamesclear.com/wp-content/uploads/2013/11/why-humans-like-junk-food-steven-witherly.pdf) offers a list of enhancers that both chefs and home cooks can use to “increase flavor and complexity, both of which contribute to food pleasure.”

Witherly goes on to discuss the need for chefs to be able to season properly, sequence strong flavors, know how to use herbs, stock and demi-glace and to employ a variety of skills not taught to McDonalds employees.

These are some of the tools of the great and aspiring chefs. They are also some of the weapons of the great and aspiring restaurateurs who know their fates are more and more tied to the on-line reactions of the CMT generation, a mass of eaters, raised on snack food, who want flavor profiles in their restaurant meals that offer the same satiation they get from their chili-cheese Cheetos, Lucky Charms cereal, Cherry Coke, jarred sauces or pizza with a hot dog crust. In other words, – yes – they want to eat good food with the same gusto as they eat bad food.

Part one of this three-part series — CMT / What is it and why it’s of more immediate concern than GMO — can be read at https://www.tabletalkatlarrys.com/index.php/2015/08/cmt-what-it-is-and-why-its-a-more-immediate-concern-than-gmo/

COMING NEXT IN THIS SERIES: Why the CMT generation love fast food burgers