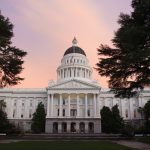 An electric ballet of lightning bolts leaped across the Northern California sky as I motored north through Stockton on Highway 99.

The heat of an August afternoon had given way to a warm evening before I put the top down on my 1964 Pontiac Lemans and left L.A. bound for Sacramento and a temporary assignment as summer vacation replacement bureau chief at the Copley News Service offices in the State Capitol Building.

Talk about exciting. I was 26 years old and I was going to be a BUREAU CHIEF in the State Capital. I had been working out of the Copley bureaus in L.A. City Hall and the County Hall of Administration, covering politics and government for the past 11 months. But this was the big time. The State Capitol.

It was Sunday, August 8, 1965 – 50 years ago. Thunder was applauding my arrival and the heavens were flashing a welcome as I neared Sacramento about 11 p.m. The streets were wet but the rain had stopped.

I pulled up to the front of the posh El Mirador Hotel with its three bars, an elegant upstairs restaurant and a reputation for all sorts of hi-jinx. The Copley organization had reserved a room for me for my two-week stay. I handed my keys to the valet, checked in and headed straight for the bar. I was keyed up, invigorated and wanted to relax before going upstairs for a good night’s sleep.

I was up early Monday morning – showered, shaved, dressed, finished with breakfast and headed across “N” Street to the office on the mezzanine level of the Capitol rotunda well before nine. I knew the part time legislature was not in session and I would need to be inventive to find and file any meaningful stories.

There was a trickle of press releases from various state departments and agencies that first morning. I chatted with the employees who dropped them off, made some phone calls for additional information, and then turned some of the releases into stories that I fed out over the teletype machine.

Lunch time arrived and instinct sent me west on “J” Street, where I found Sam’s Hof Brau a few blocks from the Capitol. The place looked busy, so I ducked in, scanned the menu and decided to stay. I had a prestigious job but not a prestigious pay check. That made Sam’s an excellent choice. The food was acceptable, the price reasonable.

After work I discovered one of the wonders of the El Mirador – the Lower Bar, where a glass wall afforded an underwater view of one of the swimming pools, where attractive young women performed water ballets for bar patrons. It became a dependable spot for an occasional early evening or late night drink.

While I nursed a Perfect Manhattan, I learned from the bartender of two other potential lunch places – Frank Fats and Posey’s Cottage. Both were hot spots for lobbyists and legislators. Posey’s is gone now but Fats remains a Capital institution, with excellent Chinese food.

If the pace in the office was slow the first two days of my Sacramento stint, it came to a complete halt on day three – Wednesday, August 11, 1965, the day the Watts riot erupted and the entire world turned its attention to Los Angeles.

I became superfluous. The legislature was out of session. The Governor was in Greece. And Los Angeles was burning. No one cared what I was doing or wanted to hear from me. I interviewed members of an African-American organization, who were in Sacramento for a convention. I got their thoughts about what was happening in Los Angeles and filed a story. Copley headquarters politely asked me to keep the wire clear for breaking news out of Los Angeles.

I headed for my hotel room, changed into my swim trunks, commandeered a rubber raft and spent much of the rest of my time in Sacramento floating blissfully in the El Mirador pool. I tracked the events in Los Angeles and phoned friends and family regularly. But my duties in Sacramento had been reduced to checking the mail each morning, clearing out the press releases from the in-box once a day, and staying off the wire machine.

That left me with plenty of time to tour the area, and as always restaurants were high on my target list. I found a really good mom and pop Mexican restaurant in the basement of a building a few blocks east on “N” Street. I gave the pricey hotel restaurant a try. I stumbled upon a series of non-descript and easily forgotten restaurants in the Capital area.

It was the start of what became my 50-year love affair with Sacramento.

In the 50 years since that first foray into the capital, I have returned hundreds of times as a news reporter and then as a political consultant. I’ve elected scores of legislators to the Assembly and Senate and become friends with several generations of lobbyists. To those who dismiss politics and politicians with “they’re all the same,” or “they’re all a bunch of crooks,” I say you are wrong. As a reporter and a political consultant, I’ve known hundreds of elected officials. The overwhelming majority have been and are hard-working, honest people who are trying to make things better. I may not always agree with their ideological approaches or their definitions of what “better” actually means. But I respect most of them as sincere in their beliefs.

Of course, there have been the few notable miscreants to taint the process and the reputations of all the others. And there have been those who intelligence quotients may have resembled their golf handicaps. They became marginalized by the process. The venomous atmosphere or rank partisanship of the last decade plus has been hurtful to me and all those who try to maintain respect for the institution of the state legislature. But the bright spots continue to shine through.

In recent years my attraction for Sacramento took on new substance as my son Lloyd served six years in the State Assembly and met a bright and wonderful women, Edie, who he married. They have given us two granddaughters, Alise and Carlie.

Through the years I have seen Sacramento change and grow. As a family we have sampled much of what the city has to offer and I have suggested to a large number of friends that they visit with their children and grandchildren.

The Capital Building is an architectural and artistic wonder, with its beautiful mosaics and wood carved stairways. Old Town is fun alongside the Sacramento River, with a few nice restaurants, some decent shopping among the touristy gift shops, and a very good railroad museum. There also are the Crocker Art Museum, the California Automobile Museum, the Wells Fargo History Museum, and the California Museum for History, Women and the Arts. Then there’s Sutter’s Fort, so vital to the state’s gold rush days.

And in the summer there’s rafting on the American and Sacramento Rivers.

Gone but not forgotten are such treasured restaurants as Aldo’s, La Sur, The Broiler, Ellis, Brannan’s and a host of others that came along, became favorites and then faded away. Their places have been taken by some highly worthy successors.

With Lloyd and Edie, each keenly appreciative of good food and restaurants and both deeply enmeshed in the social and civic life of the city, I have my own private scouts to keep track of new places that come along. And there is Larry Sheingold, a co-host of the restaurant website www.atLarrys.com and a frequent contributor to this online food magazine. He adds his own informed perspective on the Sacramento food scene.

Fifty years ago I could not have imagined a world class sushi restaurant in Sacramento. Now there is Kru, which Lloyd found several years ago, and where he and I had a two-hour lunch not long ago and where many of the city’s top chefs spend their off hours. The Kitchen is more than just a great restaurant; it’s a four to five hour dining experience that’s worth every minute.

Paragary has been a solid feature on the local restaurant scene for decades. It was recently remodeled. A new menu was put in place. It’s on my “don’t miss it” list. Ella Dining Room and Bar downtown and Star Ginger, OneSpeed, and 33rd Street Bistro in East Sacramento are personal and family favorites.

Just a bit out of town and worth the trip are Potah Creek Café in Winters for fabulous burgers and Al’s (Al the Wop) in Locke on the delta, where the steaks are just passable but the location and atmosphere make it worth the trip.

After a recent 10-day visit in Sacramento, during which we lunched and dined in a dizzying array of restaurants, I started to count off the places we didn’t get to. For a sample of some of the current top spots in Sacramento go to www.atlarrys.com. Select Sacramento from the drop down menu at “region” and browse through the 38 recommendations posted for local and area restaurants by our co-hosts.

After 50 years, I still look forward to every visit to Sacramento. Of course I do. Two of my grandchildren are there. But there’s also the top drawer restaurant scene, the grandeur of the Capitol Building, the river, the museums, and an overall welcoming feeling. No more thunderous greetings; just a feeling that I love this town.