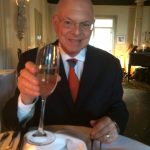 Remember Napa Valley before it became famous in the 1970s after a wine tasting event in Paris found Napa’s top wines rivaled famous French cuvees? (If you don’t, read George Taber’s The Judgment of Paris.)

There were some small wineries then of various qualities, all struggling to exist along empty two-lane roads. That was then, before the crowds, the Oakville General Store, the Rutherford Grill, guided wine-region tours, and wine-drinking trains.

The Finger Lakes wine region in upper New York State is like Napa before the deluge. Bev Wellman and I celebrated our 50th wedding anniversary there in early July 2015, staying at the charming Geneva-on-the-Lake Resort. It’s south of the New York State Thruway (I-90) between Rochester on the west and Syracuse on the east.

We tasted at three wineries: Fox Run and Billsboro on the western shore of beautiful Lake Seneca, and Dr. Konstantin Frank, above Keuka Lake and north of Hammondsport.

We motored up and down the 34 miles of NY 14 alongside Lake Seneca, from Geneva to Watkins Glen, plus a 37-mile side trip on NY 54/54A to Dr. Frank near Hammondsport. Each drive took about an hour on mostly well-paved two-lane highways. The roads were lightly travelled. We never had to pass a car, truck or RV; hardly any one passed us. We just enjoyed the scenery. The roads were twisty enough for our BMW to love driving them, but not too scary for us to forego wine tasting. That’s the only way to go: instead of Napa’s wine train, a single-track train carries sand and other minerals alongside Lake Seneca.

In a nutshell, the wines were fine, the people were gracious, and the prices were fantabulous.

THE OLD DAYS
Until the 1970s, the Finger Lakes region was disparaged as being too cold and with too-short a growing season to make decent wines. Growers deemed it appropriate only for hardy labrusca grapes that made Concord and similar sweet, earthy, “foxy” smelling wines.

The region was dominated by Manischewitz and the Taylor Wine Company. Indeed, as I grew up in New York City my family thought Manischewitz was the only wine to drink.

After our first French wine experience in the early 1970s, Bev and I served Pinot Noir to the family. My uncle smiled wanly at our pretentious youth and asked if we had any Manischewitz. The rest of the family breathed a sigh of relief.

Could California and European style vinifera wines be made in the Finger Lakes, supplanting the cold-hardy but foxy labruscas? The local vested interests said “no,” but there were rebels. We plunged into the labrusca-vinifera war in our first trip to the Finger Lakes in the late 1970s. We were enticed by a New York Times story about the fight between Walter Taylor and the Taylor Wine Company that his family had founded. Walter claimed he wasn’t being permitted to make quality wines – only “tank car wines” – and he founded Bully Hill Wines nearby as competition.

The Taylor Wine Company won a lawsuit forbidding Walter from using his own Taylor family name on his own wine. In response, Walter labeled his wine Goat White, proclaiming, “They have our name and heritage, but they didn’t get our goat.”

He marketed his new wines as the “Un-Taylor.” The cause was noble, Bully Hill winery was fun, the wine labels were beautiful, and chatting with exuberant Walter was great. However, the inexpensive wines, often labrusca-vinifera hybrids, were not enough to draw us back.

NOW
Fittingly, the first stop on our 2015 trip was at Dr. Konstantin Frank’s, in many ways the founder of well-made vinifera wines in the Finger Lakes. A wine-grower in the USSR republics of Ukraine and Georgia before World War II, he became a U.S. citizen in 1957 and bought 118 acres for $6,000 in 1958.

Just as Napa County growers did with the University of California at Davis, Frank paired up with the Geneva (NY) Agricultural Experiment Station and worked to learn how to grow vinifera in the cold climate. His story is told in Wikipedia and at greater length in Thomas Russ’ Finger Lakes Wine and the Legacy of Dr. Konstantin Frank.

We met Dr. Frank in the late 1970s on our first visit to the Finger Lakes. He was an elderly, dignified man, proud of what he had accomplished – principally with white wines such as Riesling (from dry to semi-dry), Gewürztraminer, and the Georgian-origin Rkatseteli (which we’re drinking tonight to lubricate my writing).

The place we visited in the 1970s was a small house next to a small winery. It had a plank table for tasting.

Dr. Frank died in 1985, but his son Walter took over and expanded a bit. We visited again in the late 1980s. The tasting room was less rough, and his son Willy had introduced rather fruity sparkling wine made the traditional méthode champenoise. Now, Willy’s son Fred heads the winery, with his own son helping out.

In 2015 we were excited to return to this historical site, and just as importantly, the home of fine, affordable wines. Where the Finger Lakes region was the home of a few struggling pioneers in the 1970s – 1980s, there are more than 100 wineries now. The ones we visited are solid, but they all are small.

With the proliferation of wineries, it is like Napa before Robert Mondavi, André Tchelistcheff, and the Judgment of Paris put it on the world map in the 1960s – 1970s. As Table Talk editor and publisher Larry Levine pointed out to me, you hardly ever see Finger Lakes wines outside the region.

Unlike Napa, tasting is usually free. We went through a bunch of glasses at Dr. Franks, graciously served by the informative hostess Tracy. No longer rough and ready, the tasting room and shop are sleek – with local salad dressings, artisan crackers, and cheeses for sale. We bought the rare Rkatseteli, as a good wine and a rarity to serve to fellow wine-lovers.

The dry whites have won a number of awards, probably more than other regional wineries. The prices for good wines were wonderful, ranging between $15 and $25 a bottle: In other words, decent middle-range Napa quality at un-Napa prices.

Fox Run Winery on Seneca Lake also has a long history, if not quite the pioneering story of Dr. Frank. We had known the winemaker Peter Bell when he was growing up in Toronto, and we visited him in the late 1980s, soon after he started making wine at Fox Run after studying wine-making in Australia. It was a small operation then, and we sat in as Peter interviewed local grape growers to select from their vineyards.

In 2015, Fox Run is a going concern, with decent reds as well as whites. The tasting room is lustrous and well-organized. The whites are featured here, too.

“Peter is a master at balancing acidity,” said Ariel, our tasting host.

By contrast to the old “just wander around days,” Fox Run does formal tours – but charges only $8. Most wines are under $25. Limited as we are in the number of bottles we could import back to our home in Canada, we bought only two of the highest-end Meritages for $40 each – a blend of cab sauvignon, cab franc, and merlot. What the heck, it’s our 50th anniversary. We also bought a lovely artisanal cheese and cold-cuts lunch, along with locally-made flatbreads.

The last wine we sampled, Billsboro, is a pioneer of a more recent vintage. It was established less than a decade ago by Vinny and Kim Aliperti from the New York City area. They had started by making wine near Montauk in eastern Long Island. We didn’t go to the winery; it came to our Geneva resort for a tasting. The wines were solid and inexpensive.

AND IF YOU GO
If you are en route from Boston or New York to Buffalo, Toronto, or Chicago the Finger Lakes is a worthwhile stop over. The lake is beautiful, the Geneva resort is homey and quirky, with great personal service. The nearby Watkins Glen gorge is fantastically beautiful. Its geological formations are the best reason to ban shale oil production in New York State.

We happily climbed the gorge’s 834 steps in an hour. Be prepared to get wet on the Gorge Trail from the water dripping from above and puddling on the ground. We proudly walked up, but took the local bus down. We did another side trip to the famous Watkins Glen raceway to watch sports cars going at top speed.

The best reason to visit the area? It’s the combination of affordable wine – especially the Rieslings – served by unpretentious people in beautiful surroundings. It made for a mellow anniversary.

BARRY WELLMAN is a prominent sociologist and co-author of the book, NETWORKED. He also is a first cousin to the editor and publisher of Table Talk atLarrys.com

PHOTO is Barry Wellman enjoying Chateau Frank’s Champagne at Geneva On the Lake Resort for his 50th wedding anniversary.