SCANDIA, A PALACE OF MEMORIES / gone but never to be forgotten 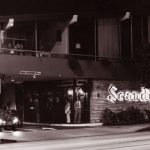 It’s gone. Flattened. Scandia – the palace of memories for generations of Los Angeles diners – has been leveled and hauled away to make way for a large mixed use hotel project.

I had no idea how I would feel when they finally tore down the building that formerly housed Scandia on the Sunset Strip in West Hollywood.

We took our two sons to dinner at Scandia, when they were still in their single-digit years. One of them selected Scandia for his family birthday dinner when he was just seven or eight years old.

Jennifer and I still talk of the look on the face of our brother-in-law Bryan Garner, when we took him and Jennifer’s sister, Sylvia, to dinner at Scandia while they were visiting from England. His jaw dropped the first time he saw the Viking Sword. It was one of the signature items on the Scandia menu – large pieces of turkey, chateaubriand and pork chop medallions with mushrooms and tomatoes served en flambé for two people. The flaming items skewered on a sword were carried aloft through the dining room from the kitchen to the dinner table.

Jennifer and I dined at Scandia, not just for special occasions, but also because we loved the place and just felt like being there.

I was fortunate to have attended and appreciated many of the great restaurants that dotted the Los Angeles landscape in the 1950s and 1960s – Perino’s, The Windsor Room, Chasen’s, The Brown Derby. They were among the playgrounds of my bachelor years. But Scandia, that was where most of the greatest memories were made. I’ve talked with hundreds of others who have told me of their own special Scandia memories of birthdays and first dates and anniversaries. Scandia was the Ebbets Field of L.A. restaurants – gone but never to be forgotten.

I learned to drink Perfect Manhattans at Scandia instead of just plain old Manhattans. I knew the waiters, and bartenders. The parking attendants addressed me by name and the maître‘d always managed to fit me in, even if I phoned for a table at the last minute.

Then the doors closed for the last time after dinner service May 4, 1989. There was no announcement of the closing. Years later a former Scandia employee, who said he was there, told me pots and pans were left unwashed on the stove and kitchen counter that last night and the staff were told not to come in the next day.

There were a couple of unsuccessful attempts to open other restaurants in the building. A Mexican restaurant opened in part of the site. It wasn’t very good and didn’t last long.

For the last 23 years the building sat empty hard by the prime intersection of Sunset Blvd. and Doheny Drive.

About five years ago, on the way to meet a friend for dinner, I drove by the Scandia building and noticed a sign in the window. I pulled over in front of the ghostly monument.

I knew the property at Sunset and Doheny was too valuable to stand vacant forever. I commented to friends many times about the amount of property taxes the owners were paying every year on an un-used building and a large un-used piece of land in the heart of one of the most expensive neighborhoods in greater Los Angeles. I knew no one was going to open a new restaurant there. And if they did, it wouldn’t be Scandia.

The window sign told me a developer was seeking permission to demolish the building and construct a new mixed use building in its place.

I walked to the front entrance and put a hand on the towering wooden door. I stood and reflected on the numbers of times and the many people with whom I had walked through those doors. It was as close as I could come to touching the good times.

The West Hollywood City Council has approved a developer’s plan a 146-room, five-star hotel with 20 condos at the rear of the property. The hotel will include a 5,000+ square foot restaurant and 25,000 square feet of retail space, outdoor paseos and rooftop patios.

For a while I thought it would be nice if the hotel would be called The Scandia as a tribute to the glory, the good times and the memories so many people will always associate with that site. Now, I’ve abandoned that notion. Call it whatever you want. But don’t call it The Scandia. Time has passed that by and no matter how fast you run you can’t catch yesterday.