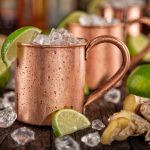 The Greater Los Angeles basin stretched endlessly out from the foot of the hillside mansion, where some 200 celebrants were gathered on a bright spring day for a Saturday afternoon wedding, reception, and dinner.

Waiters marched in a non-stop parade of hors d’oeuvres. Behind the two well-stocked patio bars were tables filled with copper mugs. That was the tip off. Then I read the card on the bar. It informed that the “signature drink” for the bride and groom was a Moscow Mule.

Talk about an echo from a long distant past. Moscow Mules in copper mugs. I hadn’t heard of a Moscow Mule or seen a copper mug in decades. But I soon discovered the drink is a current rage among the 20 and 30 somethings of Los Angeles.

I smiled. Everything old really is new again. My Perfect Manhattans have been resurrected and now Moscow Mules have reappeared.

One person at the wedding, having never before heard of a Moscow Mule, thought it was an invention of the bride and groom. I knew better. I remember this concoction from its earlier life in the 1940s through the early 1960s. Such is the advantage of having made enough trips around the sun.

Undocumented legend attributes the invention of the Moscow Mule to John G. Martin of G.F. Heublein Brothers, Inc., an east coast liquor distributor, and Jack Morgan, President of Cock ‘n Bull Products of Los Angeles in 1941, a company that made ginger beer among other things. Cock ‘n Bull Restaurant on the Sunset Blvd. in L.A. was a well-known celebrity hangout. According to the legend, Heublein provided the vodka and Cock ‘n Bull furnished the ginger beer at the birth of the Moscow Mule.

The drink reputedly was invented at 1) the Chatham Hotel in New York, where a shipment of ginger beer was introduced to a bottle of vodka while Martin, Morgan and Rudolph Kunett, president of Pierre Smirnoff, were quaffing and nibbling hors d’oeuvres, or 2) at the Cock ‘n Bull, possibly by a bartender who was looking for a way to get rid of excess inventory.

Whichever, it was a way for two companies to marry their products and create a market that took root on both coasts. To further enhance the marketing, the drink was served in a copper cup. That gimmick stuck and became the proscribed way to serve the drink. As testament to the revival of the drink: the caterer at the previously mentioned wedding had enough copper mugs for a party of 200 people.

What started this revival? Well how about the ubiquitous Oprah Winfrey. She included a Moscow Mule kit as part of Oprah Winfrey’s Favorite Things List in 2012.

Want to make one at home:
2 ounces of quality vodka
1 ounce of lime juice
Ginger beer (may be spicy ginger beer)
Lime wedge
Pour the vodka and lime juice over ice cubes in a copper mug. If you don’t have such a mug use a cocktail glass. Top it off with some ginger beer. Garnish with the lime wedge.

I’m not a camper. But I have to wonder who brings sugar syrup and fresh mint on a camping trip, even if they do have vodka, ginger beer and lime.

THE COMEBACK OF THE PERFECT MANHATTAN – II

A comeback from where?

In my early adult years my cocktail of choice was a Manhattan, the plain old version, except I preferred mine on the rocks. One night at Scandia restaurant on the Sunset Strip in Los Angeles a waiter suggested that I try a Perfect Manhattan instead. It was served on the rocks in an Old Fashioned glass. The usual maraschino cherry was replaced by a lemon twist. One sip and I was a convert. The Perfect Manhattan became my cocktail of choice and remains with me to this day.

Sometime during the 1970s many of the old standard cocktails, including the Manhattan, faded from popularity. Generations of new young bartenders would reach for their recipe books when I ordered a Perfect Manhattan. If I was at the bar I would save them the trouble and walk them through the steps. If I gave the order to a waiter to take to the bar there was no telling what might arrive at the table. At best, I would order a Perfect Manhattan, stress the Perfect part and get a plain Manhattan. The recipe book said use a long stemmed martini-type glass and it said nothing about “on the rocks”, so my call for “on the rocks” often didn’t register.

Jennifer and I spent five weeks touring England, Scotland and Wales a few years back. We stayed in some pretty swank manor houses and castles. I had to run a Perfect Manhattan school for bartenders there just as I was having to do here at home.

Even before the Manhattan and Perfect Manhattan faded from the bar scene, I had a different issue with which to deal. On the east coast a Manhattan was made with rye whiskey. On the west coast bars didn’t stock rye. I tried a number of whiskeys before deciding Canadian Club came closest to the east coast version. For years I ordered it that way.

Then Jennifer and I headed for a vacation in Ireland. At a restaurant called Eden in Dublin I ordered a Perfect Manhattan and asked if they had any rye whiskey. When told they didn’t, I asked for Canadian Club. They didn’t have that either. But the bartender told me she would make it with Maker’s Mark and if I didn’t like it she would take it back at no charge. I was encouraged by the fact that she knew there is such a thing as a Perfect Manhattan and seemed to know what kind of whiskey would work. So, I accepted her offer.

Bingo. A winner. In the months and years that followed I would tell everyone I knew, who liked Perfect Manhattans and had been following my Canadian Club advice, that they now should switch to Maker’s Mark. Many did.

That 2010 feature at Table Talk atLarrys.com turned out to be beyond prophetic. The Perfect Manhattan is back. And with only one small hitch, you can order one at almost any bar and get the correct drink. Ask for it on the rocks and you’ll most likely get it on the rocks. And it will be the Perfect version. Just be sure to stress that you want a twist and no cherry. Not everyone has that part down yet.

It’s mostly in the vermouth.

A Manhattan – perfect or otherwise – is whiskey, vermouth, angostura bitters and either a cherry or a twist. A plain Manhattan uses one part whiskey and one part sweet vermouth with a dash of bitters and a cherry. Some bartenders may skip the bitters in a plain Manhattan. It’s kind of a sweet tasting drink.

A Perfect Manhattan is not as sweet. It calls for one part whiskey, one-half part each of sweet and dry vermouth, a dash of bitters and a twist. Just that simple. A whole different drink, much smoother. So, that’s my order: Perfect Manhattan on the rocks, with Maker’s Mark and a twist, no cherry. And I never order anything to eat until the last drop of the booze has been ingested.

As for the whiskey, most decent west coast bars now stock a variety of rye whiskey labels. In deference to my east coast roots I’ve tried a number of them and decided I prefer Maker’s Mark.

I tried a Moscow Mule once decades ago. I didn’t like it. But, then, I’m not a vodka drinker. So, I’ll stick with the elegance of my Perfect Manhattans and get a kick out of how the younger folk are resurrecting the cool, refreshing Moscow Mule.