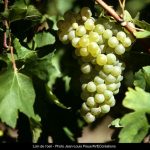 When I was a boy in the 1950s, I really believed in the “Little Old Winemaker” ad – he who carefully crafted great wines by himself – even though I had only tasted its one known competitor: sweet Manischewitz made from red Concord grapes.

Well, I finally found the winemaker who does it all himself – although he is not old and he lives and works in the Gaillac region of south central France, 30 miles northeast of Toulouse.

The discovery started when Bev Wellman and I spent a week in September 2014 working with our friend Michel Grossetti, Research Director at the University of Toulouse-Mirail. Michel, like us, enjoys good wines. Our friend Arent Greve from Norway flew down to join us and enjoy the intellectual stimulation and cuisine.

After a few days of heavy-duty conferencing, Michel said, “Let’s take the day to visit a wine region you’ve never heard of: Gaillac.” He was right. We knew of Burgundy, Bordeaux, Champagne, and Cote-de-Rhone. Apparently, there are lots more. Gaillac itself is an Appellation d’Origine Contrôlée, with some of the oldest vines in France.

The four of us drove the next day on Autoroute A68 to Gaillac. Our first stop was at a sales room of a wine cooperative, where a dozen small local wineries showcased and sold their fine, young, and drinkable wines. Almost all cost less than 10 euros. Our friend bought a case of white, and we tasted various wines pleasurably. There was one salesman and no other customers.

Unlike California, where wine tasting has become a profit center, tasting was free. Indeed, Michel told us that few wineries in southern France were even set up for the tasting ritual. It was great to see good, cheap wines sold simply – like at an indoor farmers’ market in North America.

We especially liked the fresh whites made from the Loin de l’Oeil grape. (Translation: “Away from the Eye”.) Why such an unusual name? On Wikipedia, “Wine expert Oz Clarke” explains “the name refers to the position of the fruit in respect to the bud: the clustered grapes have long stalks that attach to the fruiting cane at a distance that is farther from the bud (or “eye”, oeil in French) than most grape varieties.” (https://en.wikipedia.org/wiki/Len_de_l%27El; accessed: May 9, 2015).

Lunch was up the road in the city of Albi, population 50,000.  It’s the home of the Toulouse-Lautrec museum – he was born in Albi – and of the monumental Sainte Cécile cathedral, started in the late 13th century to embody the violent suppression of the Cathar religious dissidents. That was then; now the center of the town is lovely, overlooking the beautiful Tarn River. I had duck confit—the emblematic dish of south central France.

Michel promised something better after lunch. “Would you like to see someone who totally makes his own wines”?

We went to the nearby town of Gaillac itself, population 13,000, and hooked up with Pascal Ducournau, who taught at the university center in Albi. He promised to take us to the lone winemaker.

We drove through the countryside, with the main road leading to a byway, which led to an even smaller byway, which eventually led to a well-rutted dirt road. The sightseeing was glorious –field, cows, and hills. After an hour I began to fear I was being taken to the start of the Rocky Horror Show. Finally, we stopped at a rickety barn in a wooded area, where a mid-sized black dog barked at our heels when we got out. This was the “Domaine du Vieux Saule” (old willow trees), whose motto is “Nature & Progress”.

The winemaker emerged from the trees. He was nothing like Dr. Frank N. Furter. Rather, Jérome Hyvernat looked like the forest dweller he is: bearded, slight, soft-spoken, and in his mid-30s. He was clad in a flannel shirt, jeans and giant black rubber boots. He had worked for the French forestry service for 10 years before he decided he was going to make wine by himself – the right way.

Jérome led us into his rickety, creaking, old barn. It was where he did his one-person production with a hand-cranked horizontal drum to crush the grapes he had picked himself, a machine to press the wine juice from the skins, and finally two large fiberglass vats to age the reds – mostly Brocol – and the whites – Sauvignon and Loin de l’Oeil. The vats stood close to 18 feet tall. Jérome told us he would like to have stainless steel vats, but he could not afford them. He did have three small oak barrels, where he aged his reserve wine for an extra year.

Jérome was proud that his wine was totally organic and handmade from start to finish. A friend did the artwork for the labels, different art for every year. A small local shop bottled the wine for him. He told us he sold 6,000 cases per year, either from the barn or from the organic farmers’ markets he attends on weekends. He has no website or email address. His telephone number is 06-11-92-33-12. The Domaine’s address is 81170 Loubers – population is 95.

Although Jérome had grown and picked all of the grapes himself, he did not call the wines “Appellation Gaillac” because he did not want to comply with the complex rules of being an Appellation. The 2012 red and the 2011 white each sold for five euros; seven for the red reserve that had spent an additional year in the barrel. When Jérome poured them, they all tasted fine. Of course, wine tasting was free.

We chatted, and our friend Michel bought several cases.

While we were chatting, a young couple came in. “Hi,” she said in a pure Toronto accent.

“Amazing,” I said. “We live in Toronto too, downtown.”

She told us, “We’re here to buy some cases of wine for our wedding. I met my fiancée when he came to work on an organic farm in southern Ontario. I followed him back to France, and we’re trying to make a go of it with an organic vegetable farm near Montauban, east of here, and we got to know and like Jérome at the organic farmers’ market. He does lovely wine – the right way”

“Funny thing,” she said. “The French love good-tasting food, but they don’t buy that much organic. It’s been hard selling at the farmers’ markets.”

Acknowledgements: My thanks to Arent Greve, Michel Grossetti, and Beverly Wellman for help in recalling details. Michel tells me, “I still have some of Jérome’s bottles, and they still are very good.”

BARRY WELLMAN is a prominent sociologist and co-author of the book, NETWORKED. He also is a first cousin to the editor and publisher of Table Talk atLarrys.com