BAD CHEFS FIGHT BACK / when chefs respond to negative comments 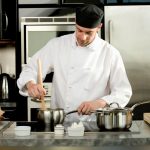 Chefsfeed.com is an interesting website that deserves a look. It features chefs from around the country making video comments on a host of subjects.

What attracted me was “Chefs Read Bad Reviews” – spontaneous reactions to on-line food critics’ comments about their restaurants.

The chefs are identified by name and restaurant. They alternate between reading from pages of negative reviews and looking incredulous.

Here are a few.

Greg Dunmore, Nojo, quotes one critic: “The salmon had absolutely no flavor.” He then raises his head from reading, looks into the camera in disbelief and says: “We don’t use salmon. Never have.”

Jason Stratton, Spinasse. Quoting the reviewer: “It’s not an Italian restaurant. Most of the wines came from Piedmont.” Jason glances off camera for a second, then looks back at us and says, “Which is a region in Northwest Italy.”

Louis Maldonado, Spoon Bar. The quote: “Worst meal I have ever had. And I am old.” His response: “Wow. That’s like saying your mother doesn’t love you any more. These people are so dramatic. And so silly.”

Josh Henderson. Westward. Offers us the opinion of one diner who says: “We ordered the clam dip and fried squid and both dishes were boring, tasteless and uninspired.” Josh contemplates this for a beat than responds. “We smoke the clams for almost an hour in the wood oven. I don’t know how that can be tasteless unless the person was eating without a tongue.”

I didn’t spend any time looking up the restaurants – where they are located or even if they still exist. That’s not the point really.

“Bad Reviews” reminds us that there’s more going on in the dining industry than the unmet expectations of customers with an infinite catalogue of tastes, outlooks and circumstances.

There are also restaurateurs and their staff – some better than others at pleasing their customers, but all now subject to the flourishing subculture of Internet opinion-givers. And just as there may be eateries not worth their salt, there are surely diners with tasteless and insipid reactions to what they were served.

So it makes amusing viewing to watch the chefs turn the tables. There should be more of it.